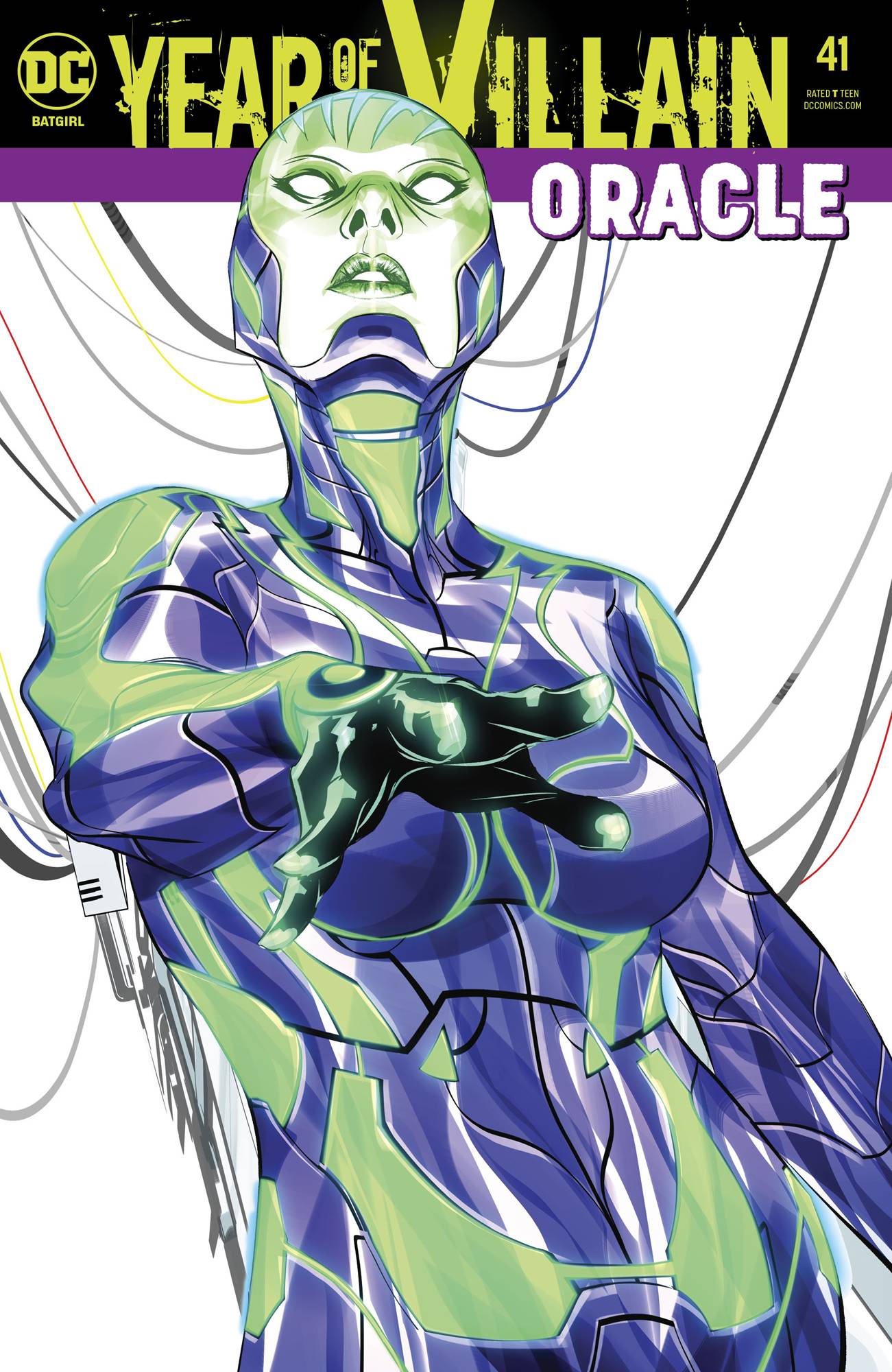 Overview: Batgirl struggles with the aftermath of her first confrontation with Oracle as Oracle puts her plans into action.

Synopsis (spoilers ahead): Batgirl plummets out of the sky into the cold water below.   On the rooftops above, Oracle scans the water, finding no trace that Batgirl has survived the fall. Shark and Fox rejoice, but Oracle remains cautious and order Shark and Fox to collect Frankie, who has been captured by Vulture, who is still under the control of Oracle.  In the waters of Gotham Bay, Batgirl swims deep using a rebreather and ditches her costume.

Meanwhile, at an airport in Washington DC, Congresswoman Alejo and her staff scramble for a flight back to Gotham while Oracle takes control of all of the electronic devices in Burnside, creating an army. Barbara makes her way to the harbor, her air running out, where she is pulled out of the water by emergency workers, with Barbara not breathing.   As she drifts into darkness, Leslie Thompkins performs chest compressions to revive her.

Jason Bard arrives in Burnside, storming passed the police blockade looking for Barbara. Meanwhile, Oracle orders Shark and Fox to round up the remaining residents of Burnside, telling them she will keep the residents “safe”. Jason Bard finds himself shocked into unconsciousness by one of Oracle’s machines, waking up to Frankie looking over him as he finds himself as another prisoner of Oracle. Oracle announces to Frankie, Jason, and the other residents that she is there to save them and that she won’t abandon them as Batgirl has.

Oracle tells Frankie that she will live at her whim and identifies Jason as an enemy of Batgirl, and therefore a friend. Vulture alerts Oracle with an image of Batgirl’s discarded costume and sends out her minions to search every hospital for Jane Does.   Barbara is then shown sleeping in her hospital room as she is attacked, and then subdued by a medical robot. Barbara then runs into Leslie Thompkins who gives her back her costume. Disguised as a doctor in scrubs, Batgirl narrowly slips passed Oracle and the trio, as they find her empty hospital bed with a note that says “Maybe you don’t know me as well as you think” as Batgirl rides off, telling herself that she has to rescue Jason Bard.

Analysis: This issue attempts to bring Oracle’s plans and motivations into focus. Oracle has, to this point, felt a bit directionless, so actually spelling out what it is that this new villain wants, aside from just being really mad at Batgirl is welcome. That being said, I find her big plan, to save Burnside, to be a bit out of nowhere. I think what the writer is going for is for Oracle’s big plan to be an extension of whatever mission that Barbara put into her programming.  This makes sense but I find that to be poorly executed and if that is what Oracle’s big aim was all along, then it makes the angry robot with abandonment issues completely unnecessary.   Oracle as a cold, inhuman force that “knows what is best” for humanity is an interesting idea and I like the perversion of what Barbara intended the Oracle program to be.   It does make me feel that the story has been spinning its wheels unnecessarily and feels like the previous issues were stalling while the writer tried to figure out what to do with this character.

I also think it’s a little overly convenient and a little lazy that there is an army of robots just waiting for Oracle to take control.   It feels like the most surface-level use of what could be a terrifyingly powerful villain. Castellucci has yet to tap into the potential of this character, and at this point just seems content to have her set some fires and commandeer some ATM machines to do her bidding.   Having this all-knowing, all-powerful entity fooled by Batgirl in some scrubs and a surgical mask, also feels like a bridge too far.

The issue is also poorly plotted and feels crowded and not terribly well thought out. The issue itself hinges on Batgirl going off at the end to rescue Jason Bard, but doesn’t actually take the time to show that she is aware that Jason has been abducted. It’s like the writer had a hard line of events for #82 and had to cram this issue full of plot in order to get there.

The art continues to be a saving grace for this arc. Di Giandomenico does a great job with the scenes of Vulture under Oracle’s control and the images of Oracle stretching out her humanoid form, giving the scenes a creepy feeling that works well for this villain.

Final Thoughts: Overall, I just want this storyline to be over. Oracle is a fine idea, but this writer has no idea how to write a villain like this and as a result, is just wasting time, money, and the ink this comic is printed on.