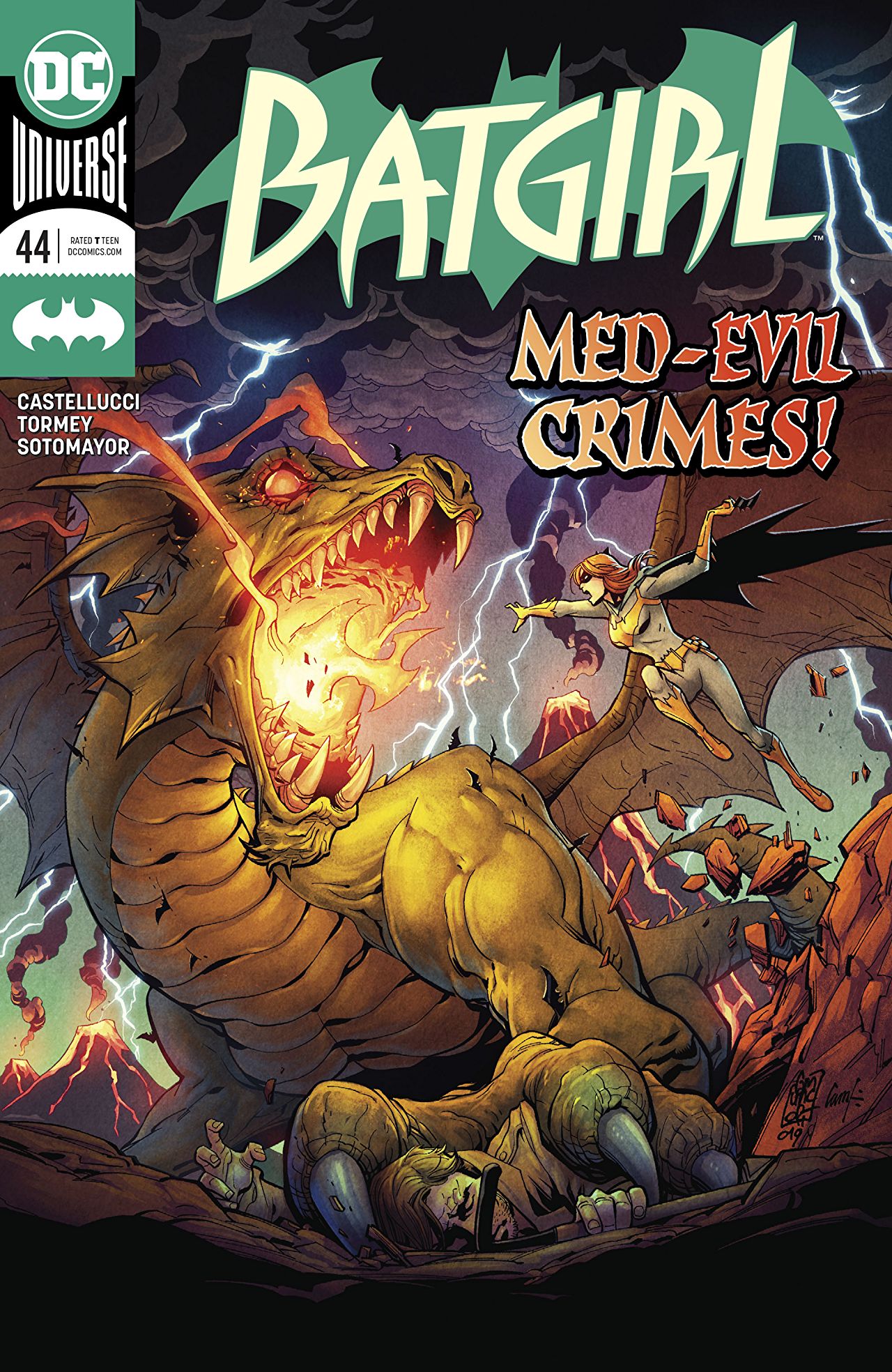 Overview: Batgirl and Jason Bard must work together to discover their feelings in the Maker’s deadly fantasy world.

Synopsis (spoilers ahead): Batgirl and Jason Bard, trapped in fantasy-writer-turned-supervillain the Maker’s world and fighting a dragon of the Maker’s creation, discover that the monster feeds from the emotions of Batgirl and Bard’s new love – or more precisely, their fears caused by that new love.

First, Batgirl tries to arm herself with courage, but that doesn’t dispel fear, as images of the Joker, her recovery as Oracle, and her work as Oracle twisted by Lex Luthor’s Year of the Villain plot flash through her mind. One of the Maker’s creations, the sidekick “Travesty,” rushes in as Batgirl struggles to think of a surprise ending to this fantasy story – but is instantly destroyed by the dragon’s fiery breath.

Batgirl gets Jason to open up about his feelings for Barbara, warming the heart of the Maker, who forges a ludicrously huge sword with his own love and gives it to Batgirl. To defeat the dragon, Jason must get the heartscale, but the heat of the dying beast slays him. Batgirl demands the Maker resurrect him, and though the villain denies her, the Maker’s beloved sacrifices her chance to live in the real world again to save Jason. As the Maker and his love choose to stay in their created fantasy world, Babs raises Jason, and the duo escape through a portal.

Jason and Batgirl part ways, both intending to work on their relationship and trying to grow past previous conflict. Batgirl follows Bard, trying to beat him to the location, so she can change back into Barbara Gordon. She sees him helping a homeless girl, which warms her heart. However, she finds the girl he helped being covered by growing liquid metallic substance, and Jason, whose leg she injured severely in Batman Eternal, impossibly running away.

Analysis: Cecil Castellucci, having wrapped up her first arc rehashing the “Oracle is a villainous computer program with a robot body” from the Burnside run, only significantly worse, closes a two-part fantasy arc exploring Babs and Jason Bard’s romance. What could be a serious, moody, and romantic piece of character study, exploring the ways that Batgirl has hurt Jason and ways Jason has hurt Barbara, turns instead into a gaudy, shallow, and utterly useless piece about a fantasy world where nothing matters, none of the characters have any strong connections to each other, and “character development” is simply said out loud in dialogue instead of acted out by the characters.

Cian Tormey proves a somewhat disappointing fill-in for the past regular artist, Carmine di Giandomenico, who drew a sketchy but powerful Batgirl. Though Tormey often turns in an appealing, cartoony panel and does a strong job with the fantasy flashback panels, his work is incredibly uneven, sometimes showing Batgirl looking strong and appealing, sometimes very different for no discernible reason. His rendering of the dragon also leaves quite a bit to be desired – never quite impressing with a solid design or image and instead relying too heavily on generic fantasy tropes. All in all, this arc of Batgirl is over and probably forgotten quickly, as the next arc’s villain rears their head in the final pages, leaving the reader both unsatisfied and frustrated that Batgirl hasn’t been able to actually establish anything about her relationships or status quo, instead plowing through thinly drawn fantasy villains and their uninspired constructs for two more issues.

The main cover for this issue by Guiseppe Camuncoli is a lovely fantasy piece with a gorgeous rendering of Babs in her current costume. Though the mix of fantasy and Batgirl is still somewhat odd, it’s at least very appealing. The card stock variant by Terry and Rachel Dodson, unfortunately, feels much inferior, both to the main cover, and to the previous work of Joshua Middleton on the variant covers. Trying to create a dramatic effect, the Dodsons instead make Babs feel slightly cranky, and the attempts to make her very light-hued suit feel intimidating don’t quite work, the grey and yellows sapping the intensity of the costume. This suit can be intimidating if drawn correctly – probably in silhouette, with just highlights of color shining through the shadows – having her pinned to the wall by spotlight doesn’t achieve that effect.