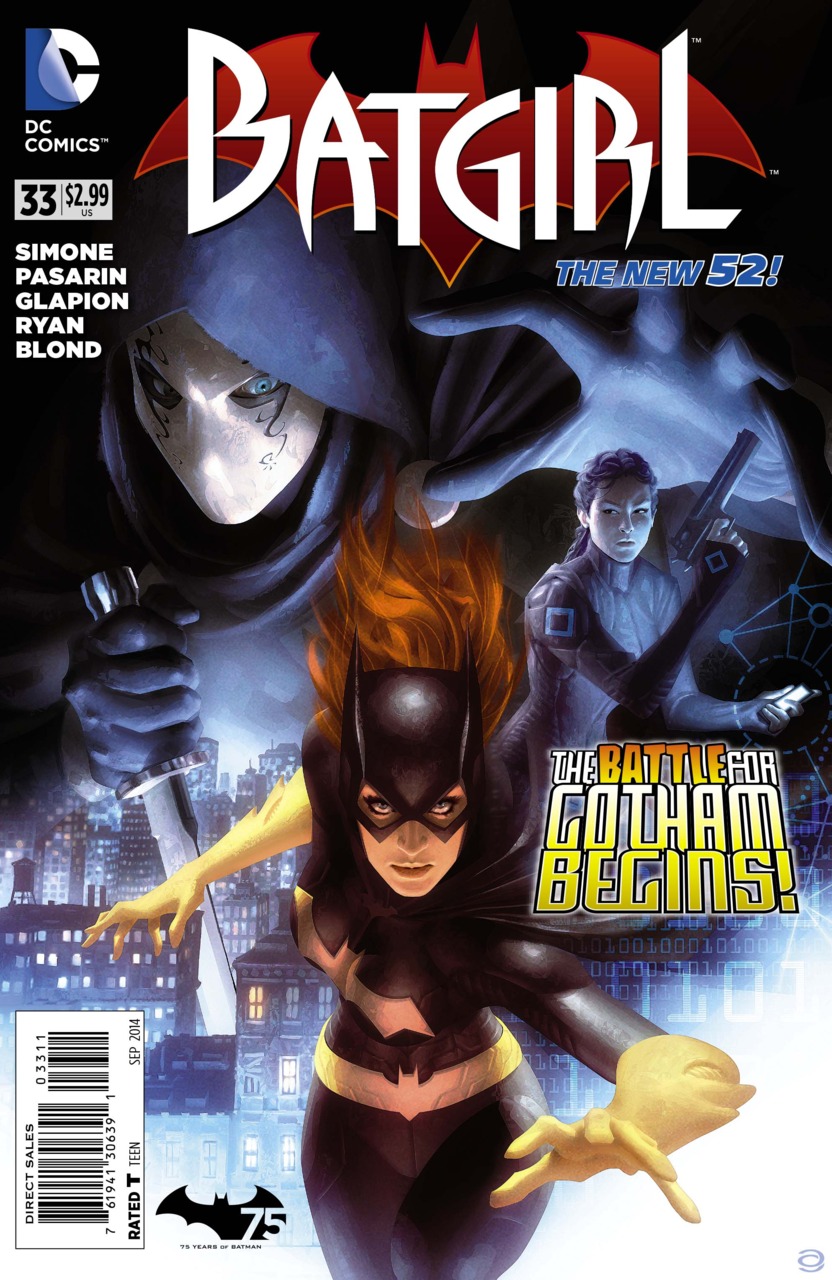 As I write this review, I'm so happy to say that Batgirl will be among the current struggling bat-books that will be getting a new creative team starting in October. What the new team has planned sounds 10x more interesting than what we are getting right now. Alex Garner's cover is awesome. And that's about one of the only good things I can say about this issue.

Simone's characterization is SO BAD. They are always portrayed as being weak, or flat out dumb. Her story lines seem okay, but they are filled with plot-holes. And she puts in unnecessary sexualized material to make a demographic happy, when it serves no purpose to the story.

Pasarin's art doesn't look so great here, either. His actions sequences are really good, and he captures movement great. But his women's faces all look the same. And there is some anatomy issues. There is a panel where Michael has his head turned, and it made me think of an owl, it was turned so far.

Batgirl and Black Canary have met Huntress for the first time. Babs sees a woman in purple, and immediately thinks of Knightfall, and beats the living crap out of Huntress. Blood is going everywhere, and Black Canary has to pull Barbara off to make her stop. What the heck?! Who in the world is this?! She punches first, and thinks about it later. And then Canary says that she is normally pretty rational. That she's usually the thoughtful one. I'm gonna quote Babs' internal monologue for a little bit: "When did Batgirl become THAT girl? That girl who strikes first, and never thinks?"… Um, how about since the New 52 started and with Simone's writing. You can continually contradict what you yourself are writing. I can excuse people contradicting what others have done, but doing that to yourself, is lazy and just bad writing.

Babs gives Huntress a towel to wipe the blood off, and she explains how she's not from here. Then they work out a plan.

Later, Barbara goes home, and wakes up her roommate at four in the morning to give her some pastries, and talk about Jo… No one cares. This was so that we could get a scare when Alysia says she knows Barbara's secret… She's an undercover cop. So Simone is telling us that Alysia = Stupid. So Babs gets her to tell her who hired Alysia to plant the bomb a few issues back, and she tells her Michael.

Canary, Batgirl, and Huntress wait for him to go to his car, and attack him from there. They take him down, and hang him from a crane, so he can't use his powers. Bonebreaker tells Knightfall that they have Michael, while she is sleeping with two guys, which adds nothing to this freaking story! They call in a team to go up there, and take out, not the Birds, but Michael so he won't tell the plan. They save Michael, and he tells them that Knightfall is going to release every criminal. That's right. Even the ones who she was putting away. This makes no sense. So Babs calls her friends to help her so they have an army to stop Knightfall. Thank God this is almost over!

The writing is dog crap. The art is just ok.