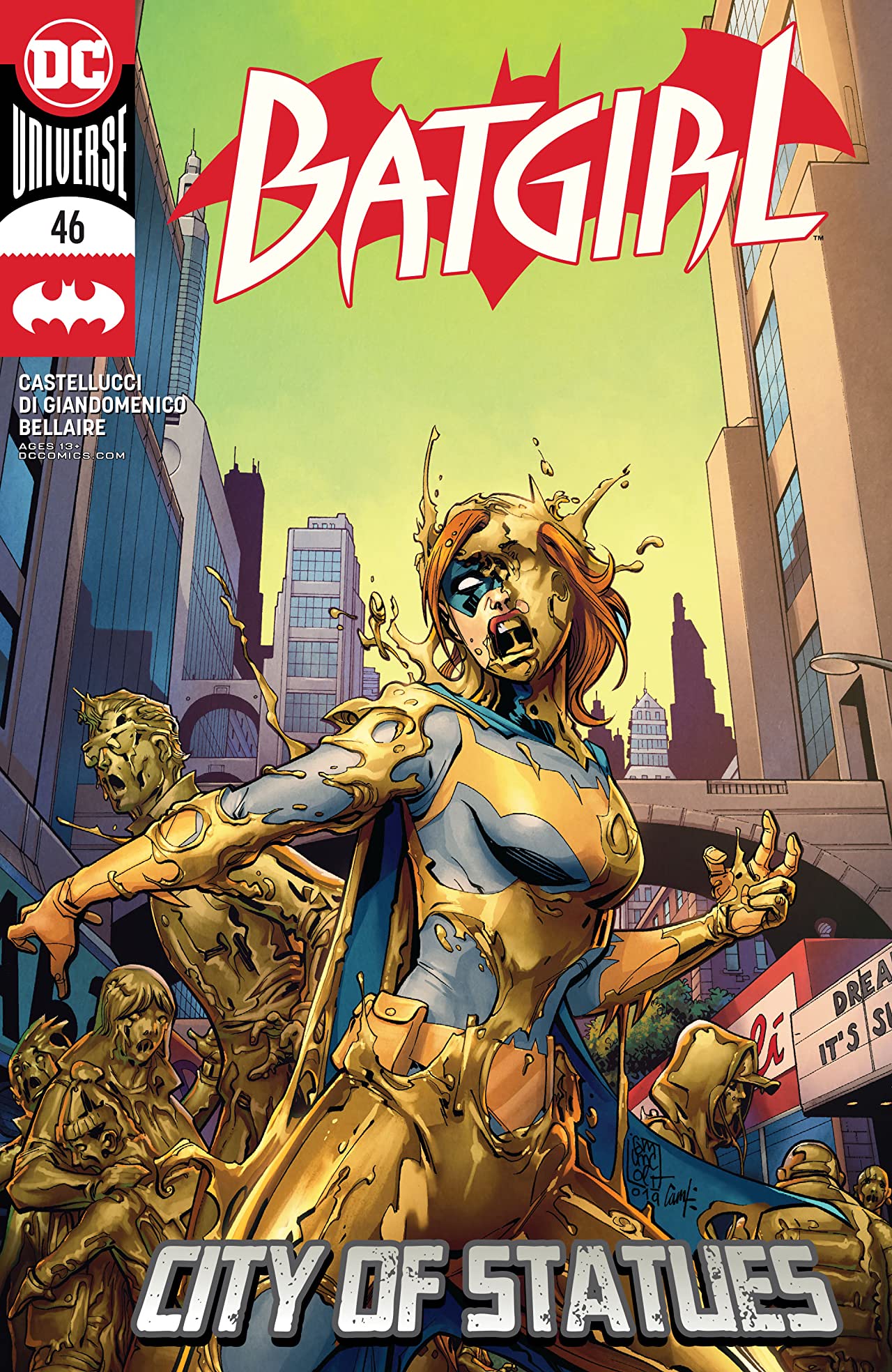 Overview: Things get lit as the Batwomen face the electric mind of Dasha Berlova and the enhanced cybernetics of the KGBeast in the conclusion of this two-part arc.

Synopsis (spoilers ahead): Deep within Gotham Substation #214, Batgirl has been caught and trapped by Dasha Berlova, working with the KGBeast, who hoists her over a vat of liquid metal. Babs’ arms are restricted by the metal bindings of the vise, the heat of the boiling metals below are neutralizing her remote toggles, and Batwoman is unconscious below. Luckily, Barbara Gordon has learned many lessons over her crime-fighting years, and she releases a laser-torch from her glove and works on freeing herself as Dasha rejoices below. Trying to not only get information but also to create a distraction, Batgirl asks who is living in the metal, knowing that Dasha, like so many other villains, loves her monologue.

When Dasha was seven years old, her mother had been running an electrical experiment that had gone awry, fusing the people of her village with gold. Dasha fashioned the remains of her mother into jewelry to keep her close, only to find shortly after that she began hearing her mother’s whispers from it. Dasha collected all of the gold from her village, each piece carrying the voice of one of the villagers. Following the theoretical advice of her mother, Berlova attempted time and again to breathe life into the gold and release the lost souls from within, but to no avail. Not, that is, until she came to Gotham and began experimenting on the homeless.

Batgirl finally frees herself and lands to safety on the edge of the vat. KGBeast takes aim and begins shooting at Barbara, who easily dodges him as Dasha continues to expound on her plot. The combination of the Beast’s firing and the acceleration of Dasha’s output into the gold causes the vat to react, zapping the beast with electricity, though his cybernetic system prevents him from losing consciousness. Close by, Batwoman slowly begins to regain her own.

Barbara, seeking safety higher up on the machinery, warns KGBeast from firing anymore, but the Beast throws his shoulder into the machinery, knocking her off. Before he can get the better of Batgirl, Batwoman shoulders him out of range. Barbara doesn’t get any time to recover, though, as Dasha introduces her to the Berlova ‘family’ by assaulting her with sharp, knife-like shards of jewelry. Batgirl manages to dodge them, and the jewelry instead incapacitates Dasha’s henchmen.

Batgirl and Batwoman, on the defensive, back into each other and regroup before using each other’s momentum to kick back at the adversaries, knocking them both down. Dasha pleads with Batgirl, and the pair debate on the value of ethics when it interferes with ‘the greater good.’ Deliberating with Batgirl was only a distraction on Dasha’s part, who has been coming up with a new theory for her experiment. She orders KGBeast to throw the dead henchmen into the vat and to flip the switch. Batwoman tries to stop him, but is too late, and the body is flung into the liquid gold. The reaction is instantaneous as Dasha, who has now entered the vat herself, lights up with electricity and glorifies herself as her body begins to change. From the gold, Russian voices can be heard, and the gold-encased bodies of Dasha Berlova’s henchmen begin climbing out of their metal pool.

KGBeast, who has erstwhile been battling Batwoman, notices some changes himself: his golden arm is also reacting and, in a panic, begs for Batgirl’s help. Batgirl, beset and in a stranglehold by Dasha, orders Batwoman to cover her while she severs the connection. Batwoman uppercuts the KGBeast’s golden arm, severing the experimental gold from the Beast’s cybernetics before covering him from the ensuing explosion. Barbara then flings Dasha over her body and into the pool of gold.

From inside, Dasha’s mother gurgles for her daughter, and Berlova swears vengeance on Batgirl for taking her mother away yet again. Barbara reaches for Dasha to retrieve her from the vat, but Dasha is now mentally gone. She insists on staying with her family, to complete the circuit and bring them back. Barbara tries to talk sense to her, but it’s far too late as Dasha absorbs all of the electrical output and explodes into a ball of light, causing an EMP.

Hours later, the substation graffiti-ed with electric gold, Dasha Berlova, ranting that her family is alive in the walls, is being carted off to Arkham Asylum. Barbara mourns the waste of a brilliant mind that reached too far and severed itself from the world it had hoped to help. Batwoman says goodbye, as she’s off to pursue the escaped KGBeast. The two shake hands.

A week later, Congresswoman Alejo cuts the ribbon on her new achievement: The Old Gotham Green City Substation. Barbara Gordon questions her use of Dasha’s criminal work, given the means and the end. Alejo reasons that you take the opportunity to use a horrible situation for the good of the people, showing perhaps her true colors as a politician.

Barbara and Jason Bard, disgusted with this side of Alejo, decide to play hooky for the rest of the day to have a lunch date at a taco stand, which Barbara uses as an opportunity to see if there is some hope for her and Jason. They spend the rest of the day bantering playfully at first and then edging into flirtation. Bard opens up on how he’s been jaded, which Barbara does her best to alleviate by providing other perspectives. As the sun sets on Gotham, the chemistry between the two brings them together in a kiss.

Later, finishing a phone call with Jason, Barbara prepares to retire for the night and enters her apartment. As the issue closes, we see her open the door, knowing nothing of the figure waiting for her behind it. The Joker!

Analysis: For a two-issue story arc, this has quite a bit going on. We have a nice, yet rather tidy wrap-up in an era of six to one hundred issue arcs in comics, and it’s a bit of a nice reprieve. Knowing that Joker War is coming, I’d expect to see some rushed-together writing along with hurried art, but the storytellers clip this one pretty well. We get an origin story in a monologue that Barbara telegraphs as if she were reading a comic book herself, and that fourth-wall-breaking was a bit funny.

We get a classic mad-scientist scenario, complete with cliffhanger death machine from the previous issue, but I rather like her motivations and origin story. We often get the trope of the parent(s) dying before the child’s eyes and the resulting psychoses that the scene inflicts upon the target character, but imagining young Dasha melting what must have been a horrific image of her mother into jewelry in order to keep that memory close to her is a bit heartbreaking. Her world decimated, all she ever wanted was to bring it back, and with her genius (and also whisperings from the brilliant dead) she actually thought she could, never realizing that while she actually was able to manage to bring life into this world, that life will never be able to live in the past as she did. And now, that corruption of her motives, and the degradation of morality, has left her with nothing but a cell at Arkham Asylum.

Speaking of corruption of motives and degradation of morality, we now have a more subtle nemesis foreshadowed in this issue. Congresswoman Alejo has turned over a new leaf, and chances are that this will affect Barbara Gordon’s life more than it will Batgirl’s. It does bring her and Jason together a bit more, however, and that is the most interesting setup in this story. The relationship bloomed quickly in this issue, and I myself felt the pace of it. I wanted more of that storytelling, but I know that it’s also JUST enough to get things progressing organically.

I’m not quite sure why the KGBeast, specifically, was needed for Dasha’s storyline. She needed some muscle, of course, which is his specialty, and I suppose the promise of enhanced circuitry is a great selling point, but he really did seem more like a cameo and a reason to connect Barbara’s story to the Greater Gotham than anything else. I would’ve liked more details on how he and Berlova got wired together.

The very last few panels, we see the Joker approach and enter Bab’s apartment. Along with a referential tagline, again Batgirl fans are getting a reminder of a certain celebrated and divisive storyline. Though this time the Joker is on the opposite side of that door, how much of a nod to The Killing Joke can we expect? We’ve already had the avatar of Oracle looming above the title for some time, and it seems possible that history might repeat itself.

Final Thoughts: A well-crafted ending to a short arc that contained quite a bit of content and gave us an emotional epilogue that leads into not one, but two leading men for the next storyline.