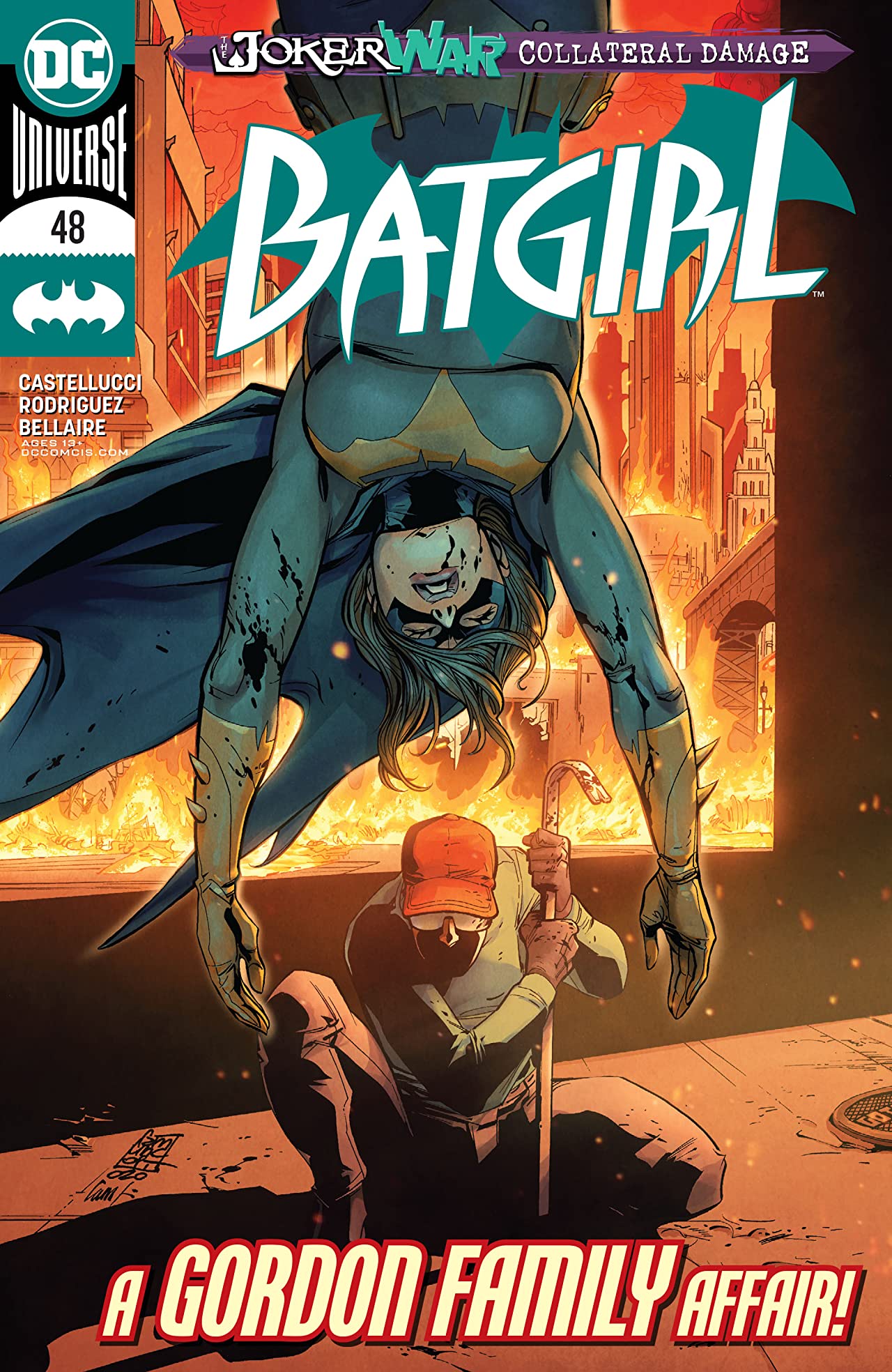 Overview: In the aftermath of her battle with the Joker, Barbara struggles to reimplement her priorities.

Synopsis (spoilers ahead): The issue opens up with Barbara suffering from a fever dream in which her father, brother, and the Joker play a tug of war over control of her destiny. James Jr. vies for their father’s attention by trying to usurp her role in the family and ultimately resorting to defy the family principles, Jim Sr. stepping in and attempting to martyr himself for her, and the Joker becoming the all-consuming power that threatens to lay waste to all she’s strived for.

She awakens in a hospital room, where she finds her brother, James Jr., watching over her. He tries to reconcile with her, and to show her that not only is he wishing to turn over a new leaf, but wants to be part of the family again. Though wary of his intentions, Barbara confides to him the events from the previous issue. After realizing her implant is still on the roof of her apartment building, she somewhat reluctantly accepts her brother’s assistance in helping her back to the scene of the crime to find it.

Shortly after their arrival, their father shows up and immediately takes James Jr. to task. The men argue heatedly about each other’s motivations and actions until Barbara shuts them both down and searches on her own. The two conclude their argument on the street with a loose understanding that James Jr. will stay away from the family.

We cut to a short scene in which a red-haired woman gets attacked.

Babs struggles to fix the implant, but finds that she’s lacking in this particular area, and resorts to looking for help, ultimately landing on Luke Fox, who has just landed in Gotham himself, summoned there by his father. He goes to Barbara first, and together they are able to fix and reinsert her implant. She tells Luke that she’s seeing someone after he’s laid down a few hints at rekindling their romance.

Refitted, Batgirl is eager to get back to work. Ignoring the constant texts that the various men in her life keep sending her way for her attention, she hits the streets.

Police dispatch and the news reports on a newly discovered murder victim. Barbara and Jim are both en route, while James Jr. carves into a bureau with a knife, presumably replaying the conversations with his sister and father from earlier, and struggling to deal with his role.

At the murder scene, Commissioner Bullock and some officers look over the body of the victim while Batgirl watches from above. As the cover is removed from the body, we find that the red-haired woman from earlier is the victim, and that she’s been placed in a Batgirl costume.

Next: Who Killed Batgirl?

Analysis: As the previous issue dealt with the layered encounter Barbara Gordon had with the Joker, her own fear, and being an abuse victim, this one deals with the relationships she has concerning those who, though with good intentions, still seek to hold some dominance over her life. Her father, the hero who coddles her; the brother, who attempts to make amends to their damaged relationship by basically miming their father.

These two, however, don’t seem to understand the selfishness of their actions. In fact, when they encounter each other, Barbara has essentially been left out of the conversation altogether. Even when she dresses them down in their own behaviors, they continue bickering at each other after she has long left their sight.

Even Luke Fox, when called upon for help, can’t seem to help to try to be something Barbara doesn’t need, nor has even asked for. Jason Bard, for his part, decides to give Babs the time she needs after the second unanswered text.

Barbara Gordon’s struggle in this issue is to assert herself as a woman who isn’t the damsel in distress. She knows her way. She’s already got this figured out. Though the motivations of others can get not just in her way but also their own, we get to see that it’s not going to slow Barbara Gordon down one bit.

As if this isn’t enough, we learn even more into the concept of who gets to control Babs’ destiny, as we now have someone attempting to ‘kill’ Batgirl by finding a lookalike and dressing her corpse up in the uniform.

Final Thoughts: This was a decent aftermath story that focuses on the not-necessarily-right way to handle caring for someone. In the past, I’d expect Barbara lying in bed, and the Man Who Feels Responsible For Letting Her Down always has the right thing to say while placing the blame (and attention) solely at his own feet. We don’t get that here; I can feel the inward sighs as each person takes the place of the other in order to be the one she needs with their self-serving (though mainly well-intentioned) needs.