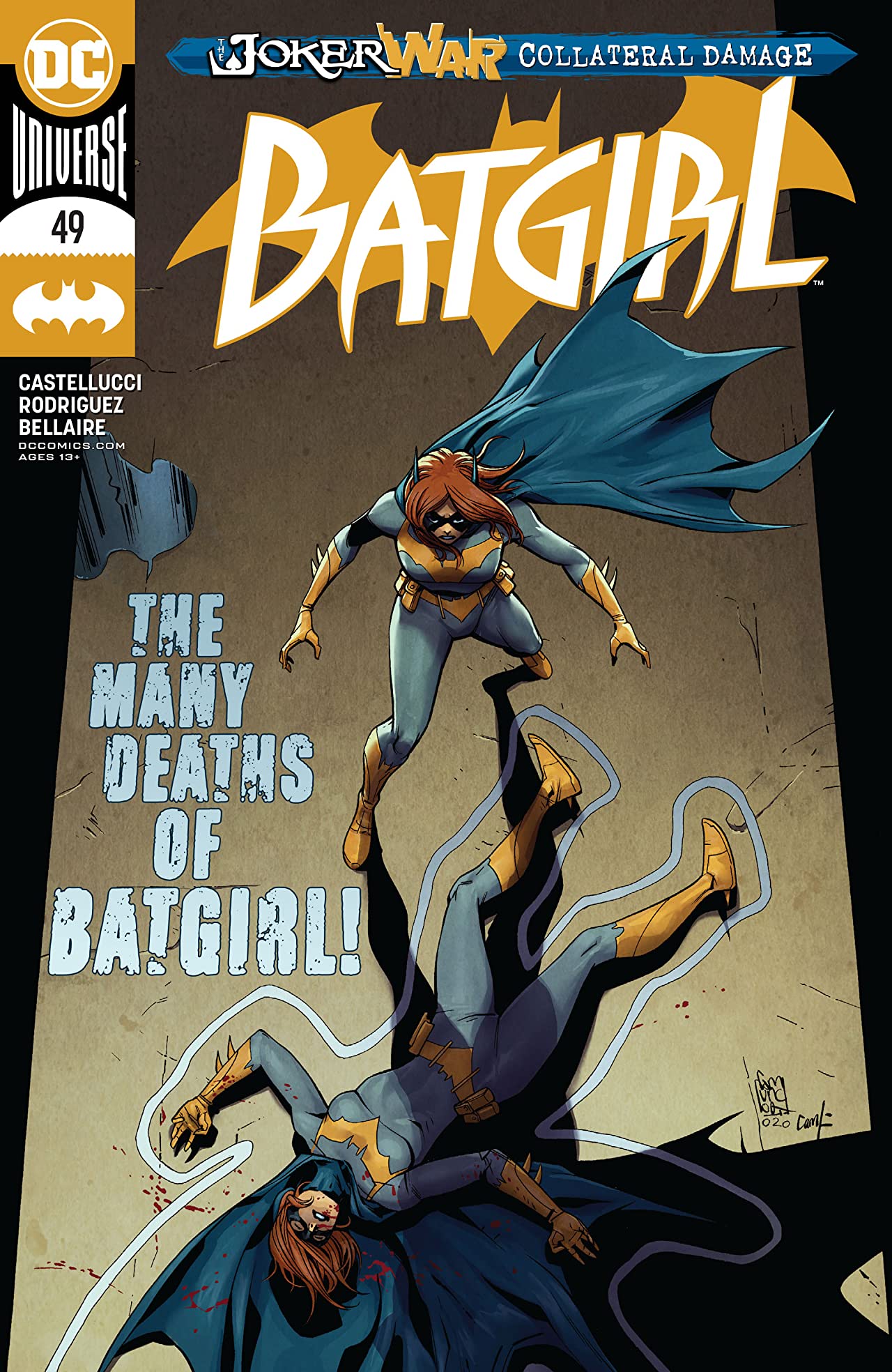 Overview: In this Joker War tie-in, the Gordon family races to stop the Redhead Killer and save Batgirl.

Synopsis (spoilers ahead): Somewhere in Gotham, an unknown man is mocking up an abducted young woman to look like Batgirl. Through photographs being used as models, the abductor also seems to know that Barbara Gordon and the vigilante are one in the same person. The woman, gagged and bound to a beautician’s stool, is alive and aware of her situation before her abductor finishes his work of art by snapping her neck, killing her.

We are then taken to a short time earlier, following the events from the previous issue. Former Commissioner Gordon and acting Commissioner Bullock look over the dead Batgirl found at the scene. Apparently removing her mask and sending samples to forensics, the two eulogize a little over the famed vigilante, unaware that from above them, the true Batgirl observes the same scene.

A short while later, Batgirl’s death is all over the news, revealing that her true identity is Marley Evans. After assuring Frankie that she’s okay, Barbara decides to lay low until the circumstances surrounding the event become more clear.

Returning home, Babs finds Jim Jr. waiting for her, still trying to obtain a closer relationship. Barbara brushes him off, however, leaving him on the outs again.

While the media speculates on the life of the newly-discovered Marley Evans, Jim Gordon is summoned to another Batgirl crime scene, and it becomes apparent that another killer is in town. There is hope that the true Batgirl still lives.

Elsewhere, the Batgirl-killer finds and seduces another victim.

Jim Gordon does some detective work, and by the time Bullock finds yet another Batgirl murder, the ex-Commish believes he’s found something that ties the victims together and fears that Barbara will soon be a target.

We get to see a little more of Jason Bard as he checks in on Barbara. He tries to talk about his confused feelings about her death, but Babs tells him she’s probably not the person to be discussing this with while wondering if she should talk to him as Batgirl at some point.

After they part for the evening, Babs is again interrupted by her father, who informs her of the other Batgirl deaths, and that he would like for her to move back in with him until the killer is found. She flatly rebuffs him, saying that she is much better off looking after herself.

A short while later, Jim Jr. looks on as James Sr., worried for his daughter’s safety, knocks on and then enters Barbara’s apartment as the true Batgirl flies off towards the clock tower for her own investigations.

Batgirl hacks into the GCPD database and revisits the crime scenes. Through her deductions, she pinpoints the neighborhood that the murderer is frequenting, and further still, the kill site. She breaks in and cases the place, profiling the killer. She becomes aware of a presence behind her and strikes….her brother! He asks what she’s doing in his apartment. She incapacitates him as he explains that he’s also searching for the killer, worried that his sister is likely to be next. He’s worked out the same deductions that she has made, and even further, believing he’s found the next kill site: the lighthouse. Barbara frees him, orders him to stay home, and thanks him before heading to the lighthouse.

They’re not the only ones to draw this conclusion, as we next see James Sr. staking out the lighthouse himself. Babs arrives on the scene, and James Sr. spies Jim Jr. entering as well.

Barbara descends onto the roof of the lighthouse and sees Jim Jr. sitting there, waiting. Confronting him, Jim Jr. confesses that he is, in fact, the Redhead Killer. He seems to be suffering from a split personality, talking to himself as if he has two separate consciences. We find that the alternate personality has been murdering these faux Batgirls for Jim Jr.’s benefit and also, curiously, that this other personality hadn’t up to this point known that his sister IS Batgirl.

With this self-realization that he himself has been the Redhead Killer and is now targeting his own sister, Jim Jr. makes one final decision to help the family stay together: he jumps from the lighthouse. Barbara reaches for him too late, as James Sr. races up the stairs and watches his son fall.

Father approaches daughter, both of them jarred and raw. James Sr. attempts to arrest Batgirl for murdering his son, as Barbara escapes, confused, and in mourning.

With Gotham’s skyline at her back and a thunderstorm drenching her body as tears flood her heart, Barbara removes her mask and gives up.

Analysis: With one issue left in the series, the Batgirl creative team has delivered a stunning blow to Barbara Gordon’s character. The last few arcs have been personal growth moments concentrating on Barbara’s self-sufficient ability and her strong-willed independence. About never giving up, no matter the circumstances. She’s strong enough to overcome the mental trauma that the Joker forced upon her and the physical pain of ripping out her own implant to escape him. She’s intelligent enough to outwit some of the greatest minds that battle against her. She’s strong-willed enough in both aspects of her life to never be seen as the damsel-in-distress. And now, perhaps, all that strength will cost her. Because Gordons never give up.

Jim Gordon Jr., never gave up trying to redeem himself, even when the ultimate betrayal hit him. There were hints, of course, to Jim Jr.’s turn. For example, a few issues ago we see him ignore his medication alarm in his desperation to find his place within the family once more. The constant rejection of his father and sister, then, could conceivably stir the darkness of turmoil and hatred in that darker part of himself. He attempted to subdue it with medication and his attempts to help, but he also seemed to internalize his emotions whenever Barbara didn’t meet him halfway. Over time, those emotions could leak out in a most unhealthy way, perhaps contributing to the creation of his Mr. Hyde aspect. How horrifying it must have been to realize that, in trying so hard to protect his sister from the Batgirl murderer, he had been secretly zeroing in on her himself? The only option he saw, in order to truly protect the family he so desperately wanted to be part of, was for James Gordon, Jr., to give up his life.

Barbara Gordon now has to suffer from the weight of her brother’s death. The two men in her life that tried the hardest to protect her, her family she pushed away in her independence, are now lost to her, possibly forever. After trying so hard, TOO hard in Barbara’s opinion, to be the father Babs deserves, James Gordon now hates Batgirl, the persona she’s adopted to be like him, blaming her for killing his son. Following the revelation that Jim Jr. was, in fact, the murderer they were all after, Barbara’s also tormented for not just pushing her brother away, but perhaps pushing him so hard that, in his frail mental state, she’s at least partially responsible for creating the Redhead Killer. After everything she’s accomplished and proven to herself and the world, she now doubts that any of it was worth such a price, and now, it seems, Barbara Gordon will give up her life as Batgirl.

Jim Gordon, a lifelong cop and loving father, battled hard to keep his daughter safe from all harm. Safe from the police academy. Safe, as far as he was concerned, from all the darkness that Gotham could throw at her. Safe from her murderous brother. Even when she was the angriest with him, he never gave up trying to protect her. However, after years of trying to believe that James Jr. could be saved and reformed and become a productive member of society, at one point he’d had enough.  He believed that his son would never change, never be more than a cunning and evil monster. He had become so worn down that eventually, Jim Gordon would give up faith in his own son.

I really enjoyed the art in this issue. It’s stylized and is reminiscent of Gotham Academy. The minor issues I have with it are Jim Gordon’s excessive mustache in a couple of panels, and in his one-page appearance, I confused Jason Bard for Jim Jr.

While I prefer the variant cover of this issue, a smiling Batgirl almost joyously throwing a roundhouse kick towards us with a backdrop of a Gotham City in flames, the main one is a better fit for the story. It shows Barbara examining one of the dead Batgirls in an alleyway, outlined in chalk. Most of the time I really don’t care for the additional script on covers (characters with word bubbles, flashy headlines, etc.), The Many Deaths of Batgirl was a nice callback to The Many Deaths of Batman storyline from the ’80s, while also hinting at the idea that the Batgirl persona might possibly have met its end here, too, knowing that the next issue is the last.

Final Thoughts: I feel this story was very tight and action-packed while always keeping the attention focused on the story and leading the reader to the repercussions as we are about to wrap up this series. The storytelling through plot and art were on point. The Joker War wasn’t forced down our throats, while at the same time, the Collateral Damage banner definitely resounds. I’m definitely looking forward to how things wrap up here.