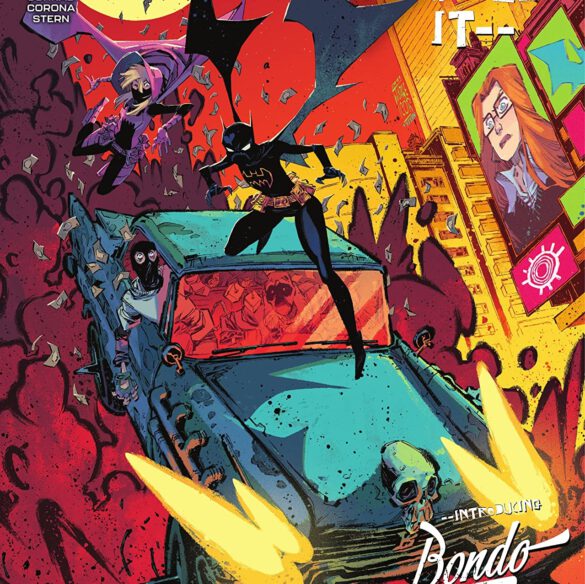 Overview: In Batgirls #2, the Batgirls try to solve the mystery of the ‘Hill Killer’ while staying one step ahead of Seer and the Saints.

Synopsis (spoilers ahead): Batgirls #2 begins in the Hill, as the two active Batgirls face off against the Saints, an extremist cell born from the Magistrate. Marked by the GCPD as violent fanatics of Simon Saint, who in their eyes died a martyr, none of them are to be messed with.

The ringleader is Tarsus, known for his reputation of wicked cruelty and his specialization in torture techniques. He’s joined by two others; Valentine, whose Batman-like origin led her to believe militarized order is the city’s key to redemption, and Assisi, a largely unknown individual who is rumored to have stolen technology to outfit the Saints.

While Cassandra and Stephanie do their best to keep each member of the Saints at bay, Oracle orders both girls to get out of there, which the girls finally manage after an intense fight.

Later that night at their new flat, the girls regroup to plan out their next move, which starts with breakfast. Elsewhere, in an old, rotting church, the Saints are similarly regrouping, awaiting their orders from what appears to be the ghost of Simon Saint. Their command is to kill the Batgirls, an action that would ensure Simon’s return from the dead. In reality, however, nothing so supernatural is occurring; modern technology has given Seer the ability to fool the Saints into doing their bidding and dirty work unbeknownst to them.

Later that day and after breakfast, Barbara tells the girls that she knows for a fact that Simon Saint is dead and that Seer must be behind it all. Clearly, Seer is after her head, and it’s high-time they strike back. While Barbara works on figuring out how to counterattack, Stephanie and Cass will go out as Batgirl to gather more information on the “Hill Killer,” the nom de plum given for their cut-you-up-and-put-you-in-a-trash-bag serial killer.

The girls waste no time, and a short while after Cass and Stephanie are out in their forcefully borrowed car from the thugs they had encountered when they first moved in, prowling the streets. Their search lands them upon the guys they had beaten down some time previously, who’ve gathered at the docks along with a group of police officers. There, it looks as though they’re building a shrine composed of stolen goods.

As the girls return back home, Barbara ends her phone conversation with Dick, saying that she’ll call him back later and wishes him well. Stephanie can barely contain herself as she dumps their newly discovered info on Barbara; the Hill’s angels are burglars who’ve taken all the stolen goods to the docks and the cops are in on it. Sadly, they weren’t able to get any new information about the Hill Killer, but Stephanie claims they should still investigate their grumpy neighbor.

As the girls sit and have dinner, the news report for that evening plays over the TV. The controversy surrounding the clocktower explosion and the accusation against the Batgirls is still abuzz, and while the Batgirls are gone off the streets, nobody is safe.

The next morning, Barbara calls the girls over and hands them each a pair of earrings fitted with micro speakers and transponders. They’re a solution to their inability to communicate while out on the field, and Barbara decides to run a field test that night while Stephanie and Cass attach a single suppressor to the roof.

Both Batgirls quickly get distracted, however, when shouts for help reach their ears from down below. The Batgirls spring into action and stop a robber from getting away. The thief had stolen a man’s slow cooker, which his wife had gotten; the two girls promise to keep an eye out for it.

They then decide to follow the thief back to his hideout, which turns out to be a gathering of people from all over, who’ve come together to listen to a masked man order them to rise against those who would seek to silence the people, to rise against the politicians, the doctors, the cops, and the bats. A chant of ‘rise!’ echoes his demand from the people gathered below, their eyes glowing red.

Peering in out of sight, Cassandra tells Stephanie that they need to stop him. Stephanie, however, doesn’t hear her; instead, her eyes are glazed over red while she mutters the word ‘rise, rise, rise’ to herself.

Analysis: Becky Cloonan and Michael W. Conrad bring the Batgirls back into action in this second installment of the Batgirls series within Batgirls #2. The story continues to be just as fun and wholesome as its first issue, while the art and colors by Jorge Corona and Sarah Stern splash across the pages with a cartoon-esque approach and cool, contrasting colors.

The characterization of each girl, and their interactions with each other, do really nail it for me. First, Barbara is competent, positive, and extremely relatable to most young adults with younger siblings. The inclusion of her conversation with Dick, although his character doesn’t actually appear on the screen, was a really great addition to the story.

The other moments, such as Cass and Barbara’s conversation in the kitchen, the scene with the earrings, and Stephanie’s constant enthusiasm hold true and consistent throughout Batgirls #2, and as a reader, gives the sense that the writers are being intentional with how they’re portraying each character.

The plot is slowly developing, and it’s become apparent that the heroes are facing more than just one villain. Seer is using the Saints as a way to kill the Batgirls, the ‘Hill Killer’ is still on the loose, and the people of Gotham are being controlled and pushed to revolt against any form of rule or government. While on the whole there hasn’t been much more progression on this front, there’s a good chance things will start picking up as it’s no longer just common civilians entrapped under some mind manipulation, but one of the Batgirls as well.

It’s looking like Cass will have her hands full with dealing with Stephanie as each Batgirl works to figure out what exactly is going on in their neighborhood. The story, while only two issues in, is definitely delivering for me, and I hope it continues to do so as the story unfolds.