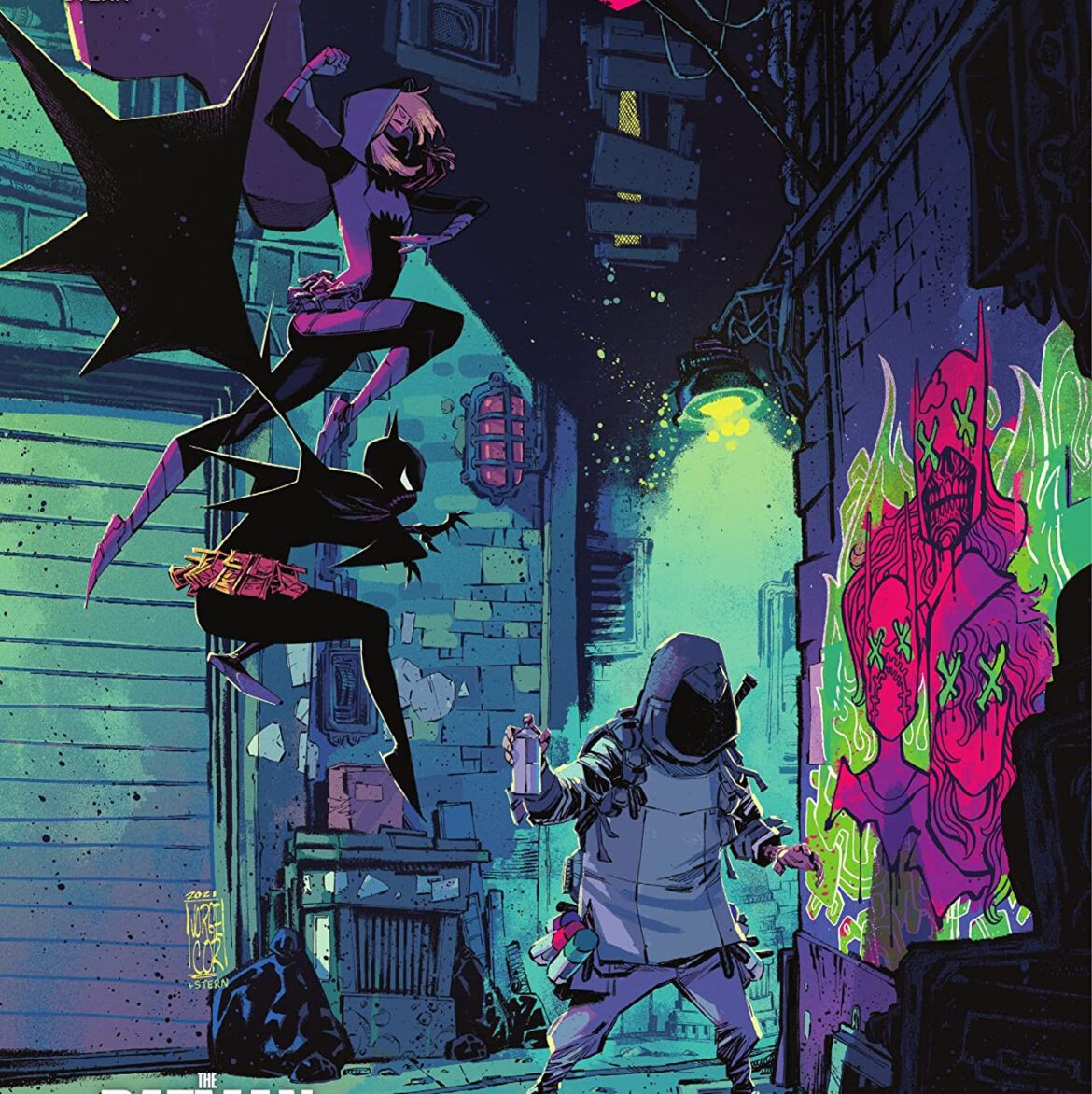 Overview: In Batgirls #3, the Batgirls find themselves going up against the Tutor all the while Seer and the Hill Killer remain on the loose.

Synopsis (spoilers ahead): Batgirls #3 begins in Gotham City, as the masked man, known as the Tutor to the crowd gathered around him, calls to his listener to rise up and embrace fear.

Out of sight, Cassandra manages to shake Stephanie out of her stupor. The girls then realize that the Tutor is using some sort of fear gas mixed with a toxin that allows him to manipulate and control those near him.

Barabra, acting as Oracle, asks the Batgirls for their status, which they relay over. They rigged the signal output amplification device but can’t do much more because of the Tutor. Their plan is to rush him, and they’ll check back in with Oracle later. Unfortunately, the Tutor’s toxic gas is ultimately too strong, and the two girls make a hasty retreat back to their home base.

Once at their current HQ/crash pad, Barbara debriefs with the girls. Somehow, the Tutor’s art must be a trigger for those infected with his fear gas; it’s looking like the Batgirls stumbled upon something big, so now their next step is to gather more information. What’s this guy’s name, his background, his goal, and more importantly, where did he get his hands on fear gas?

Hopefully, they’ll be able to glean some answers at the art show coming up over the weekend. First, Barbara tasks Stephanie with establishing a perimeter and mapping out multiple exit strategies. Next, Cassandra will set up a microgrid, to give Barbara access to every online device in the area. With that, Barbara will be able to hack, see, and track the location of everyone in attendance.

The night of the art show arrives quickly, and the girls put their plan into motion. While Stephanie and Cass observe from afar, Barbara attends the show, taking place on a ship docked at the harbor, as her civilian identity. It’s there that she runs into Charles Dante, an old college classmate.

The two enter the space of the art show together and find themselves standing before a massive sculpture built by stolen goods from around the neighborhood. The attendees are enraged to recognize their own belongings in the structure and swarm forward to take their missing items back.

Suddenly, all the phones in the vicinity come to life, and the hooded face of the Tutor appears, claiming that he will be their teacher when considering the price of convenience. Making a hasty retreat from her old college classmate, Barbara informs the Batgirls that the Tutor is on the boat, and it’s time for them to move in.

Stephanie and Cassandra crash the party and confront the Tutor. The masked man utilizes his toxic gas and manages to enthrall Stephanie under his control once again. Enraged, Cassandra deals a finishing blow that forces the Tutor to leave lest he is totally defeated.

Directing Cassandra to not pursue, Barbara tells the girls to meet her back at their flat; they both did really well.

Observing the Tutor’s escape from afar, the Saints, servants of the Magistrate, descend and head over to scan the docks, searching for the now long-gone Batgirls.

Back at their flat, Barbara tries to console a despondent Stephanie that she isn’t at fault for being susceptible to Tutor’s hypnosis. She counts the events of the evening a win, as Cassandra was able to affix a nano transmitter to him, so now they’ll know his every move. Disheartened, Stephanie thanks them for trying to cheer her up and decides to head to bed for the night.

Barbara follows suit, and as she settles down for the evening her phone rings; she’s pleasantly surprised to hear Dick Grayson’s voice on the other end. Her contentment transforms to shock and then anger as the voice of Seer comes through the line. Clearly, her opponent was using a voice modulator, which Barbara is not impressed by. Seer laughs manically and tells Barbara to turn on her computer to see a hot pic. Aghast, Barbara rushes over to her monitors and stares in horror at the picture of Nightwing, bound and bloody being displayed.

Barbara exclaims that Seer is a liar, and she knows that none of it is real, but Seer simply continues to laughs.

Analysis: The Hill is keeping all three Batgirls busy as they try to determine Tutor’s motivations, who the Hill Killer is, and how to defeat Seer. Now two issues past the first issue in the series written by Becky Cloonan and Michael W. Conrad, with art and colors by Jorge Corona and Sarah Stern, the overall tone of the story, along with the animated character expressions and gestures, comes across as one that caters well to a young audience. While this point is by no means a negative one, it was a helpful shift in perspective for me to make and put Batgirls #3 and its somewhat cartoon-feel in context.

The issue picks up where the previous left off, and Cassandra manages to help Stephanie break free of the Tutor’s mind control. I get the sense that her susceptibility to the hypnosis will come into play more in later issues, I’m a little surprised that a once protégé of Batman is so easy to manipulate. The girls are impulsive, which broadly is accurate of their characters, yet their plan to simply jump into the fight without planning ahead came across as a bit naïve.

Later on, Barbara consoles Stephanie to not feel bad about falling under the Tutor’s spell; she herself has made zero progress figuring out who Seer is. At the end of Batgirls #3, Seer has managed to once again hack her system. While Barbara Gordon isn’t titled the World’s Greatest Detective, she has in the past proven herself to be highly intelligent and extremely talented when it comes to technology. While I by no means expect her to be able to solve this case without trying, I’m hoping we’ll be able to see her make some progress soon, as would be realistic of her character.

On the whole, I love the camaraderie between all three of the Batgirls and their interactions with each other, and the minor details included in the story, such as Barbara’s love of coffee, Cassandra’s unicorn onesie, and the employment of emoji’s to illustrate a character’s emotions. In addition, I am a big fan of the way in which Cassandra, in particular, is drawn, and how extremely expressive she is. Those two components continue to make this series quite enjoyable for me. Lastly, at this point in the series, I would say it is a fun and exciting read for younger audiences primarily but still amusing for more mature readers.