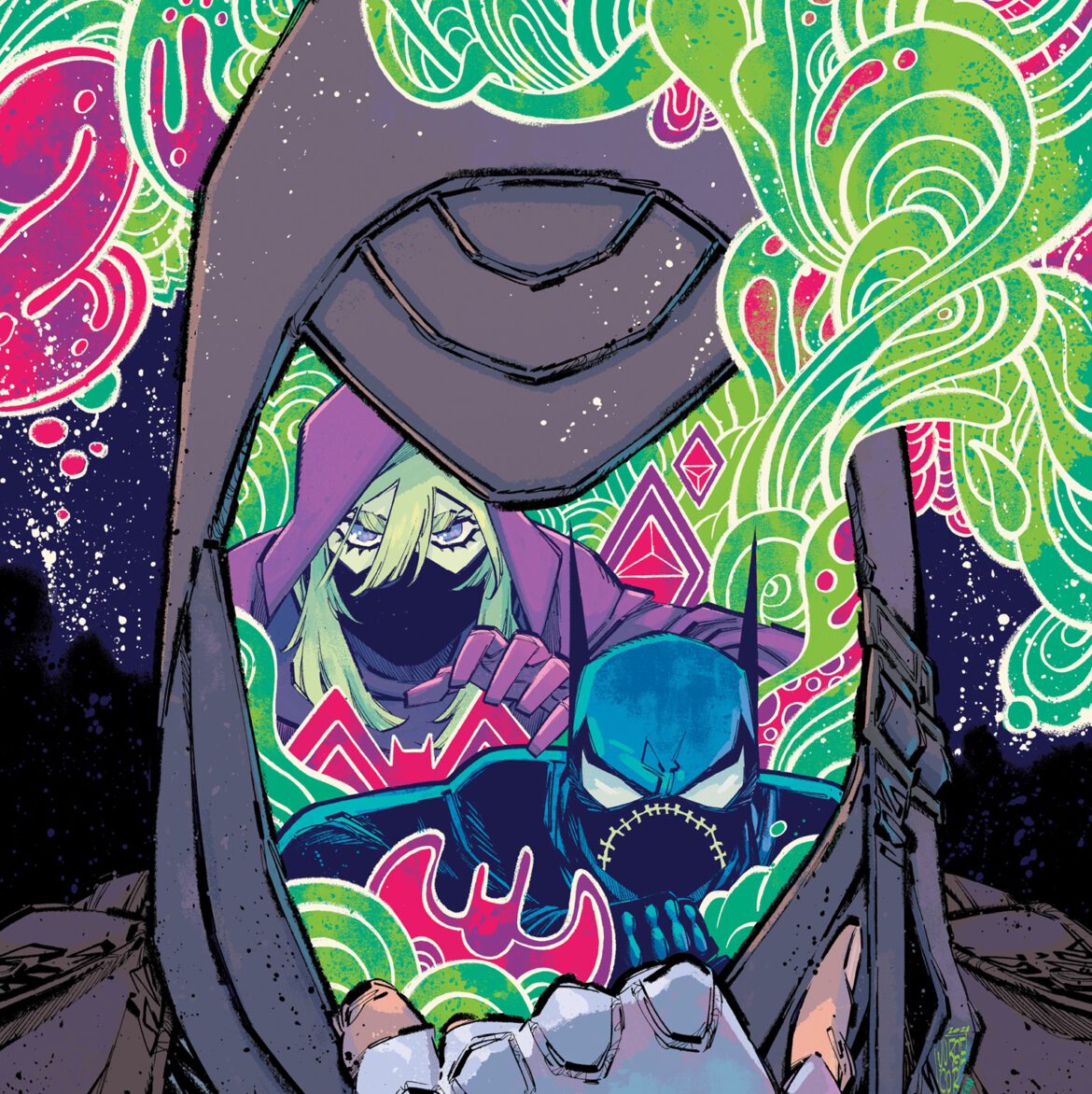 Overview: In Batgirls #4, the Batgirls come face to face with the Hill Ripper while yet another nefarious player is revealed.

Synopsis (Spoilers Ahead): Batgirls #4 begins at the loft, as the Batgirls come together in the kitchen for their morning meeting; the first order of business is making coffee for a tired Barbara Gordon, who spent the last six hours rebuilding the firewalls for her network after Seer hacked them the night previous.

Clearly, their caseloads are too heavy for them to be effective against several threats at once, so Barbara proposes that tonight they bring it to the Tutor. She’s making a plan, one that includes filters in their masks to avoid dealing with his toxic gas, but in the meantime, the girls should take the day off; they’ve earned it.

Stephanie and Cassandra decide to spend their time joyriding around in the Bondo, the car stolen from a group of thugs a bit ago. Their drive takes them to a bookstore, owned by Mr. D., one of their neighbors the girls had helped recover a stolen item previously.

The girls decide to drop by and pay a visit; as they chat with Mr. D and browse his collection, the door opens once again, and in walks their suspicious neighbor, known as Mr. Greene. He’s the same man the girls suspect of being the Hill Ripper.

Mr. D wheels over a large stack of books, saying he was surprised to be able to find the entire collection. Mr. Greene tells him to just pack the books up, he doesn’t have all day. Even more suspicious now, Steph and Cassandra hurry out of the shop (after picking up a book Mr. D had recommended), eager to tail Mr. Greene and find out what he’s up to.

Deciding that the subtle approach isn’t getting them anywhere, Stephanie comes out of hiding (in the bushes) with the intention of just going up to Mr. Greene and asking him if he’s the Hill Killer. Jumping up, she bumps into a man who turns out to be Charles Dante, Barbara’s old classmate that they had encountered at the art show.

Surprisingly, he recognizes Stephanie first as Barbara’s friend, and before continuing on his way, tells the girls to tell Barbara to give him a call. With a wave of his hand, he disappears further down the street.

Stephanie and Cassandra are left with a bad vibe; there’s no way he saw the girls at the art show as they were out acting as Batgirls. Unfortunately, his expressions are too guarded that Cassandra can’t get a good read on him. Making a mental note of it, the girls continue on their day.

Reports throughout the Hill come through on the evening news; still unidentified, the Hill Ripper continues to simultaneously stalk the streets and baffle homicide detectives. The force’s fumbling has enticed independent web sleuths to take up the case.

Batgirls #4 continues on the rooftops, as Cassandra and Stephanie head out at night as Batgirls, putting Barbara’s plan into motion. The beacon Cass planted on the Tutor during the art show is active, with the location pinged on the girls’ GPS. The Batgirls take off, flying through the city’s rooftops while, unbeknownst to them, the Saints track their every movement. Their orders are to maintain a distance but to not lose them. With that, the Saints begin tracking the assets.

Arriving at their destination, the Batgirls crash through the rotting building, discovering it to be empty. As the Batgirls sweep the room, they discover a trapdoor leading down a set of stairs, where they come face to face (well, mostly, as he is missing a nose and lips) with the Tutor. Of course, he had noticed the tracking device and had intentionally led the girls to his hideout.

Never one to back down from a challenge, the girls bring the fight back up to the main floor, where many hypnotized people (having appeared at some point while they were down below) begin attacking them.

Unfortunately, they’re not the only ones affected by the Tutor’s mind control powers. Succumbing once again, Spoiler starts trying to attack Cassandra, who manages to duck and weave long enough to strategically place herself next to the Tutor, leading Spoiler’s next punch to land directly in the Tutor’s face.

Thankfully, Cassandra manages to break Spoiler out of her spell, and with that the girls bag and tag the Tutor, containing him in the Bondo. They’re instructed by Barbara to deliver him at Charles Dante’s home office, as he’s a respected psychotherapist with a pedigree of helping some of the toughest patients at Arkham.

Arriving at the scene after their girls have departed, the Saints regroup and hold the position until their next order is delivered.

Making it to Charles Dante’s home office (more like a mansion) the girls drop the Tutor off with Dante, who promises to follow up with their ‘mutual friend,’ indicating Barbara, tomorrow.

As the girls drive off in the Bondo, Dante turns to his project. Bound in a chair, The Tutor pleas for mercy, although none will be given. Gripping him by the face, the psychotherapist shouts that he is no longer Charles Dante; he is…Spellbinder.

Analysis: Batgirls #4, written by Becky Cloonan and Michael W Conrad, with Jorge Corona on as the artist, swings the plot forward as the face (although for reasons not quite explained he doesn’t have much of one) behind the Tutor is revealed, along with the mastermind pulling his strings.

Charles Dante, a renowned psychotherapist with accolades of success stories from Arkham Asylum is most definitely not who he presented himself to be the first time we met him in this series. What he intends to do and why remains to be seen, although he does keep with the prominent trend that most Arkham Asylum employees have problems themselves.

The overall look and feel of the story remain the same; cartoon-like expressions and angles with a feel-good, goofy vibe. It somewhat reminds me of the 90’s Young Justice run due to its eccentric color palette, character dynamics, and the breaking down of the fourth wall in narrative speech bubbles. Not necessarily a bad thing, but it further cements the opinion that this series would be a great gateway comic book for younger fans or readers simply interested in a light-hearted series.

The dynamic between the two active Batgirls in Batgirls #4 is great, although Barbara comes across the most out of character, in my opinion, at this point due to her lack of decisive planning. I do, however, love her cheer and how it’s made abundantly clear that she genuinely cares for both Stephanie and Cassandra.

The Hill Ripper remains at large, Charles Dante, touting himself as Spellbinder is up to something nefarious, and the Saints are still on the hunt trying to track the Batgirls down while Seer continues to stay one step ahead of the Batgirls. It’s clear the girls have their work cut out for them, and how they respond to the changes on the chessboard remains to be seen.

All in all, Batgirls remains a fun, if somewhat goofy, series, perhaps not strictly intended for young readers or fans looking for a feel-good read, but it would be greatly enjoyed by them. I am enjoying it, although I will admit that it isn’t satisfying as much as I was hoping. Regardless, I’ll keep reading along to find out how it all ends.