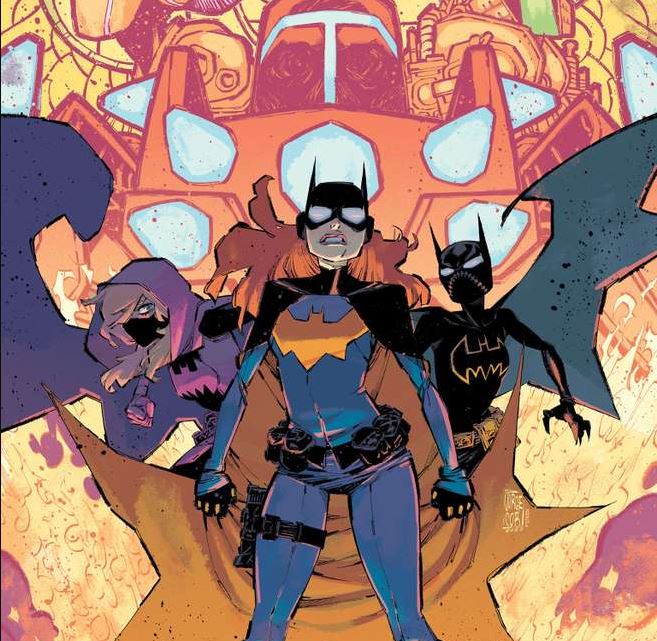 Overview: In Batgirls #7, the hunter becomes the hunted as Seer finds herself captured by the Saints, with her only hope of rescue coming from none other than…Batgirls.

Synopsis (spoilers ahead): Batgirls #7 begins on building rooftops in the Hill, as Seer desperately tries to run, pursued by the Saints. Tarsus, Assis, and Valentine, once pawns in Seer’s hands, are now fully aware of her manipulation and are none-too-pleased with her machinations.

After arriving at central booking, the ex-Magistrate splinter cell vanishes, having successfully killed the three officers in charge of their imprisonment, and are now pursuing their one goal: to make Seer pay.

Across the city rooftops, Cassandra Cain and Stephanie Brown, resident Batgirls, observe Seer’s desperate flight and move to intervene once it becomes clear that she has nowhere left to run.

Previously, Seer framed Cassandra for a murder that she didn’t commit, causing the destruction of the Clock Tower in the process and compromising Oracle’s network. Needless to say, neither party is a very big fan of Seer.

The Batgirls confront the Saints, who have Seer held at gunpoint. They propose a compromise; the Batgirls let them leave, on the condition that they are able to take Seer as their captive. After all, the heroines will never have to deal with Seer again.

The proposal sounds good to Stephanie, who calls their standoff off, and she and Cass leave. Seer desperately cries for the Batgirls to help her, but Steph simply states that Seer should have gone to Batman if she wanted them to abide by some moral code. With that, they depart.

On their concealed communications network, Barbara commends Steph for her ability to stall and shares that she managed to get a trace on Seer’s distress signal. Now it’s time for them to fall back and let the Saints believe they’ve won.

Thanks to Barbara’s tracker, the Batgirls are able to follow the Saints and their captive to one infamous location; the Iceberg Lounge. It’s swanky, pricy, and deadly, although, in Stephanie’s opinion, they have amazing cocktails, and entertaining stage acts, and it can’t be argued that they do have two Michelin stars.

Even on a Tuesday night, the location is teeming with villains as cold as its name implies, and although they’d like to just burst in through the front doors, the Batgirls know a more subtle approach is required.

Inside the Iceberg Lounge and deep down under it, the Saints follow Seer through an old bootleg passageway under Gotham, known to Seer due to her childhood at the Lounge. The passageways are largely unknown to anyone else and end in a cellar filled with Seer’s computers and equipment.

Despite their initial idea to destroy all her equipment, the Saints decide against it; after all, some of it might prove to be useful and could possibly help them find their dog, F1DO, who was previously reprogrammed and adopted by Barbara.

Sitting captive in her hideout, Seer reminisces about her childhood. Her real name is Kira, and after her mother left when she was little, she stopped going to school and her father started bringing her to work, as he had important things to do at the Iceberg Lounge. Kira was always a bit obscure and easy to forget. After her father left and didn’t return, most people assumed she had disappeared just like her parents, and so that’s what she did. Small, quiet Kira faded away, and Seer was born.

The Saints then decide what to do with Seer. Using her technological skills, she’ll broadcast to the public the lie that she herself had led the Saints to believe– that Simon Saint never died and that the Saints are his lieutenants. After all, it was Seer who showed them that lies are more powerful than the truth, and fake news in the right hands is the most powerful weapon.

Back at the Iceberg Lounge, Stephanie and Cassandra remain as sentinels, providing Barbara backup as Batgirls. Barbara herself decides to use the front entrance, just like everyone else, and arrives dressed to the nines, awaiting the backup she called, excluding her other two Batgirls.

It seems everyone is there, including Grace O’Halloran, reporting live from the Iceberg Lounge Red Carpet, there to cover the premiere performance of the world-renowned Lulo Laroux, an acclaimed sword-swallowing act of danger and beauty.

By the entrance of the Lounge, Barbara awaits her escort, and backup and is finally met by both in the form of Dick Grayson, also her boyfriend. The two are dressed to impress and make their way to the entrance of the Iceberg Lounge and the jaws of their enemy.

Analysis: Batgirls #7 brings the characters and readers away from just the Hill and into an infamous business, the Iceberg Lounge. Thanks to the Batgirls, the Saints have discovered Seer’s lies, which have come to bite her in the back as she now finds herself in their grasp, and bereft of any support outside of the Batgirls, women she’s been hunting and hurting previously.

Seer’s past is finally revealed to a degree, and although we still don’t know the full reason why she chose to do what she did towards the Batgirls, her character in this issue felt rather lacking. Perhaps more of her history will help remediate this, but her demeanor and character in this issue were a bit underwhelming after her previous appearances. To be honest, I’m inclined to say that the Saints had more character than she did.

One thing Batgirls #7 had that greatly impacted my enjoyment of the series was the art. Robbi Rodriguez was the artist for this issue and did a fabulous job. While the art in the previous issues was still in every way fun and engaging, the styles are distinctly different and my preference does fall into Rodriguez’s camp.

Lastly, I loved that Dick Grayson entered the scene, and Barbara and he are going undercover in the next issue. No doubt things won’t go as planned, and I’m sure that however it unfolds will be more than entertaining between the two of them, not to mention the other two Batgirls waiting in the wings.

The Saints, Seer, and the Batgirls (plus Nightwing) are all convening at the Iceberg Lounge, and there’s no telling what might happen next. There’s no trust lost between Seer and the Batgirls, so we’ll just have to see how they’ll manage to work together as the story progresses.