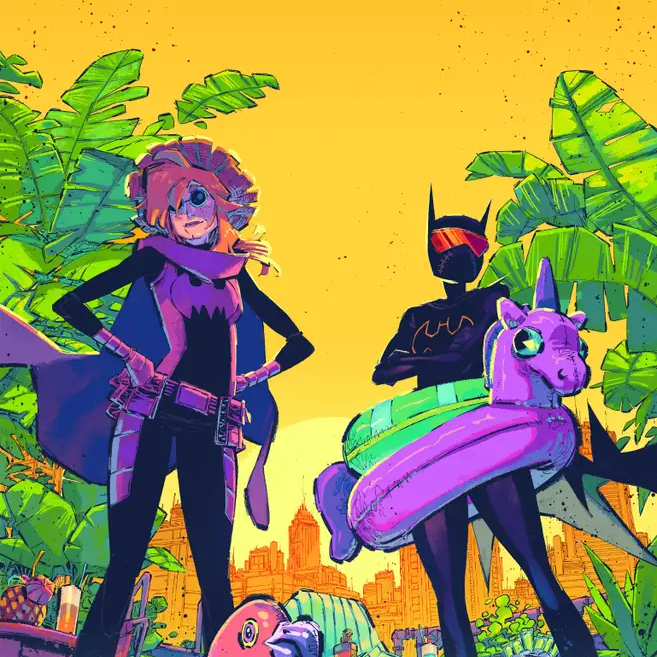 Overview: In Batgirls #9, summer is in full swing and the Batgirls are determined to enjoy theirs. Unfortunately, life has other plans as the murders in the Hill continue, and the Batgirls stumble across hidden clues to a much larger plot.

Synopsis (spoilers ahead): Batgirls #9 begins in the Hill, Gotham City, as Grace O’Halloran, a previous reporter for Gotham City 5 news, brings the evening air on her new podcast, Times of Grace, providing her listeners with unfiltered updates. Her decision to begin this new venture was brought about by the Batgirls; they saved the residents of the Hill from the Saints, exposed the inefficiency of the GCPD– although Commissioner Renee Montoya has promised real change–and took care of Tutor and Spellbinder. Even the clock tower is in the work to be restored, and it’s truly starting to feel like the dawning of a new era.

They’re not out of the woods yet, however, as there is still a killer lurking around the Hill, who has yet to be caught.

Elsewhere, Barbara Gordon concludes a rendezvous with her close friend Alysia, and heads over to a physical therapy appointment, checking in on Cass and Stephanie along the way. Both girls have found things to do to amuse themselves and spend their time; Cassandra picking up some new literature at the bookstore, and Stephanie cooling down by an inflatable pool.

Said pool just so happens to be on the rooftop, with perfect line of sight to Stephanie’s prime suspect for the Hill murders, Mr. Greene. To the others, Stephanie’s hard work comes across as a little obsessive, however, Stephanie assures them it’s all for the right reason.

As the hours pass and day turns to night, the Batigirls go out to hunt. They’ve set a trap for a villain all of them have a personal grudge against, which, thanks to their expert martial art skills and quick thinking, goes flawlessly.

They end up with a captured KGBeast, the man who gave Dick Grayson amnesia for a year, and by the end, they have more than successfully completed their task. As Cassandra ties KGBeast up, Stepanie makes her way over but not before an indiscernible shape flies past her suddenly, too quick for her to make out what it was.

The mysterious shadow flew fast enough to knock Stephanie from the roof, landing her in a dumpster inside the alley Cassandra is crouching by, securing KGBeast.

The girls are surprised to see that trash within the dumpster just so happens to belong to Mr. Greene– information they’re clued into when discovering some of his mail displaced by Stephane’s fall. They’re further even more surprised to find mannequin limbs inside the trash, wooden arms and legs piled high. The surprise doesn’t end there, however, as both girls are shocked to find Mr. Greene’s body in the trash, his corps bloodied and soiled.

Upon more closely observing the body, Cassandra realizes that one of Mr. Greene’s eyes is fake, which Stephanie quickly removes, along with some additional samples of substances on Greene’s body, in order to collect evidence to look into later. The GCPD is on their way, only minutes away, and the girls quickly take what they need and leave.

Once back at their current home, Barbara finds a desolate Stephanie, who realizes too late her assumptions had been wrong about Mr. Greene. An innocent man died, one whom Stephanie was convinced was the murderer.

Taking the younger girl by the arm, Barbara comforts her and promises that the ice cream she has in the fridge will help deal with everything. Inside the kitchen, the girls pull out the eyeball taken from Mr. Greene’s body, and noticing a seam along it, open it up. They discover a note inside, containing a series of numbers and letters, revealing a cipher.

As the girls stare at their new discovery, another, unseen person regards them from through their kitchen window. Killer Moth is undetected, and after observing a few more moments, flies away.

Analysis: Batgirls #9 is brought to life by writers Becky Cloonan and Michael W. Conrad, illustrated by Neil Google and Rico Renzi. Life for the Batgirls is looking up; no more cult leaders, ex-friends with mal-intent, or mercenaries hunting after them. The break from all the action is a nice change of pace and provides the opportunity to showcase what else fills the lives of the superheroes of the Hill. The momentary peace is broken, however, by the revelation that Stephanie’s prime suspect as the Hill Killer murderer is found dead in his own trash in a back alley, with a fake eye containing a secret cipher.

Clearly, there is a new mystery afoot, and as it is later revealed at the end of the chapter here in Batgirls #9, the Batgirls aren’t as alone in their hunt as they assume themselves to be. Killer Month is alight on their tracks, unbeknownst to any of the heroes.

Highlighting itself from within all the mysteries and developing plot, Batgirls continues to be a series centered on the friendship between Barbara, Stephanie, and Cassandra and their growing trust and support for each other. It’s a feel-good story that fits well for young readers, leaning into some goofy moments and a more cartoon art style while still continuing to be marketing to a mature audience.

This issue provides a stepping stone into the plot that’s been brewing since the very first issue, and already it’s showcasing itself to be a bigger puzzle than the Batgirl's first presumed. Mr. Greene, although a grouchy and unpleasant-looking man, was a victim in an ever-growing series of deaths, and just goes to show that assumptions can be ever misleading. Despite their hardships, each young woman continues to tackle their challenges head-on and support the other. Chances are good that the next issue will continue to demonstrate those good qualities and reveal other hidden secrets about the Hill!