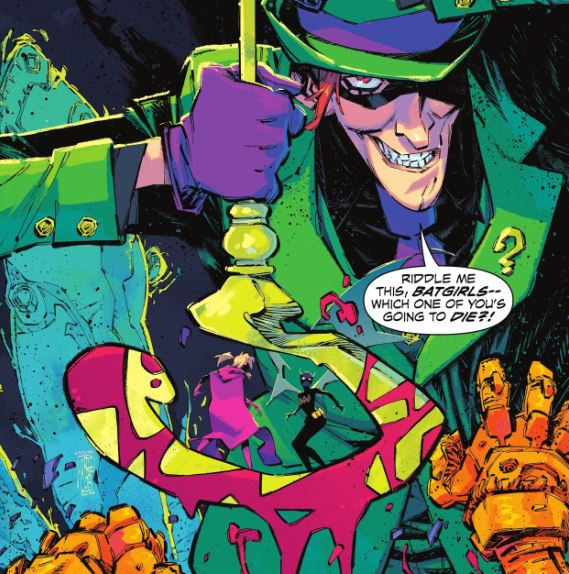 Overview: In Batgirls #12, it is the Hill Ripper versus the Batgirls…and the Riddler as our heroines zero in on the dastardly villains that have haunted them from issue one!

Synopsis (spoilers ahead): Batgirls #12 begins at Mr. Fun’s apartment, as Steph and Cass face off against the Riddler wielding his deadly sword cane. Killer Moth regains consciousness and punches his former partner, and Cass takes him with his Moth-Jet-Pack to save him (badly injured by Riddler in the last issue) and Grace, Mr. Fun’s (the Hill Ripper) next target, while Steph holds down the fight with the Riddler. Riddler tells Steph that her father is alive, and the whole game with the clues was him seeking a partner, which disgusts Steph that he’d let people die for puzzles.

Cass calls Oracle for backup, and Babs wakes up her new contact on the GCPD, Calvin.

At Grace’s studio, she downs a cocktail before heading out, but Mr. Fun attacks, slashing her eye, accusing her of being another failure, an alcoholic parasite, which shakes Grace, and she tries to bargain with him to stall for time. Calvin arrives, holding his pistol on the murderer as he uses Grace as a human shield.

Riddler stabs Steph in the shoulder while she solves his riddles between punches. Robot dog Fido helps Steph out, and she throws herself at Riddler, through the window into the river, but she has to abandon her fight with Riddler to save Fido.

Cass battles fiercely with Mr. Fun, struggling at first with his emotionless savagery before overcoming him and allowing Calvin to arrest him.

The next day, Commissioner Montoya praises Calvin and the Batgirls in a press conference. Grace and her cameraman plan their next podcast – and Grace refrains from the day drinking! Babs and Alysia fix Fido at the Loft, and Dick drops by to congratulate them. Babs praises her Batgirls, while on the roof above, Cass encourages Steph, who is beating herself up for letting Riddler get away and is unsettled about the news that her father is alive (again). Cass promises she’ll never let anything happen to Steph as the pigeons fly into the sunset around them.

However, we flash back to days ago, as Mad Hatter plots to reunite Steph and Cluemaster as he commits a murder…

Analysis: We’ve come to the end of our third full arc in Batgirls (not counting the three-issue backup story in Batman: Fear State), and it seems that Cloonan and Conrad have found their stride on the book. Though the narration boxes continue, they’re a lot more restrained, a lot more sincere and straightforward rather than overly jokey and quirky, letting us feel the danger and emotion of the Batgirls instead of clashing with the situations they’re describing. It’s also quite nice seeing all of the character moments they put in for Steph, showing her brain working a mile a minute as her body fights the Riddler, Cass, reaching into her traumatic past to fight the vicious Mr. Fun, and even Grace O’Halloran, finding some strength to fight some of her demons as a result of her brush with the evil Hill Ripper.

The plotting in Batgirls #12 is perhaps still a bit sketchy, with Riddler leaving clues for the heroines for his own sick game while they impressed him with both their intelligence and inventiveness. It’s quite nice seeing Steph hold her own against the vile villain after his nasty threats to slaughter her to hurt Batman in Tom King’s One Bad Day: Riddler.

The setup for the next three-issue arc (the Annual at the end of this month plus issues #13-14, illustrated by Jonathan Case) at the end is quite fun, showing the Mad Hatter as a new major threat to our dashing daredolls. While it’s quite puzzling that Steph thinks Cluemaster is dead once again after seeing her confront him in Young Justice #18, comics continuity is always full of these little cul-de-sacs of confusion.

Neil Googe, back on full art duty after the triple inker last issue, is much more consistent by himself, though the look of this issue is a lot sketchier and more textured than his first two issues – not at all a bad thing, as it gives the fights a grittier feeling, while still taking advantage of Googe’s cartoony faces and enthusiastic expressions. Though not quite the full zany zest that Corona provided in the first six issues, Googe definitely provided great energy and emotion in his four issues, and Batgirls is lucky to have had him come to visit Steph, Cass, and Babs. Though colorist Rico Renzi still paints Steph and Cass’s faces too purple/pink sometimes, the sense of neon-lit adventure continues to lift the book up along with Googe’s excellent lines.

Jorge Corona produces our main cover for Batgirls #12, featuring a huge Riddler holding a tiny Steph and Cass in his blood-smeared cane, a vivid and energetic composition, as per Corona’s usual, though slightly marred by the fairly dull flavor text from the perfidious puzzler. Fascinatingly, the original cover released with solicitations featured the Mad Hatter, indicating along with the solicitations that some fairly significant changes instituted by editorial to this arc occurred (possibly indicating a reason why the art for the last issue was so uneven). Given the tease at the end of this issue, it’s quite possible that the strange cover solicited for next month’s #13 will be replaced by the original #12 cover, but we shall see! Audry Mok’s cardstock variant shows Steph and Cass sharing a pizza on a couch – cute and sweet, if a bit less dynamic. Rian Gonzales’ incentive variant presents Steph and Cass falling down the rainbow road, surrounded by Mad Hatter-themed figures (and the ever-present Bitewing!) – absolutely adorable as usual. But the crown jewel of the covers this time is Paulina Ganucheau’s 90s Rewind variant – which she shared on Twitter is an homage to Steph’s first storyline in Detective Comics #648, drawn by her teacher (RIP) Tom Lyle, Steph’s co-creator!

Becky Cloonan and Michael W. Conrad bring their third arc to a close, handily launching their fourth as well as bringing several strong moments of character development to the cast. Neil Googe finishes his fourth issue with strong, sketchy linework, really highlighting the strengths of each character and their cartoony, action appeal.