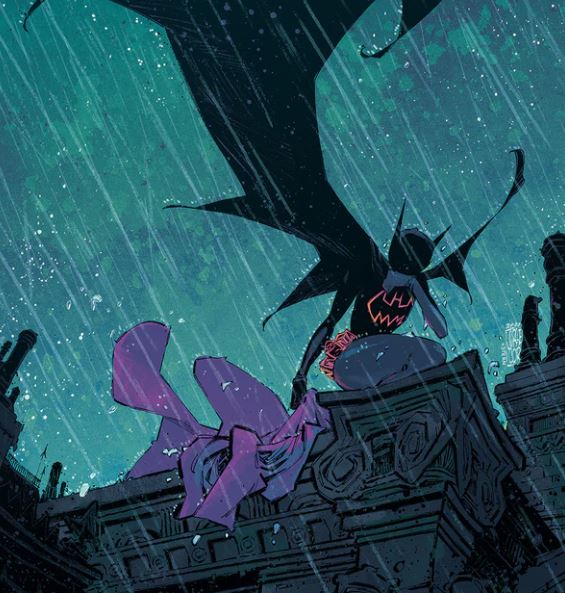 Overview: In Batgirls #14, a silent night falls over Gotham as Cassandra Cain Batgirl detects and fights her way to save her best friend, Stephanie Brown Batgirl.

Synopsis (spoilers ahead): Batgirls #14 begins in the Hill’s GCPD station, as Cass investigates Cluemaster’s desk thanks to their new friend Office Calvin Brooks, discovering that Arthur Brown’s body seemed to walk away on its own. Leaving a picture of Cluemaster with the word “Lazarus” scrawled on it, Cass swings into the rain, seeing ninjas venture out through her binoculars. Stealing one of their suits and bikes, she finds their base, steals some lab samples, then fights her way across a massive suspension bridge above the base. An overwhelming number of ninjas attack, but Lady Shiva and her deadly sword thin their numbers.

Shiva waves to Cass’s displeasure, and she bikes off to the Loft, where she pours over maps, Riddler’s final riddle, and Steph’s letter to her. After reading Steph’s heartfelt words about her history and fears, her childhood with her supervillain dad, Cass prepares for battle, having noticed Steph’s mention of Stonefence Cabins as where her dad used to take her as a child. Zooming through the woods on her stolen ninja motorbike, Cass finds the cabin with Steph knocked out, tied to a chair, and with many electrodes plugged into her.

Analysis: Becky Cloonan, Michael W. Conrad, and Jonathan Case have poured their hearts and souls into Batgirls #14. Though I’ve been a fan since issue one (and before, with the three backup stories in Batman during Fear State), I think this issue will become the Batgirls title stand out, similar to Batman and Robin Eternal #13, Batman Eternal #24, Detective Comics #980, Batgirl (2000) #28, and Batgirl (2009) #14. While it’s part of the larger arc starting when Steph and Cass switched bodies and were kidnapped by their supervillain parents, this story has a beginning, middle, and end that work as its standalone narrative and as part of that larger arc. Advertised as having no dialogue, this is technically true – no words are spoken by any characters, gestures instead carrying greater meaning, drawn brilliantly by Jonathan Case, who handles pencils, inks, and colors all together this issue. There’s a bit of cheating there, though, as Cass does a bit of writing, and there’s a lot of written material for the reader to peruse while going through the story, particularly the letter that Steph wrote to Cass as part of their conversation in the annual that kicked off this arc. Cloonan and Conrad have crafted that letter very well, making this as much Steph’s issue as Cass’, even though she only appears once. Her heart, her history (nicely imagined), and her relationships with her dad, Cass, Babs, and Batman appear in sharp relief in just a few well-chosen lines.

It may seem like I’m making grandiose claims for this issue, but I think that not only the powerful writing by Cloonan and Conrad but the stellar artwork by Jonathan Case lift it as Marcio Takara, Pere Perez, Damion Scott, and other iconic artists lifted similar high points in the Batgirls’ histories.

Cass displays so much intelligence, emotion, and determination in every panel, and every page drips with atmosphere. From the rain sheeting down during the brilliant ninja fight (which surely hints at a few storylines to come, given the samples Cass stole while in disguise) to the dark woods lit only by Cass’s headlamp, Case evokes powerful emotions, action, excitement, worry, fear, and above all, love – love for these two heroines, love for their quest, love for their city. It’s a shame that Case is only drawing two issues, though given how much work he does on not just the art but the colors as well, there’s clearly a time limit on how much can be done on the demanding schedule of monthly comics – but Neil Googe is promised back next issue to wrap up this arc, though it may take a few more than one issue to defeat all of the villains stacked up against our Batgirls!

All three covers for this month are brilliant, from Jorge Corona’s mournful depiction of Cass weeping in the rain over Steph’s empty cape to Dan Hipp’s incentive variant featuring Steph and Cass munching on some burgers and fries, rich in cartoony details like Steph’s Robin figuring on a belt charm. But it’s Artgerm’s cardstock variant that takes the clear prize, featuring Steph and Cass, back to back, in his beautiful digital painted style, sure to be a massive hit with anyone who loves Artgerm’s depictions of Cass and especially Steph since 2010.

Cloonan, Conrad, and Case - the three “Cs” of Batgirls - have crafted a truly excellent issue of Batgirls that should stand out in the history of Stephanie Brown and Cassandra Cain.