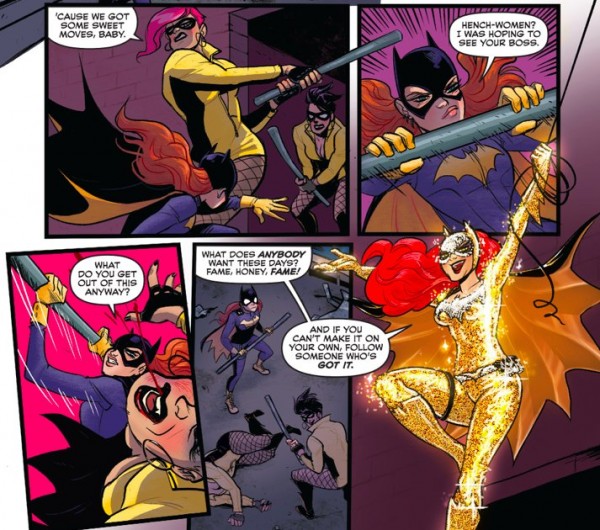 For the last several years as Gail Simone was the writer of the ongoing title Batgirl, the comic featured a transgender character, Alysia Yeoh, as Batgirl/Barbara Gordon’s flatmate, with her backstory emerging over time. It was a considered, underhyped portrayal of a transgender individual as a very normal person in Batgirl’s life.  In Batgirl #37, Barbara discovers that an impostor Batgirl who has been dressing in a bright gold, bedazzled, and shiny costume was the (male) artist Dagger Type, presented as a flamboyant type, dressing up and disguising himself as Batgirl, in a drag queen style.  Many in the blogosphere lashed out against the portrayal of the new transgender character as embracing some of the worst stereotypes about transgender individuals.

Below are some excerpts from such articles:

Murderous or deceptive men disguising themselves as women has been a trope in fiction long before the creation of cinema, and it’s shown up too many times to list or even count. The trope isn’t even subverted here, which is the hell of it.Batgirl has been praised for being a breath of fresh air compared to the rest of DC’s material, both visually and in its writing. It’s been celebrated as feminist and gotten plenty of people interested in comics. The fact that it used a tired transphobic trope in the new creative team’s third issue shows that it isn’t nearly as groundbreaking as many hoped and believed. Its fans are going to miss that or defend the book anyway.

A transphobic comic book was scripted, drawn, colored, lettered, printed, and distributed. Honestly, it’s business as usual, all things considered. Something that’s half joke, half rule of thumb: trans women look for art and media that’s less transphobic than others, not content that isn’t transphobic. You might as well be talking about petting a f*cking unicorn in the latter case.

What makes this even worse is that a few days ago, Batgirl co-writer Cameron Stewart tweeted out “Batgirl 37 is the one we’re all most excited for and also most nervous about.” While he didn’t give any more details, after someone said they’d be fine as long as they didn’t “do an Aaron Sorkin” (referring to the recent rape victim-blaming episode of The Newsroom), he tweeted “damn, internally we refer to this one as the “Newsroom” issue.” So, even though Stewart definitly had a joking tone, it seemed like he had some idea that the issue might offend some readers.

I posted about the issue on Gay League, a popular LGBT comics group on Facebook, to see how others felt. It was fairly split between people who also thought Dagger Type was an unfortunate choice, and people (mostly younger) who thought it was just another freaky bad guy in a fictional universe where people dress up like penguins, cats, plants and playing cards.

After a few days of this backlash, members of the creative team on the title took to Twitter to apologize for the portrayal of trans characters in the issue.

We have heard the complaints about this issue and are listening carefully to the reactions with grave concern.

We could go on all day about our intentions for the issue and the character of Dagger Type, and what our goals were and weren’t. But, our intentions do not invalidate the legitimate reactions that some have had to this story. Those reactions are honest and heartfelt, and exist regardless of our creative intentions, and we don’t wish to dismiss them.

Instead, we want to acknowledge the hurt and offense that we’ve caused, and express our sincerest apologies. We’re all deeply troubled by the reaction to this issue and have made it a point of serious discussion amongst ourselves. While we expected a degree of controversy in regard to the issues of identity and the artistic process that this story was meant to evoke, we do now realize that our presentation of this character was flaw., for any elements whatsoever of the story to have reminded readers of the sordid and misguided tropes that associate both drag and gender expression with duplicity.

We deeply regret upsetting readers who placed their trust in us. But were indebted to those who stand up to speak out about their perspective on stories like this their commentary leads to universally better storytelling, from both ourselves and others, and we hope to live up to that standard in the future.

Batgirl 37.  We made mistakes.  We’re deeply sorry.  We will do better.

While the apologies seem heartfelt, readers will have to wait until future issues to see if the portrayal of the impostor Batgirl changes as several upcoming issues of the title have already been solicited as furthering the impostor storyline.