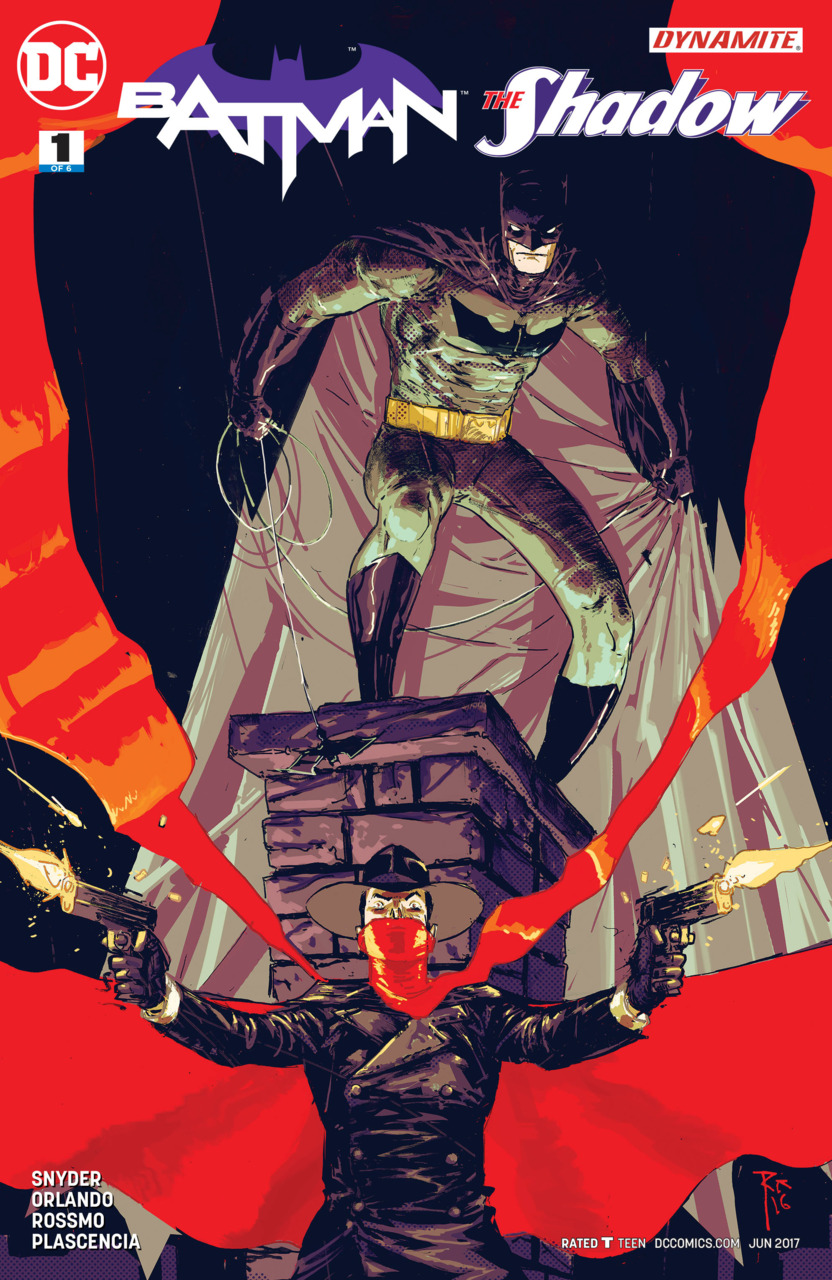 (Spoliers ahead) The issue starts with Bruce Wayne in the French Alps speaking with his old mentor, Henri Ducard. Ducard recalls a story from Batman’s training while holding a Strict Contestor, a wooden training sword. The story then flashes back to Gotham City, where Batman investigates the murder of Lamont Cranston, a seemingly ordinary man who handles the food service at Arkham Asylum. While Batman is examining the crime scene, he is attacked by a dark figure with a dagger and after a rooftop fight, he is revealed to be The Shadow, who then disappears. Batman identifies The Shadow as another man named Lamont Cranston who should have died over 50 years ago and discovers The Shadow to have had controlled a vast crime fighting network. Batman finds the Shadow’s lair and discovers that the Shadow has had many false identities and an arsenal including the Strict Contestor. The story ends back in the Alps with Bruce accusing Ducard of having trained The Shadow, only to have Ducard transform into the Shadow himself.

As far as team-ups go, there are few pairings that seem like more of a no-brainer then having Batman meet The Shadow. Given the pulp origins of The Shadow, it seems entirely fitting to frame the first issue of this story as a mystery for Batman to uncover. Snyder and Orlando wasted no time in moving through the mystery and using Batman’s investigation as a means explain who The Shadow is and introducing his world. I appreciate that the creative team resisted the urge to completely update the Shadow to modern times and leave his history intact by simply explaining that the character who operated in the 30’s is somehow still alive, which works as the basis for the mystery of this series.

Its been well documented that The Shadow was a major influence in the creation of Batman back in the 1930’s. With that in mind, the idea of one of Batman’s most influential teachers, Henri Ducard, either having some sort of tie to The Shadow or even being The Shadow himself is an inspired choice by the writers. It’s actually a shame that cross-company like this are usually out of continuity and seldom carry any long-lasting effects for the characters involved. I love the notion that Batman was trained unknowingly by The Shadow and I’m extremely interested in seeing where this story is going. Team-ups like this often boil down to Hero A and Hero B meeting by chance while tracking down their respective villains and after some understanding and a few pages of them laying down a beating on each other, team up and save the day. That doesn’t seem to be what Orlando and Snyder are going for. The Shadow, as portrayed in this story, is as a far more ruthless crime fighter and the two characters seem more destined for a collision course then some sort of team up, which is far more interesting.

Given that the writer have found an interesting way to connect the two titles characters, I do find the plot thread that The Shadow has some sort of connection to yet another Wayne ancestor to be an idea that has been overdone and is completely unnecessary for this story. It is just a story element that doesn’t capture my imagination in any meaningful way.

The art by Riley Rossmo has an eerie tone that matches the supernatural nature of the story and complements the story well. In particular, the inky blackness that The Shadow materializes from at the end of the issue is well handed. The scenes where Bruce is tracking The Shadow have a 1930’s vibe to them which is a fun addition considering both characters originated from that decade.

This first issue is an engaging mystery featuring two iconic characters and I’m looking forward to the next issue.