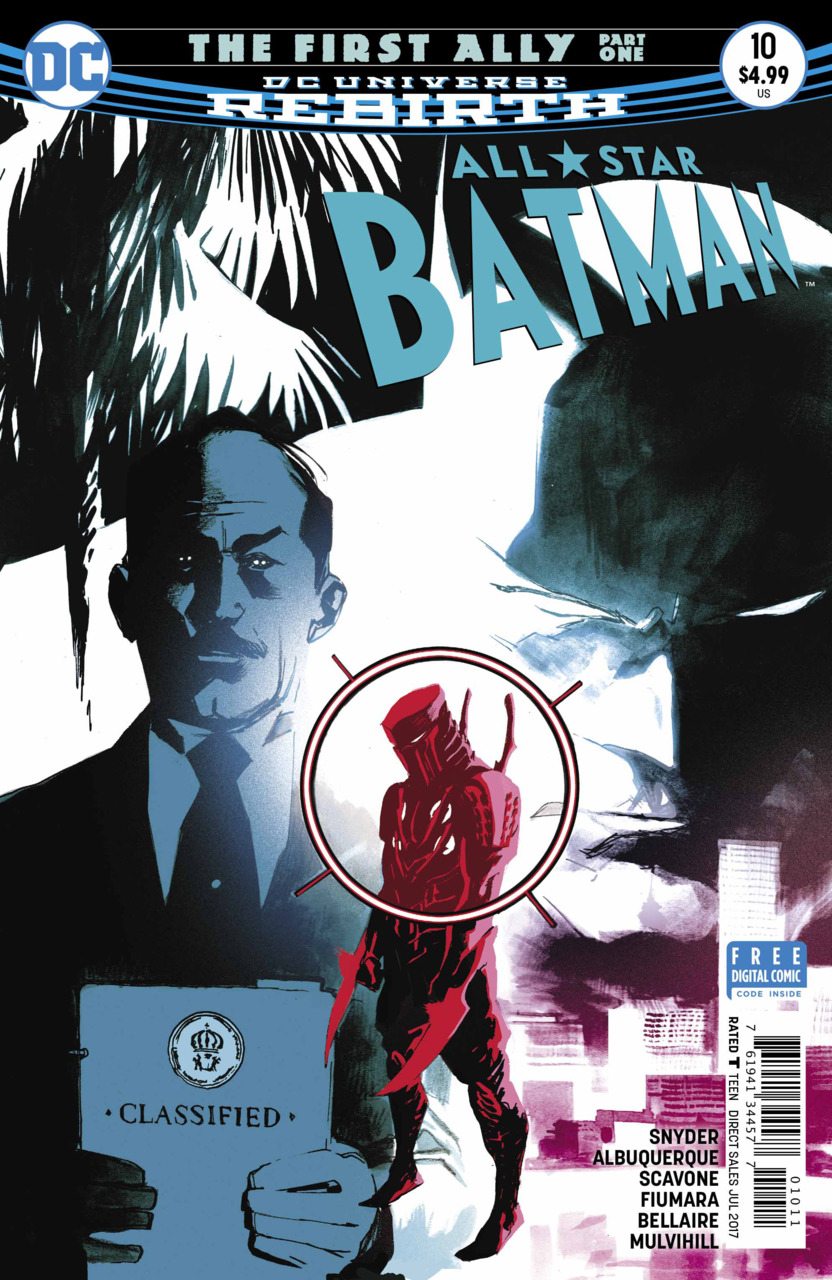 To catch you up: This is the beginning of a now story arc, so it’s new-reader friendly. All you really need to know is this is the Globe-Trotting Batman book.

Synopsis (Spoilers): Years ago, in London, a masked vigilante is causing trouble. The police find him on a rooftop, and give chase. They accuse him of theft, burglary, and defacing property with his mark – a circle with lines, sun-bursting out in every direction. They tell him it’s time for him to go back to Gotham. He runs from them, shows some athletic ability, taunts them… until he realizes that they have him surrounded. An officer tries to talk him into surrendering, telling him that the old butler wants him to return home to Wayne Manor. The vigilante responds by saying that he’s never going back, and dives off the rooftop, onto a moving bus. The young man taunts the officers, flipping them off, when he gets knocked out by a streetlight while he wasn’t paying attention. When he wakes, he’s being escorted away by the officers in handcuffs. They remove his ski mask to reveal that it is actually a young Alfred Pennyworth.

Currently, Alfred is racing through the streets of Miami with Batman in the back seat. They are going after Hush, who is in a helicopter shooting wildly at the Batmobile below. They fly over a baseball stadium, thinking that the Batmobile won’t be able to keep up there, but Batman tells Alfred to drive through the building. Turns out, the Gotham Knights are playing the Miami Marlins, but at this point in the season, both are out of the playoff picture. As the National Anthem is being sung, the stadium gets nervous when a random helicopter is flying above, but erupts into cheers when they see the Batmobile bust through a wall. Alfred ejects Batman out, which launches him high enough to reach the helicopter.

The scene transitions to Hush strapped down to an operating table. Batman threatens to rearrange Tommy’s face, but Hush knows better and calls Bruce’s bluff. However, Bruce is leaving this job to Alfred, who has no qualms about doing such things himself – he would do anything for his son.

Later, on the balcony of this Wayne Hotel, Alfred gazes upon the skyline while Bruce approaches from behind. They talk about what they just did… how they actually didn’t have to do anything, because Tommy believed Alfred was going to do it… and he probably would have, if he was given time. Tommy spilled everything. Told them about a machine called the Genesis Engine. The same scientists who made Anatoli into to KGBeast also developed this prototype engine. However, it was stolen, and is now being sold to the highest bidder here in Miami, just off the coast at Fort Dexter.

There, a descendent of Blackbeard operates a more modern version of piracy, buying and selling amongst other crime families. Thankfully, Tommy Elliot was invited to the bidding of the Engine, impersonating Bruce Wayne. So Bruce takes his place in attendance, clearing through the tight security. Once inside with the other bidders, Thatch appears on a tv screen, and talks to them. He thanks Bruce for attending, and Bruce explains how he brought a gift – Queen Anne’s Revenge, a painting that was done on the broadside of Blackbeard’s ship. However, Thatch and the other bidders caught on to Elliot’s scheme, and accuse Bruce of being him. Thatch sentences him to death for his deceit, and the other bidders open fire on Bruce. However, the painting (being on the broadside of the ship) is reinforced with iron, and Bruce uses it like a shield. A bullet ricochets off the painting and hits the chandelier, causing it to fall upon the three men. Bruce races toward Thatch’s room, which he assumes to be nearby, only to find him dead; a hole in his chest with ties to hold the wound open, creating a circle with lines sun-bursting out in every direction.

The backup has Bruce taking down a Russian fighter in the U.S., and impersonates him as he tries to infiltrate a Russian crime family to take them down from within. He fights in an underground fight league, and meets the future leader of the crime family, Princess Vik.

Analysis: Something special happens when Scott Snyder works with artists he has a history with, and that trend continues here with Rafael Albuquerque. Their combined storytelling is amazing, making for easily followed scene transitions and flow. The pacing is amazingly well done here, with Alfred’s past being sprinkled in throughout this first issue. I’ve always felt as though Alfred has been underutilized, especially considering the recent reminders of his past in MI6, you’d think he’d be more useful in the field. This story seems to put that expertise to the forefront, adding real depth to Alfred’s character, as well as his relationship with Bruce. Albuquerque’s inks is something to look over as well, as he perfectly contrasts the page.

Steve Wands does a great job lettering here, and I loved how he did the balloons with the singing part. It helped you immediately get the point without having to think about it – very well done.

The true standout in this issue for me, though, was Jordie Bellaire. Now, I know she’s no newcomer, and that she’s received plenty of praise before, even from myself in the past… but this was something different from her that I’ve never seen before. Her color palates scream “Miami!”, and she worked each page like it was a canvas. Sometimes utilizing watercolors to darken up and shade areas, but her use of warm pastels and with cool neon colors throughout mid this book look amazing. Many times, especially during the chase scenes she colors wildly, getting outside the lines, which make a still picture look as though things are moving fast. Just brilliant stuff all around.

Pick Up or Pass: I know that this is one of DC’s more expensive regular books, sitting a $4.99, but I feel like this is a must buy… plus, it now comes with a free digital code, so buy it, redeem your code, and sell the physical copy if you are looking to save some money.

In Conclusion: This book does a perfect job in starting a new story, but also calling back to things that have happened in past issues… Not to mention that this is the Alfred/Batman story that I’ve been secretly wanting for years now.