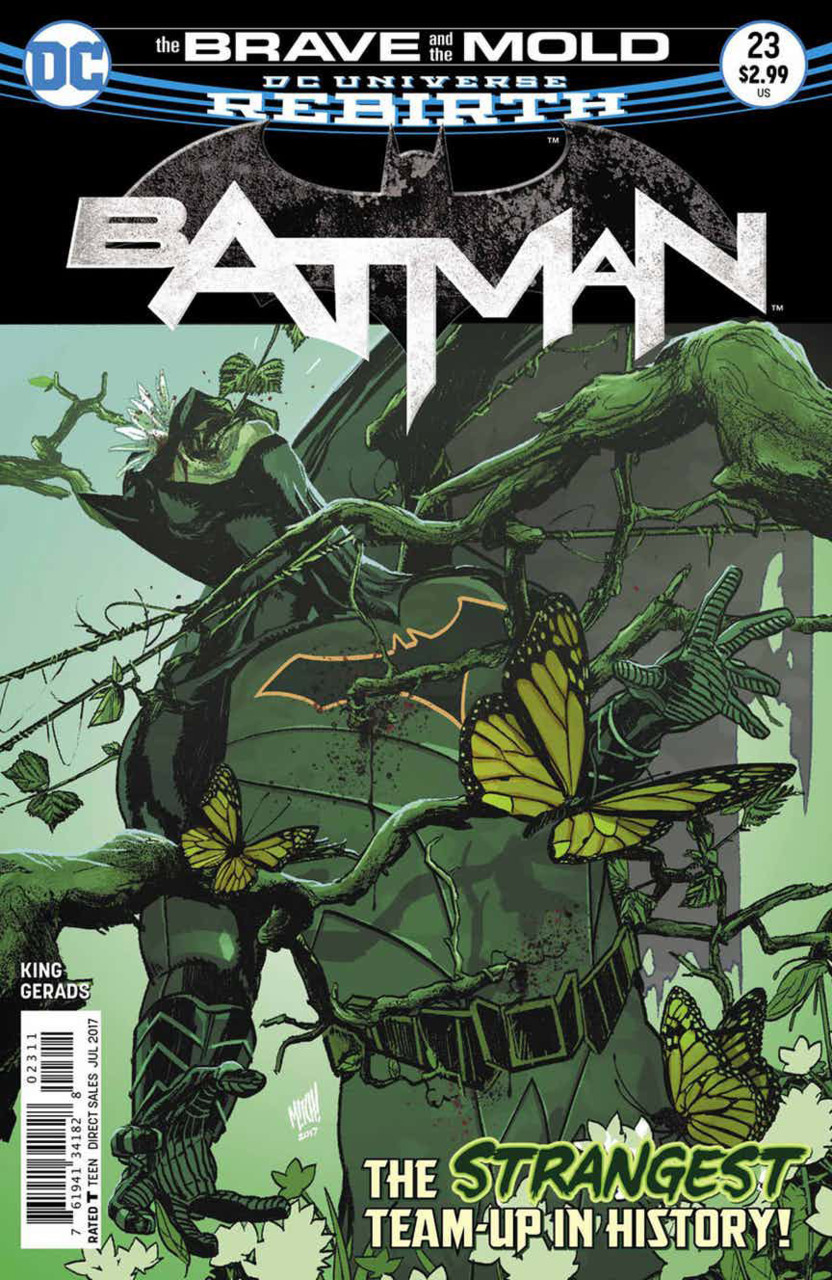 First and foremost, this issue is dedicated to the memory of Bernie Wrightson, who sadly passed away in March of this year following a battle with brain cancer.  Wrightson was known for many of his artistic endeavors, spanning six decades, but one of the longest lasting was his creation of the character Swamp Thing with Len Wein.  This installment of Batman may not have been purposely released so closely with Wrightson’s passing, but the timing and subject matter of “The Brave and the Mold” make it that much more of a powerful and fitting tribute to the man’s legacy.

It’s nice to see Tom King reteamed with Mitch Gerads for his work on Batman.  The pair may be most known for their collaboration on Vertigo’s Sheriff of Babylon, but they also put out the wonderful two-part Batman story “Rooftops” earlier this year.  This one-off tale of death and life plays just as small as that previous story, but embraces the wider universe within Batman resides.  Everything kicks off with a good old fashioned murder.   The victim is singing the classic Irish tune “My Wild Irish Rose” just before he gets two shots to the head from an unknown assailant and dies.  While Gordon and Batman survey the crime scene, the creature Swamp Things arrives via mold.  See what I mean about the “wider universe” playing into this story?  After giving Gordon a scare (and of course, not phasing Batman in the slightest) he sheds some light on his appearance – the victim is his father.  The scene plays out well and is something I greatly miss from older Batman stories.  The street-level action of detective work and murder solving.  Back at Wayne Manor the pair get into the details regarding Swampy’s history with his father, or lack thereof.  He was a presence in his life, but not significant, and the loss is weighing on him in a strange way.  Here we see Swamp Thing struggling with aspects of his humanity.  As an almost God-level character he sees the greater picture when it comes to life and death.  At the same time, however, when things become personal they tend to become confusing as well.  Fans, please note the presence of the family portrait from Peter Tomasi’s run on Batman and Robin, as well as check out Jessica Nilo Alves’ wonderful commentary on it in her “This Week in the Batcave” column.

Ever the detective, Batman works the evidence.  The murder occurred on the 84th floor of a high rise building, meaning the culprit had to have some means of traveling through the air.  If only there was an obscure D-list-turned-fan-favorite character given new life by Tom King with such means.  Enter the triumphant return of Kite Man.  Each time he pops up, I say this is the last time I’m going to enjoy it as much as I do, but King keeps his appearances short and sweet and it hasn’t worn out its welcome for me quite yet.  Batman pulls the classic move of knocking the flier out of midair and then interrogating them while in freefall.  Kite Man eventually cracks and gives up the information – he pawned a kite.  The detective work continues as the unlikely duo follow the clues, from the pawn store to the weapons dealer who bought the kite to the eventual suspect in question – another dug up from the past character in Headhunter.  It’s nice to see the 90’s are still alive within Headhunter.  With some help from Swamp Thing’s communication abilities with grass (again, “wider universe”) they quickly narrow down a location.  The motive turns out to be simple enough.  Headhunter met Swampy’s father while drinking one night and struck up a conversation regarding the song, “My Wild Irish Rose,” the man was singing.  While discussing the finer points of the meaning of life, he lets it slip that his son was Swamp Thing and everything went south from there, resulting in the murder.  Thing go sideways almost immediately, however, as Swamp Thing becomes undone and murders Headhunter before leaving a distraught Batman, who did not sign up to be party to murder, alone at the close of the story.

The themes of life and death are prevalent in most Batman stories.  The character is built on death.  This makes the team-up between Batman and Swamp Thing much more logical given the context of the death of a parent.  King’s dialogue throughout walks a fine line between the tongue-in-cheek acknowledgement of the astounding absurdity of the story and the philosophical approach to life and death.  There’s something for everyone here.  He makes a powerful point that by writing something off as “dust to dust” we are doing a disservice to the departed.  Life is change, death is another change.  This hits home with Batman for obvious reasons, and draws the reader into a tale of unexpected depth.  I can honestly say I wasn’t expecting this deep of a story from a book with a pun as its title.  Seeing Batman understandably shaken by Swampy’s suddenly very human action of revenge was unexpectedly meaningful.

While King should be commended for his work here, this book was a team effort.  I really want a Mitch Gerads Batman book now.  I always enjoyed his sketchy art in Sheriff of Babylon, but he used a much tighter approach to this story.  He was able to let himself go a little with Swamp Thing, but the rest of the story was very downplayed.  He really nailed the inherent darkness of the character while keeping everything clean and separated.  There was no muddling of the pages as we see far too often with other artists with similar approaches.  His pacing and panel setup was simple and effective – a safe approach for a one-off story.  I’d like to see more of Gerads on the character and see what he can do in a longer story.

After the breakneck pace of “The Button” it was nice to have a breather in this story that, while fast paced, played out simply and naturally over its course.  We’re gearing up for what appears to be another “larger than life” Batman story.  I’ll continue to be hopeful for Tom King’s work, but I can’t help but feel like these smaller stories are where his talents are best used.