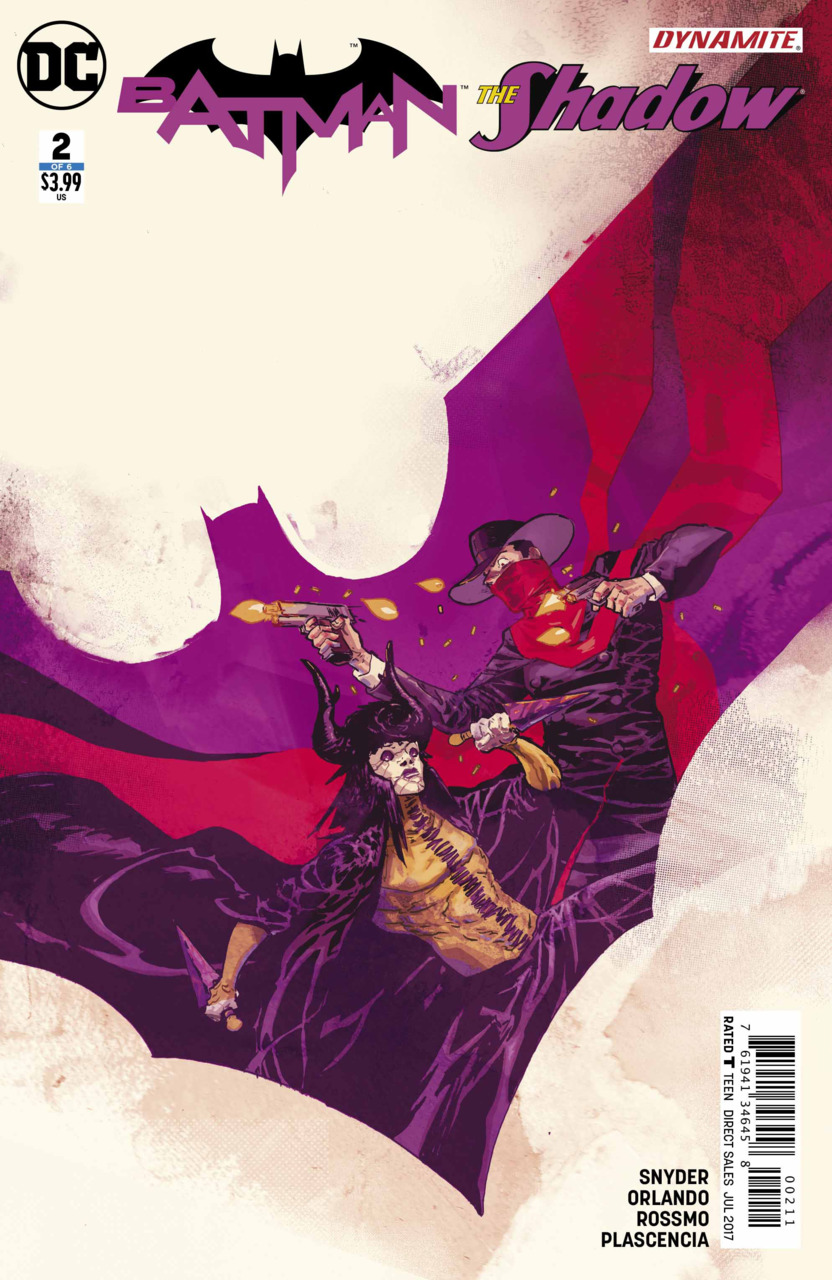 (Spoilers ahead) The story continues in the French Alps with Batman squaring off against the Shadow, who had moments earlier been Batman’s old mentor, Henri Ducard. The two cross swords while the Shadow tells Batman that things are not what they seem and that they are after the same killer, “the Stag”, and the Shadow gives Batman a glimpse into his history before disappearing into thin air. The Shadow then visits his agents, Harry Vincent and Margo Lane, to warn them they are in danger from the Stag. Batman continues his investigation in the Batcave and finds the killings are linked to the winners of a Gotham Humane Award and discovers the next victim is Leslie Thompkins. The story moves to Leslie alone in her clinic where she is attacked by the Stag, which is quickly interrupted by Batman. Batman finds himself overpowered by the Stag, only to find that Leslie is actually the Shadow in disguise. The Stag is shot and falls out of a window, only to be found to have disappeared. Batman overpowers the Shadow by shocking him with the taser in his gauntlet. The Shadow explains that the Stag is killing people to gain entrance to Shamba-La, a mystical place where the Shadow gained his powers, and that he only needs one more act of evil to tarnish his soul and reach Shamba-La. The issue ends with the Stag appearing once more, this time in a prison cell, much to the Joker’s surprise.

Snyder and Orlando continue to build on the solid foundation of the previous issue with great success. Batman continues to distrust the Shadow throughout the story, believing him to be the killer. Batman has always been a very empirical character, only trusting what he sees or can prove. It’s an interesting idea to have him face off against the Shadow, who operates by clouding the minds of his prey and lives in a more grey and supernatural world. Batman seldom works well in an otherworldly setting but in this case, it is well executed. Batman’s reactions of anger and doubt feel very appropriate for the character and is very much in keeping with Snyder’s take on the character in previous stories like the Court of Owls. Batman can’t believe that something he can prove isn’t true and that doubt leads him to be taken off guard as he confronts the Stag. In exploring Batman as having a flaw or two, I’ve always found it makes Batman a more compelling and human character, which plays off the portrayal of the Shadow nicely in this story.

The Shadow is well handled throughout the story. Bonus points should be given for the decision to give the Shadow’s backstory in a single splash page. The writers don’t waste any unnecessary time, telling the basics of who and what the Shadow is in a quick and efficient manner and then moves on with things. There will certainly be more time to spend with the character to be more fully developed as the story continues. As opposed to the more human character of Batman, the Shadow by contrast is portrayed as more of a force of nature in the story then as a man, with his former agents remarking that he has lost, or never had, his humanity. Orlando and Snyder continue to suggest that Batman has always been unwittingly connected to the Shadow in some way and have yet to fully address the plotline and it is a compelling mystery to see where the story goes with this over the remaining four issues. Equally compelling is the ending of the issue on the Stag meeting the Joker. I’m going to reserve my comments on this ending for next issues’ review, but suffice it to say, it’s a great story choice.

The art by Riley Rossmo continues to fit the story like a glove and straddles the line of being almost surreal without crossing the line into Kelly Jones territory. There is almost a Tim Sale quality to the art that gives the book a noir felling that is fitting for the characters and their world. Rossmo’s Batman is visually interesting and there seems to be a very slight Adam West influence in Rossmo’s cowl design that feels unique without being off model for the character.

Company crossovers tend to not have a large degree of quality to them and seem more designed for making a quick buck then telling a good story. So far, this series raises that very low bar with a compelling and stylish story that is worth your time and money.