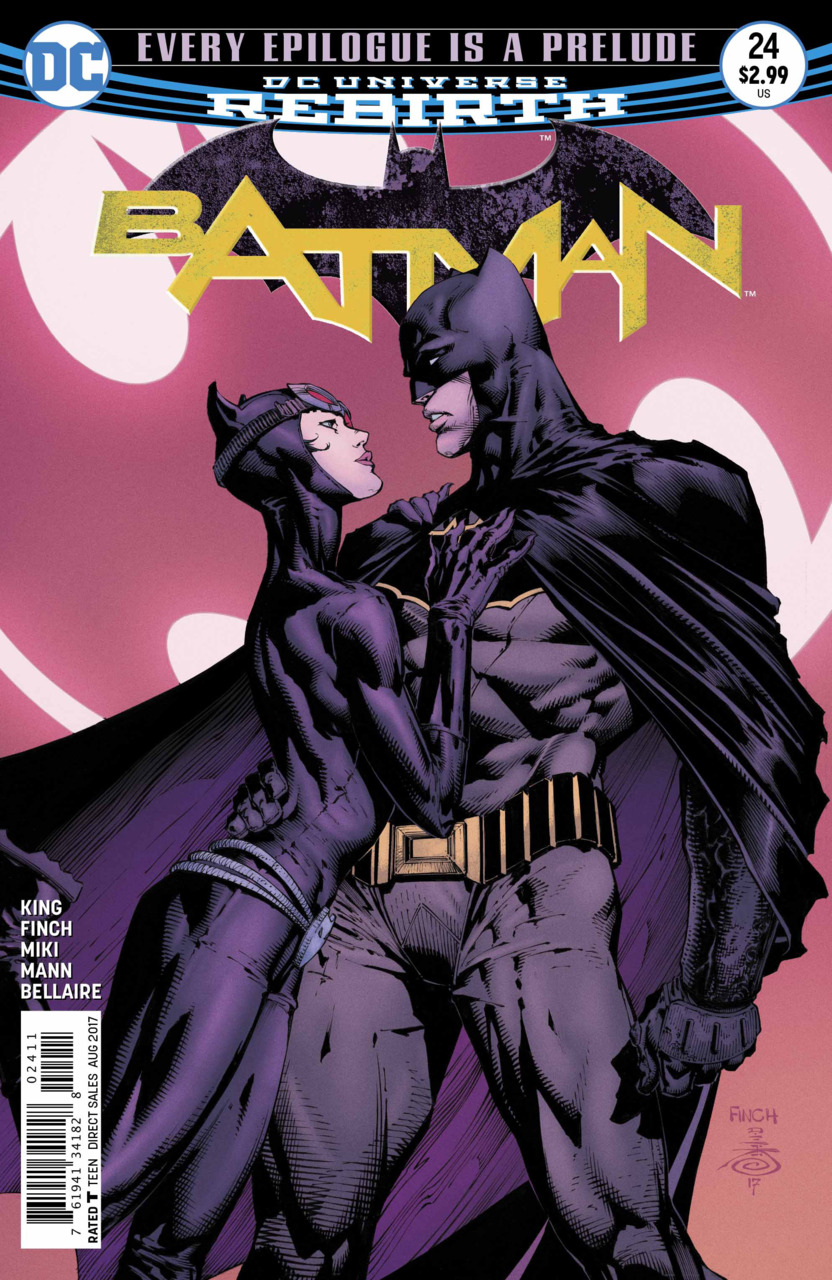 (Spoilers ahead) I like to think I’m a fairly easy-going guy.  I don’t get bent out of shape over much and I tend to let things play out as they will.  However, my level-headed demeanor has been cracked.  Today, I find myself worked up over a Batman comic, a feeling which I have not been familiar with for some time.  There have been ups and downs to the past year of Batman comics from Tom King and crew, but nothing that truly warrants overreaction on either the positive or negative side of things.  It has kept the pace and not upset the status quo.  At least until the past month.  Let’s dig into it.

“Every Epilogue is a Prelude” is not just an awesome title, it is an issue that will be divisive amongst fans.  The slow issue serves as a winding down point for King’s story arcs over the preceding year.  We get closure on Gotham Girl.  She’s recovered from Psycho Pirate’s influence and is curious about her role in life.  Superheroics were more her brother’s thing, should she continue?  We get that answer.  We even get a touching thank you from Gotham Girl to her rescuer.  It’s nice, poignant, and quick.  It also makes Batman dwell deeper on what he himself wants out of life, a question that has been pressing on him since reuniting every-so-briefly with his father from another timeline in the pages of “The Button.”  This, of course, leads into the moment everyone’s been talking about.  Batman proposes to Catwoman.  For all the pages of introspection and talk of the future, the last moment makes it nothing more than background noise to me.  And with that, I finally found my emotional foothold in Tom King’s run that I feel like I’ve been missing.

I want to see where this goes.  The question of whether or not Catwoman says yes really means very little in the long run.  The key moment here is Batman putting himself out there.  The character is notoriously walled off, and if you’re reading this website, I’m sure you’re more than acquainted with that fact.  Coming out of the emotional moment where his father urged him to give up the cowl, I assumed we’d be in for more of Batman burying his feelings with crime fighting.  It’s what we’re used to.  Maybe there’d be a moment where he allowed himself to think of future possibilities, but in the end he’d succumb to his base character – he’s not Bruce Wayne, he’s Batman.  King kind of threw me for a loop by having Batman pop the question.  It’s opened up a world of possibilities for the story.  Do I expect things to change?  Not in the long run, but I expect this to play out more deeply while King’s still on the title.  I’m interested in seeing a Batman who wants to have it all.  Who admits to himself that maybe he does deserve to be happy.  Moreover, one who admits that he isn’t actually alone.  The moment where he tells Catwoman he needs her was far more impactful than the proposal.

Finch does his best with his sections of the book.  He and Danny Miki are a solid team and always give a good effort.  They didn’t have much to work with as the issue was light on the action, but they made sure it wasn’t visually boring.  Finch has also been showing a great improvement in his work on faces and really has echoed some of what I thought was Capullo’s best work on the title.  While they handled the Catwoman-centric portion of the book, Clay Mann and Seth Mann contributed the interactions between Gotham Girl and Batman.  While a solid effort, they have some room to grow artistically.  Their setups are engaging, but the execution is lackluster.  I’d like to see them develop a little more than take another crack at Batman.  They have a sketchy, thin-line style that I like, but their proportions and facial structures definitely need some work.  Bellaire, normally even keeled, seems to have a rare misstep with the overly saturated daytime scenes that were distracting during an emotional scene.  It wasn’t the best work by the team and, while I understand the stylistic approach and how it factored into the story, it didn’t land with me.  Not terrible.

I enjoyed the moment, but as a long time reader I know exactly what this means in the long run.  Not much at all.  I am less than thrilled, however, that it seems we won’t be continuing this line of thought for some time.  Issue #25 dives right into the “War of Jokes and Riddles” storyline which is set to run for the next few months and seems to take place in the past.  Whether or not the creators will be touching on the present in those pages remains to be seen, but my money’s on no immediate resolution.