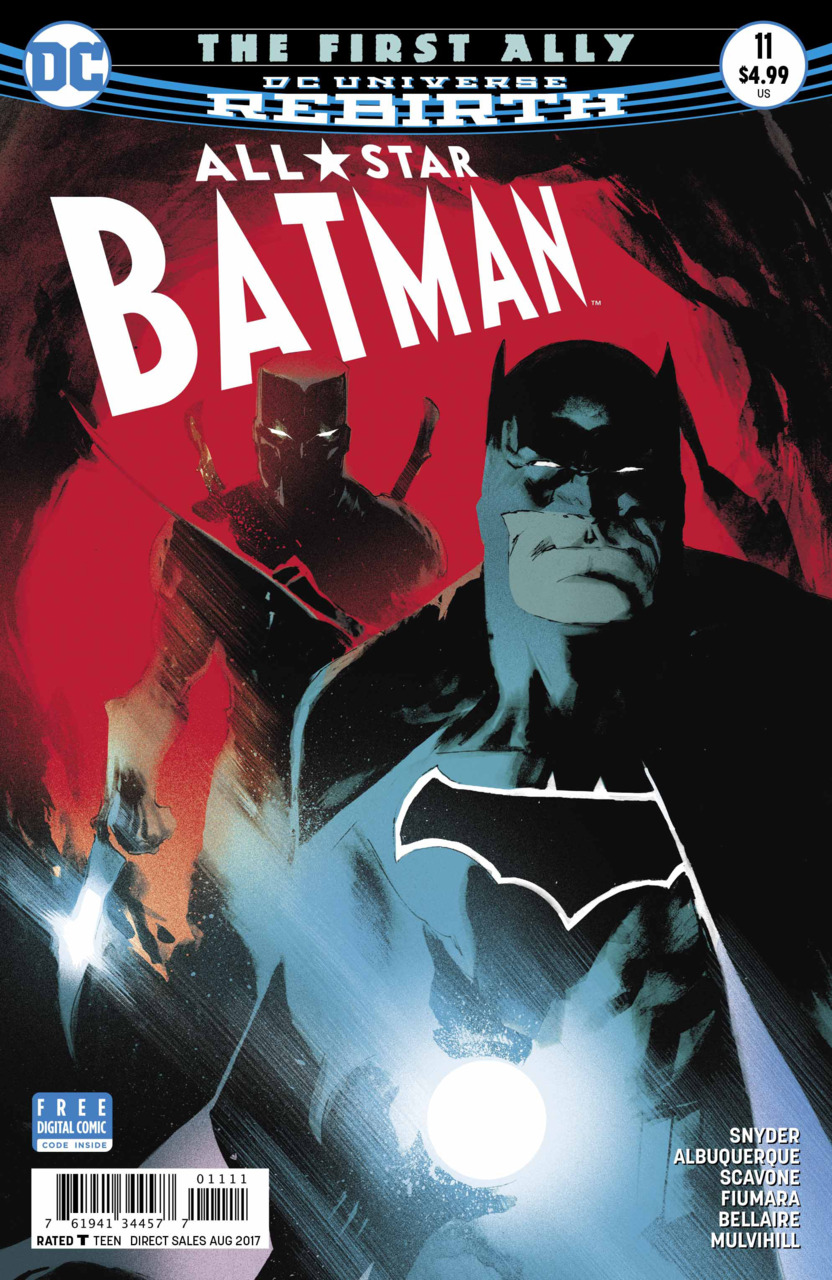 To catch you up: This is the second issue in a new story arc. Batman is trying to capture a device called the Genesis machine before it falls into the wrong hands. However, someone from Alfred’s past has shown up to stop them.

Synopsis (Spoilers): We open in an unknown time in the future inside the Batcave. A hologram of Alfred appears in the middle of the floor. He talks about the machine Bruce has been working on that will clone him every twenty-seven years, therefore cheating death. He’s also making way for Alfred to do the same. Alfred fears that he’s instilled in Bruce this feeling that there is always a way out…

Currently, Bruce has locked himself in the room with Thatch’s dead body, while the gang leaders attempt to open the door. Bruce uses an old hook and rope to make his way to the ceiling, where the killer also made his escape. Alfred is driving the boat near the roof, but isn’t there yet. Bruce, not having time to wait around, jumps into the water below. He is attacked by crocodiles, as the gang leaders shoot out the engine of Alfred’s boat. The crocodiles are incapacitated by an unknown source, and then a rope wraps around Bruce’s neck and pulls him underwater.

Alfred recaps the relationship with his father. The anger he felt towards him for leaving his own family to take care of another. He talks of the things his father missed, including the death of his mother. (Note: as we flash through these scenes, each time it goes back to Wayne Manor, Mr. Pennyworth is winding the grandfather clock to 10:47… just thought that was a neat touch.) Alfred, driven by loss and anger, dedicates his life to “the mission”, by joining the military. And Alfred is good at what he does… really good. Then one day, he is approached by a man named Briar who is with MI-5. He invites Alfred to join, but before he allows Alfred to give an answer, he points a gun at Alfred’s face, and pulls the trigger.

Bruce awakens inside a body bag. When he opens it up, he finds Penguin, Black Mask, and Great White all waiting for him. They compliment him on his Bruce Wayne disguise, but criticize that jaw line… the fakers never get that right. They inform him on the Genesis Engine, what it does, and what they want him to do with it… the Engine can create cells, allowing you to grow living tissue. Hush wanted to make himself Bruce Wayne. Fallen into the wrong hands, someone could grow an entire army. These three don’t want to loose business over such things, and ask Batman to destroy it, giving him the coordinates of the machine.

Batman makes his way underwater, and Hush (still tied down) mocks Alfred, suggesting maybe he set this as a trap for Bruce… Alfred responds by knocking Hush out. Batman finds a new super submarine that uses a pressurized air bubble to surround the ship, decreasing drag and increasing speed. Dubbed the Flying Dutchman, Tiger Shark uses this place as a high-stakes casino. Batman makes his way inside, and finds a few dead bodies right away, and knows the killer is back. He rushes to Tiger Shark, and finds the killer as he’s stabbing him. The two fight for a bit, until he cuts the glass to the ship, compromising the integrity of the vessel. Batman does what he can to hold it in place, but his subscapular artery has been cut. He will be unconscious in seconds, and the ship will implode… or he could speed up the process and leave a bomb, which he does. Alfred is making his way there to save Bruce, but on his way there, he sees Briar, helping up the masked killer, as the submarine explodes.

The backup story moves along quite nicely as an undercover Bruce has earned the trust of the Russian mob family. He works his way to an elite ball they throw, and steals the information he needed to find where the weapons being shipped to Gotham are coming from… However, Princess Vik now knows his secret.

Analysis: Snyder’s pacing in this story was fantastic. How he cuts from scene to scene is done spectacularly. The collaboration he has with Albuquerque is amazing. The two really do well on the little details that make it memorable. Snyder’s take on Batman and Alfred is quite different than we are used to, maybe even disagreeable at times with where we ourselves would take it, but I’m starting to connect the dots of where this is going and I’m liking the story. He’s being consistent with his stories from the past. I didn’t see it till now, but he hasn’t really changed his overarching Batman story… he’s just changed how he’s gone about it.

Albuquerque’s storytelling is amazing. I love this guy’s art, and can’t really see any flaws in it. The more unfiltered, the better. Although Jordie Bellaire’s colors don’t reach out and slap you in the face like they did last issue, it’s still perfect… Seriously, it’s amazing. The texture and vibrancy of the colors on each page is beautiful. I love this pairing, and hope to see more of these two together in the future. Steve Wands letters here, and I like that they change the color of the font for the masked mystery man. It immediately allows you to know who’s talking, even though we still don’t quite know who he is.

Pick Up or Pass: Pick up. With this current team, this is my favorite book right now.

In Conclusion: With over-the-top ridiculousness, paired with emotional storytelling makes this book something special.