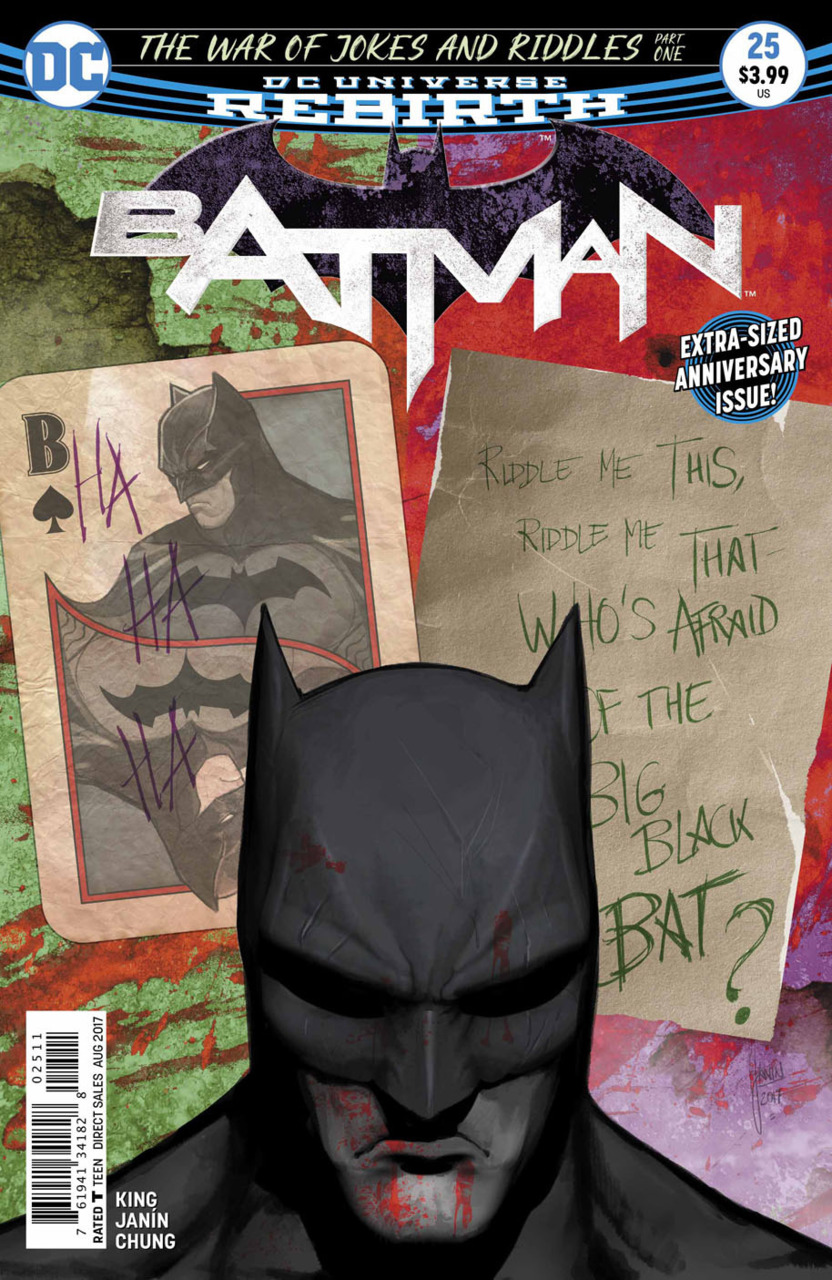 I’ve been both looking forward to “The War of Jokes and Riddles” with both anticipation and wariness.  Anticipation for the return (albeit in flashback form) of two of my favorite members of Batman’s rogues gallery and wariness due to the very real possibility of this entire endeavor being a creative misstep.  I realize this analogy would fit much better if the villain of the piece was Two-Face, but I’ll have to force it to apply to the two main factions of the titular villains.

First, however, let’s go through the action.  This is, for the most part, a flashback story.  One told to Selina Kyle from Bruce Wayne, for reasons yet unknown.  Early in Batman’s career, during a crime spree of Joker’s, Riddler escapes custody under the guise of assisting the GCPD with tracking down the criminal.  He dispatches the lieutenant and, in typical Riddler form, outsmarts the rest of the GCPD and walks free.  He heads straight to Joker’s endgame, arriving even before Batman figured out the location.  Here, Riddler presents Joker with his thoughts on the current state of Gotham – Batman has ruined the fun.  Joker can’t laugh because Batman has made everything predictable in his constant victories, and Batman himself has become a puzzle Riddler is unable to solve.  Instead of hearing out Riddler, however, Joker decides to shoot him to see if it would be funny.  It doesn’t work.  Batman arrives and leaves Riddler for dead while heading after Joker.  End of part one.

First, how the anticipation paid off for me.  This looks like it’s going to be, if nothing else, a fun story.  It’s clear from the beginning that this is going to be a big story, as well, touching on a number of different corners of The Batman Universe.  Setting the story in the past also allows the team to simplify it somewhat.  This is an early-days Batman, before the extended Bat-Family, so I’m sure we’ll be getting a “hero vs the world” style approach as things begin pilling up.  I also appreciate the much more verbose take on the book we seem to be getting, as opposed to King’s normal “show don’t say” approach.  I’ve always enjoyed King’s dialogue and been slightly offput by the lack of it to date in his Batman work.  Plus, this book has never been better than when Mikel Janin is laying down the artwork.  I look forward to seeing him really get some interesting work going for this story.  He’s definitely not going to be short on opportunities.

Next, the wariness.  King has not had the most solid of grasps on the characters in The Batman Universe.  I’ve never liked the idea of a outwardly psychotic, violent Riddler.  His brutal murder of the Lieutenant skewed his character away from the mental prowess he showed immediately after.  The two scenes didn’t play well next to one another.  Riddler’s the smartest person in the room, leave the hand-to-hand carnage to characters like Zsasz.  If the final splash page is an indication of things to come, he’s going to have his work cut out for him.  There’s a lot of variety there.  It’s time for him to show us why DC gave him the reigns on this title and put doubters (like me, to some degree) to rest.  The timing, however, is questionable.  It seems like we’re finally getting some forward momentum on the title with developments from “The Button” and the ending of the Gotham Girl/Psycho Pirate/Bane stories.  I had the same wariness when Scott Snyder’s run devolved into “Zero Year” and never recovered in my eyes.  Would this have worked better as a mini-series, tangential to the main book?  It could have given editorial a chance to capitalize on the nostalgic aspects while drawing older readers in.  At the end of the day, I just want this story to have a clear ramification on the overall title if it’s going to be part of it.  I don’t doubt that King has a plan and a reason for this step back in storytelling, I’m just wary.

The opening salvo of “The War of Jokes and Riddles” is as good as I could have hoped for.  I can easily overlook the few missteps due to the overall strength of the outing.  I already like it much, much more than “Zero Year,” not that that’s saying much.