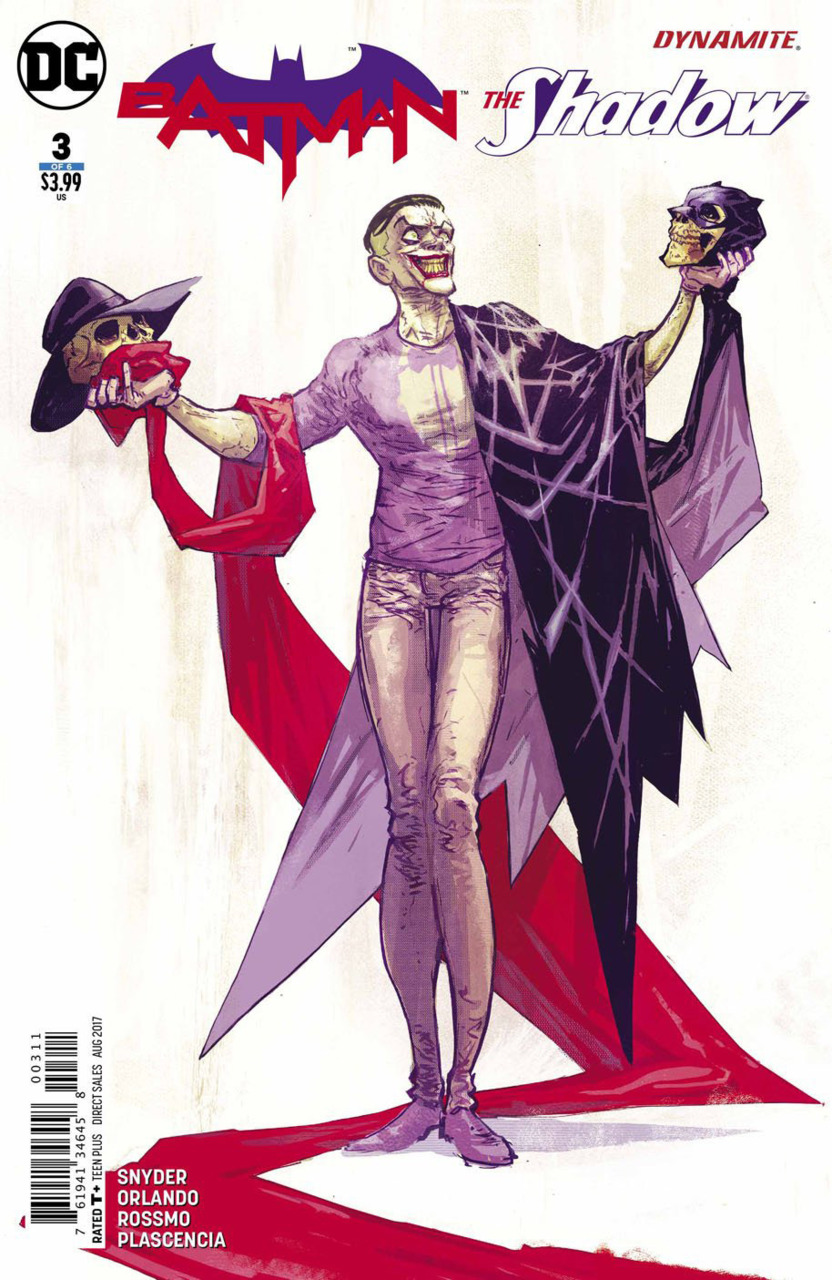 (Spoilers ahead) The Stag has combined forces with the Joker, while Batman has the Shadow chained up in an underwater base at the bottom of Gotham harbor and guarded by Alfred. Batman tracks the Joker and Stag and is captured. The Shadow escapes his chains and goes off to rescue Batman and the story ends with the reveal that Batman is intended to be the Stag’s final victim because he is destined to become the next Shadow.

The story slows down in this issue and gives the series room to breath before moving forward. Not a lot actually happens in terms of moving the plot forward and the issue essentially boils down to two parallel conversations between the Shadow and Alfred and another between The Joker and The Stag on the nature of evil.

Alfred starts off by relating to the chained up Shadow a story from his MI6 days when he encountered pure and unexplained evil and proceeds to pull a gun on the Shadow and demands that he speak to him, stating that he sees the same evil when he looks at the Shadow. I’ve always enjoyed the glimpses into Alfred’s past as a soldier and spy, and the two page spread is effective in depicting something horrifying. It does feel like a bit of a cheat that Alfred conveniently has an anecdote for a story that no one has ever heard before and doesn’t feel like connects to the rest of the story in any meaningful way. The supernatural rarely enters into Batman’s world and as I doubt that the writers plan on going back to this flashback over the course of the rest of the story, it would probably have been better for Alfred to tell a different story that didn’t require more of an explanation.

Of course, the gun in Alfred’s hand doesn’t stay there very long and turns out to be another of the Shadow’s illusions. The Shadow goes on to pick up what he has continually hinted at throughout the story: that he has been secretly been training Bruce Wayne for years. The Shadow goes on to reveal that he been building an army of vigilante heroes though out the years to battle against the Stag. It’s a nice touch that they worked characters such as Green Arrow and the Reaper from Batman Year Two into the sequence. It continues to be an ingenious idea that the Shadow would be secretly behind all of these vigilante heroes as without the pulp hero’s influence, we probably wouldn’t have the Batman we know today. Its not a shocking moment when Batman is revealed to be the Shadow’s intended successor, but it feels fitting for this story.

The meat and potatoes of this issue are in the back and forth between The Joker and The Stag. The characters are written as two cold blooded predators comparing notes, like a couple of Great White Sharks talking shop over a beer. The Joker has been interpreted in many different ways over the years, and his actions are often described as simply being insane. Personally, I’ve never liked the Joker explained away as a product of mental illness as that takes away the Joker’s accountability for his actions. This take on the Joker is very much is line with Scott Snyder’s previous uses of the Joker, showing that the Joker isn’t crazy at all, he’s just evil. He kills because he enjoys it and just feels like it’s the way thinks should be which is far more interesting to me.

There’s also a nice ying and yang to the Joker’s flash and showmanship to the still and emotionless Stag. The Stag keeps referring to himself as an “Honest Signal”, which is a reference to a theory of behavior about communication without pretense in nature. A predator like a shark or a lion doesn’t apologize or rationalize the killing of a seal or a gazelle. It kills because it can and there’s no need for any sort of excuse. It’s a terrifying way of thinking for a villain because it is so alien to the notion that life is precious and its well executed here. While the cold and alien nature of the Stag works in the story, I do feel that Snyder and Orlando were smart to bring in the Joker, if for no other reason then to make the scenes with the Stag more entertaining as he doesn’t seem to have much in the way of a personality.

Rossmo’s art continues to fit well into the story. The characters, particularly the Joker and the Stag, are stylized to be effectively creepy throughout the story and the Alfred flashback and double page spread of Batman captured are well handled. I especially appreciate the inventive panel layouts, especially in the Shadow’s speech about his other students.

In summary, this series continues to be a compelling, well written story with some interesting character work and dynamic art. Go buy it.