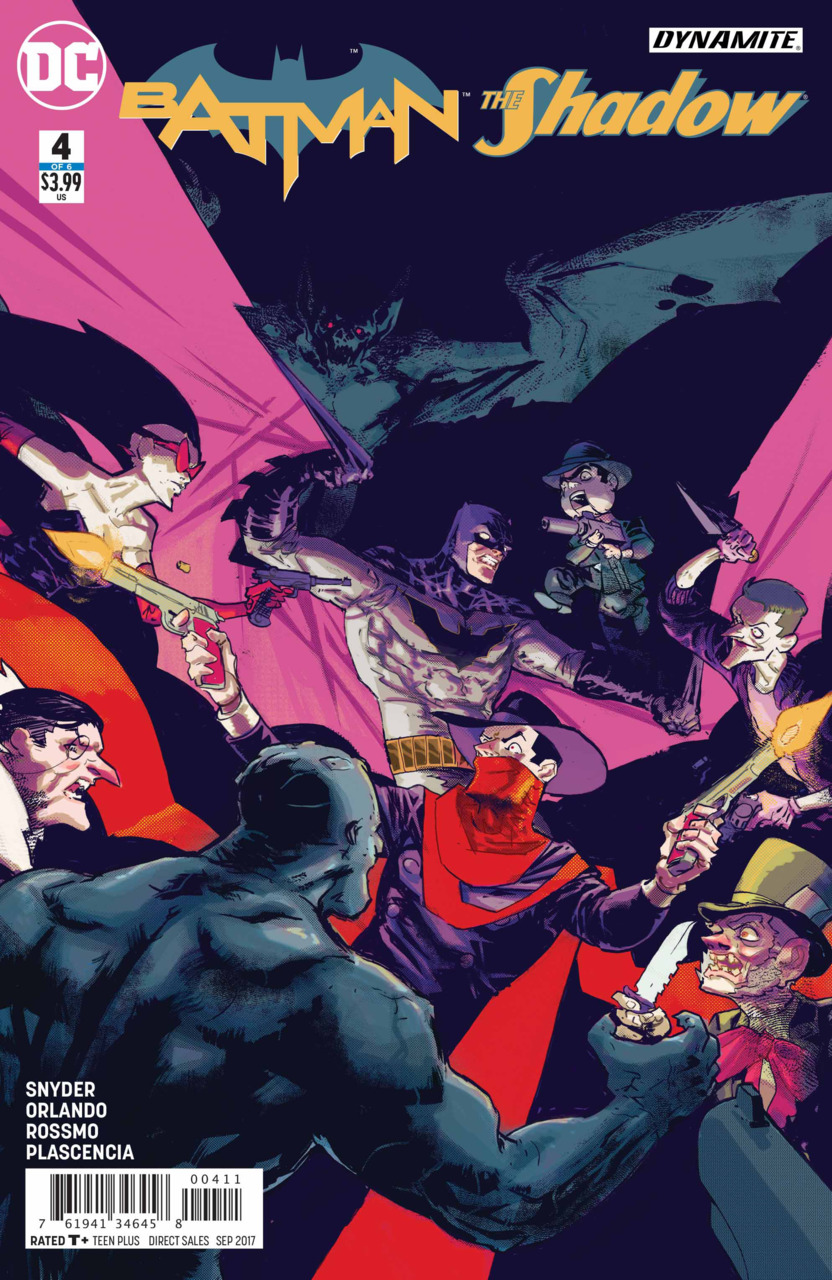 Overview: The Joker and The Stag have Batman captured and it’s up to the Shadow to save him before the Stag executes him and gains entrance into Shamba-la.

Synopsis (spoilers ahead): Batman is in a tomb far beneath Gotham City suspended by ropes over a fire.  He’s surrounded by a room full of his rogues gallery with The Joker and The Stag preparing to cut out his heart and gain access to Shamba-la. The ritual is interrupted by the Shadow who rescues Batman and the two go to work fighting off the room full of villains.  The fight is intercut by Commissioner Gordon and his men who are heading towards the club that is built over the tomb after being tipped off by Alfred that Batman needs help.  The Joker tries to stab Batman from behind and the Shadow attempts to kill the Joker.  Batman interjects leaving the Joker seriously wounded but alive and while Batman is distracted he is stabbed in the chest by the Stag.  The Joker and the Stag make their escape only to find the exit blocked by the police, who open fire on the Stag.  The Shadow works fast to cauterize Batman’s wound and Batman drifts off, whether dead or unconscious it isn’t clear.  The story ends with the Stag recovered from his bullet wounds and rescuing the Joker from his hospital bed, with the Joker naming the Stag’s next target: Margo Lane.

Analysis: This is a very quick and action heavy issue, with the majority devoted to the Shadow’s rescue of Batman and subsequent brawl in the tomb.  it’s a nice counterbalance to the last issue which was a serious of conversations and it’s a decision that will pay off nicely when this story is collected into a single trade.  The fight scenes are intercut with scenes of Gordon and his men rushing to the scene which do a good job of ratcheting up the tension of the story.

Steve Orlando handles the scripting duties of this issues and there is a lot of care and attention to detail in the dialogue and pacing.  The page with the Joker’s laugh slowly being overcome by the Shadow’s laughter was an inspired touch.  Orlando looks to have a good understanding of who Batman is as a character.  Batman takes the time to issue a “no killing warning” to the Shadow feels very appropriate and the moment were Batman risks a mortal wound to save the Joker from dying are prime examples of this.  Orlando also gives the story a good helping of cameos from other Batman villains, with obscure villains such as Magpie making an appearance.  There’s no real good reason for the tomb to be full of supervillains other that “its awesome”, but sometimes that is reason enough.  There’s also a fun Knightfall nod in one of the Gordon scenes that had me smiling as it’s a story that may or may not be in continuity now.  I am starting to wonder why there are so many hidden tombs and forgotten caves below Gotham City for just such an occasion as a ritual murder, but that’s a very minor concern.

I do feel that the Shadow and the Stag continue to be a little one note.  I think it comes down to source material more than a writing choice and the Shadow’s world may just not stand up as well when put side by side with the more colorful world of Batman and the Joker.  The Shadow and the Stag are written more like forces of nature than characters and seems to both be very single minded, the Shadow only focused with punishing evil and the Stag with murdering people.  I can’t help but wonder if the Shadow would be quite as interesting in this story if they didn’t anchor it around Batman.

The art by Riley Rossmo continues to fit the eerie tone of the series.  Rossmo was clearly told to have fun when drawing the scenes with Batman’s rogues gallery and I’ve enjoyed seeing his take on a lot of the classic villains, particularly Clayface and Man-Bat.  While it is absolutely its own thing, there’s a Tim Sale noir quality to Rossmo’s art that I continue to appreciate and I hope that Rossmo is able to hang his hat in a dark corner of Gotham when this story is done.

Final Thoughts: This issue was a tense and action-packed issue that was over far too quickly.  With only two issues left in this story, Batman/The Shadow continues to be the best series I’ve read this year.  Go buy it.