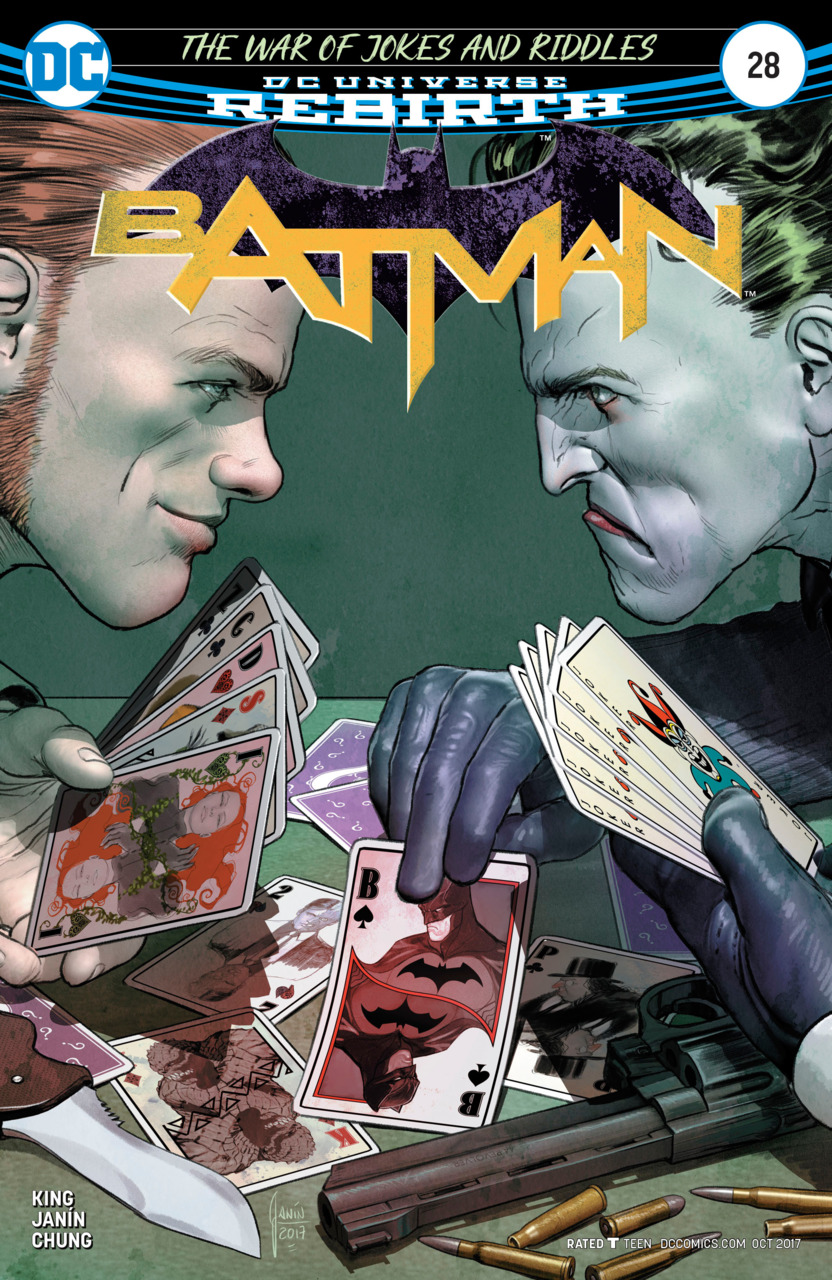 Overview: After last issue’s brief interlude with Kite Man’s tragic origin story, we’re back to Bruce recounting war stories to Selina.  In this installment, we are told stories of turf control, military involvement, and the great sniper battle between Deathstroke and Deadshot.

Synopsis (spoilers ahead): We pick the story back up a little further down the line, as the war between Joker and Riddler has taken over the majority of Gotham, with Joker’s forces claiming the west side, Riddler’s crew taking the east side, and Batman and Gordon trying their best to keep Uptown and Downtown areas safe from the chaos.  During a break in the fighting, Gordon was able to get a message to the respective leaders and gain meetings, hoping to find a way to end the war.  While Riddler responds with a thirty-seven page essay, Joker simply writes “Come in your undies” in lipstick on the back of a corpse.  As it turns out, both sides want the same thing:  Batman.  Gordon, of course, does not comply.  He does however, realize that the entire city is on a knife’s edge, so to speak, with both sides ready to launch the nuclear option and take Gotham down for good.  Gordon instead opts for involving the military.  As the war has progressed, most notable villains have taken one side or the other, or faced the consequences.  Not many neutral parties remain, with the exception, of course, of Catwoman.  Batman has a brief rendezvous with her after she refuses an invitation to join Joker from Kite Man himself.  She makes it clear that she is not cut from the same cloth as the rest of Batman’s rogues gallery.  Then they have some private time.  Without Gordon delivering Batman, both sides send their best snipers (Deathstroke and Deadshot) into the war zone in an attempt to bring down the Bat, but they just wind up fighting each other.  The battle drags on for days and racks up countless casualties.  Batman eventually catches up with them and puts them both down viciously enough for Deadshot to require eight hours of surgery to save his life.  While this was all going on, however, the military arrived to shut down the war with force, only to completely fail, leaving the future of Gotham back in the hands of Gordon and Batman.

Analysis: This installment is a strange combination of filler and progression.  I guess with the degree of compression King is forcing into this story that is to be expected.  The big takeaway is Batman beginning to lose control.  We know he’s working towards making what he considers to be a nigh-unforgivable decision, but until now we haven’t seen what truly pushes him to that point.  Here with the fight between the snipers we begin to see Batman lose his trademark collected veneer.   I enjoy how King has the emotion and frustration of everything the characters are going through come out in the form of violence.  It feels natural to the story, and makes a lot of sense as to how the build-up of all of the unnecessary deaths lead to his decision.  On the other side of the Good Vs. Evil line, there was nothing to write home about, which is where the filler aspect comes into play.  Joker and Riddler have mere cameos in the story which bears their name, which is unfortunate as I enjoy how King writes both the characters.  Speaking of King’s handling of characters, I need to mention again how much I enjoy the interplay between Batman and Catwoman.  He almost becomes an entirely different character around her, which says a lot about their relationship.

I was hoping that after having a brief respite, Mikel Janin would have came back with a barn-burner of an issue.  Sadly, King didn’t give him much to do here beyond a few splash pages of the heavy-hitters on each side of the war.  Where Janin was really given the opportunity to shine was the fight between Deathstroke and Deadshot, which fell a little flat.  His normally very polished lines seemed overly busy as he tried to play with the page designs, and some of the combat scenes were on the stiff side and almost felt rushed.  While we have the narrative through-line taking us through the story, I think Janin might be having a difficult time nailing down a visual through-line to keep the disjointed scene-shifts together.  This issue, even more so than the previous installments, felt like one long “Previously in Batman” recap page, and that knocked in down a peg for me.

Final Thoughts:  While this issue was mainly filler, there were some redeemable moments that at least made the read fun.  While this wasn’t my favorite outing of Janin’s, I’ll forgive him most anything if he includes that scowling Joker visage.  I’m still intrigued by King’s approach to this story, wherein Bruce recaps a much larger event-level story that we were previously unaware of.  I feel like there should be a multiple-month storyline from the 90’s where all the Bat-Family books have “War of Jokes and Riddles” emblazoned down the left side of the cover, a la “No Man’s Land.”  Throwing more towards the 90’s feel of the story is the appearance of the old Jim Balent-era Catwoman costume, which was a very welcome sight.  All things said, I’m ready for things to continue picking up as Batman nears his inevitable meltdown.