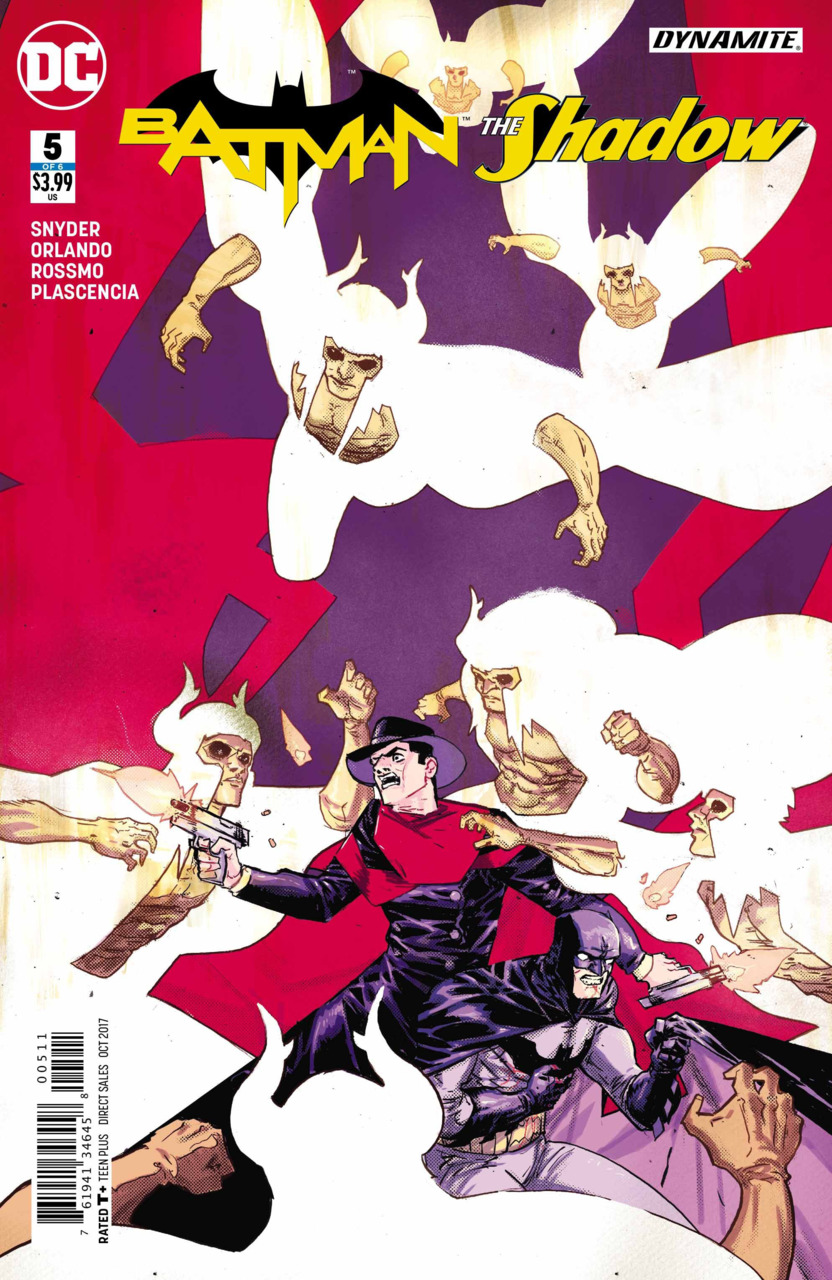 Overview: It’s a race against time as a mortally wounded Batman and the Shadow try to prevent the Stag and the Joker from reaching Shamba-La.

Synopsis (spoilers ahead): The story opens with Batman bleeding from his abdomen on an operating table as Alfred tries to stabilize him as the Shadow looks over them both.  The Shadow explains that wounds caused by the Stag do not heal and that Batman will eventually die from his injuries.  Batman forces himself to his feet and gets to work.  Its revealed that Batman slipped a tracking device on the Stag and from looking at surveillance footage of the Stag freeing the Joker from the hospital, it appears that the Stag is multiple people.  The story then moves to a cave in the Faroe Islands where The Shadow’s associates Margo Lane and Henry Vincent have been captured by the Joker and the Stag and are hanging upside down from the cave ceiling.

Batman and the Shadow follow the Stag’s signal to the island, with Batman wearing armor designed to keep him alive until the mission is over.  They track the signal to a cave covered in hanging skulls and the two descend in to the cave.  In the meantime the Joker taunts Margo and Harry, revealing that the door to Shamba-La is at the bottom of the cave and it will soon be open.  The scene is interrupted by the Shadow and Batman who free Margo and Harry as the heroes and villains begin to fight.  An army of Stags arrive and as Batman and the Shadow fight them off, the original Stag and the Joker leave for the door to Shamba-La.  As the two heroes follow, Batman begins to weaken because of his injuries.  The Shadow tells Batman that the Teachers of Shamba-La may be able to save his life.  The story ends with the door to Shamba-La open and the Stag’s army inside Shamba-La killing everyone inside and setting it on fire, with the Shadow realizing the Stag’s plan is not to steal from Shamba-La, but to destroy it.

Analysis: This is the penultimate issue of the series and is all about setting up the final battle.   Batman sustaining a mystical injury that can only be healed by the power of Shamba-La is far from a new idea, but it does an effective job of adding tension and an increased sense of urgency to the story.  It’s a plot device that looses a bit of impact on a character like Batman because lets face it, he’s going to be fine by the end of the story, but part of the fun of Batman is seeing him overcome impossible odds so its hard to blame the writers for giving Batman the additional challenge of being near death to overcome.

The Shadow has for the majority of this series been something of a one-note character and there is a definite attempt to give the character more depth and something of an arc as the story nears its conclusion.  The Shadow lectures Batman about showing criminals mercy and Margo reiterates to the Joker that the Shadow has lost much of his humanity.  During the rescue of Margo and Harry, the Shadow tells Margo that he does still care and in the battle with the army of Stags, Margo notices that the Shadow is only wounding the Stags, not killing them.  The change for the character is a little abrupt and there’s little reason given for the Shadow to have this change of heart, but the writers do well to call out how abrupt a change this is with Margo and Harry’s shock at the Shadow showing any regard for their well being or to not kill his adversaries.  I can presume that the intention is for Shadow to be rediscovering his humanity as a result of his partnering with a more inspiring hero like Batman, but it isn’t entirely clear in this issue.  It’s something that may play better in the context of reading the whole story in a collected edition and at the end of the day, its unfair to judge a character arc in story when there is still a whole issue left to complete that arc.

The Stag continues to be a mystery in this story and I like how any revelations about the Stag have yet to be fully explained.  Batman is convinced that the Stag is merely “theatricality and deception” but the story doesn’t really go beyond Batman making a statement.  There’s no explanation or unmasking of any of the Stag’s army and it does a good job of preserving the Stag as a supernatural character.  While Batman is often a more grounded character, in a story about ageless vengeful crime fighters and doorways to a magic kingdom, it would be strange if this story goes for a Scooby-Doo ending and reveals everything about the Stag to be a parlor trick.

I do find it needless for the cave in which this issue takes place in to be the same sort of haunted cave that Alfred tells the Shadow about in issue #3.  It doesn’t really add anything to the story and it feels forced and unnecessary to give Alfred a personal connection to a story when Alfred doesn’t seem to factor in to the finale of the story.

Rossmo’s art continues to give the book an eerie and supernatural tone that fits this story well.  Rossmo continues to give the Stag a creepy and unsettling quality, which given that the Stag is a character of very few words, makes the character much more compelling.  I’ve come to quite enjoy Rossmo’s inventive panel layouts, such as the angled panels as the Shadow and Batman are entering the cave, which serve to not only fit a great deal of story but work to give the scene a sense of the decent into madness that the Shadow warns Batman about just before they enter the cave.

Final Thoughts: This book continues to be a compelling story filled with atmosphere and tension as it nears its conclusion.  I’m looking forward to reading the complete story next month.