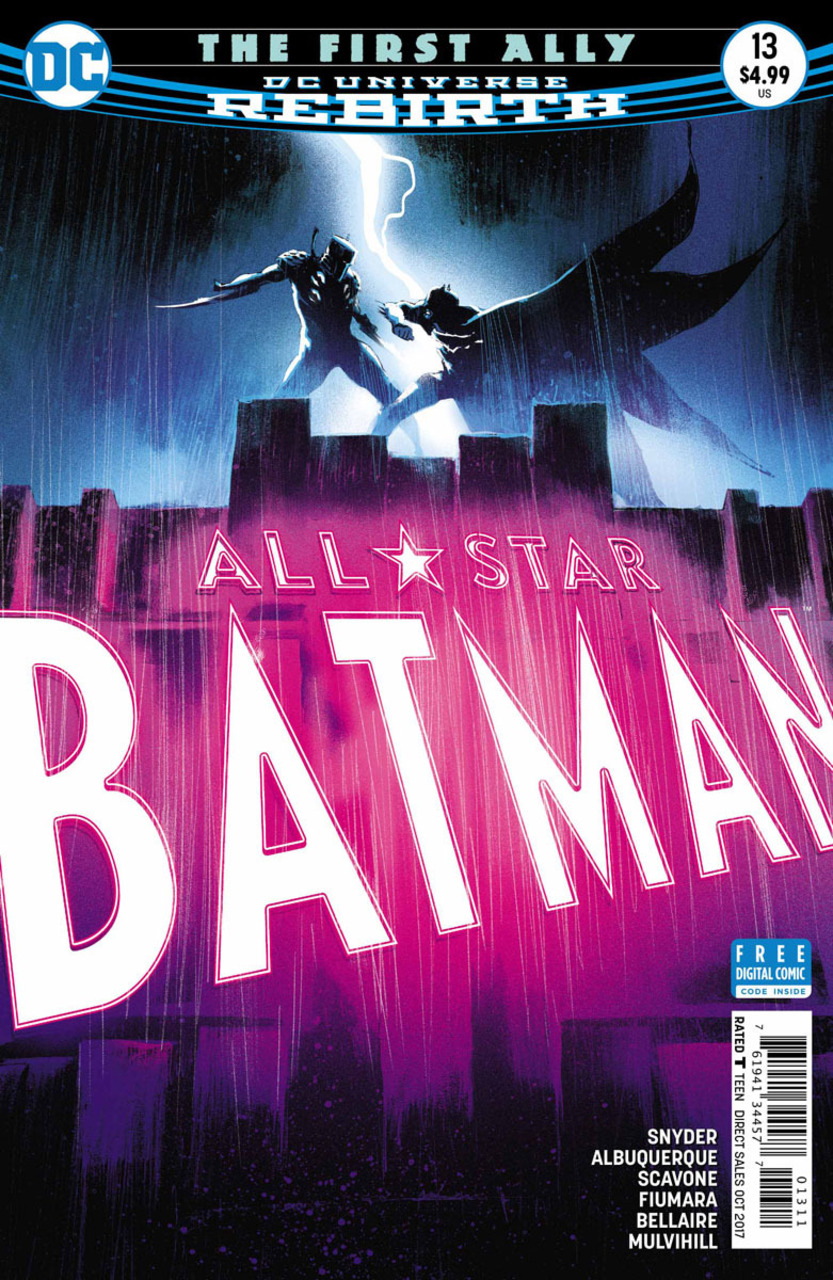 Overview: We get flashbacks from Alfred’s past, while in the present Alfred rounds up a crew to save Batman from the Black Knight.

Synopsis (spoilers ahead): In Bruce’s first week as Batman, Alfred bought a home in Cuba. He figured if he left, Bruce would stop this nonsense. He’d stop being Batman. We see an alternate timeline where that does happen. Bruce doesn’t stop though. Instead, in a makeshift batsuit, Batman is cornered by the GCPD — led by a Gordon with throat cancer. It seems they gun him down.

Currently, Batman is free falling along with Alfred and attempts to save him. Alfred, fearing that he’ll take them both down, fights against him. Batman’s cape rips under the weight of the two, and they get by using a banner from the Wayne Hotel that just collapsed.

Years ago, in Morocco, Alfred (with Briar in his ear) fights and escapes from agents of MI5. Once he reaches their base, Briar removes a sample of the virus Alfred was transporting in his bloodstream and intends to send it to MI5… he also gives him the antidote and they drive off.

Back in the present, Batman and Alfred dig out of the rubble, and Batman confiscates a motorcycle from a biker, and gives chase to the Black and Whites’ helicopter.

Back in the day, Alfred hears a crash in the middle of the night and finds a drunk Briar. He opens up about his son being in the Nemesis program, and dying because he was protecting his father. Briar came to realize that to be the Black Knight, he had to no longer have any ties to a normal life. He tells Alfred that he is proud of him. He says that he has to leave for a few days, but when he comes back, they’ll build his helmet. Briar heads to Gotham. He’s going to sever Alfred’s final tie… his father.

Batman makes his way to the helicopter just as it lands. The Black and Whites are bleeding out though. The Black Knight seriously injures Batman with two cuts to the chest. Briar tells Alfred over the coms that the current Knight was easy to mold, but is imperfect. With the Genesis Engine, he’ll be able to create the perfect Black Knight with Batman.

Back on the isles, as the pirates have a funeral service for Thatch, the wall explodes. And in Year One fashion, a shotgun wielding Alfred tells them that they are coming with him.

Analysis: I’ve enjoyed what Scott Snyder has been doing with this series. I’ve enjoyed this arc delving into Alfred’s past… but this issue was a mess. 1) Alfred is inconsistent at random times… we are told that he is this hardcore soldier who always gets the job done. But with the exception of Punk Rock Alfred, he always reverts back to the timid butler. He just feels too soft to do the things he is doing. 2) Why would you fight off Batman trying to save you?.. I know he felt like he was just dragging them both down, but come on. Batman has faced way worse than this, and Alfred comes across as extremely stupid here. Stop fighting it, you’re making it worse. And the thing that baffled me the most, 3) why would you, Scott Snyder, dedicate five pages of a twenty page comic to two people falling from the sky. The pacing problems from this moment alone — not even considered a scene, this is a moment — derail the rest of the book. If you want to create some drama in this moment by dragging it out for an emotional payoff, you need to at least incorporate another scene. Have them happen simultaneously, alternating back and forth between the two. Build that moment up.

Rafael Albuquerque keeps it up here for the most part. I felt like his storytelling was great, but his backgrounds in the current day story were nonexistent. It made the world feel a bit empty. Hopefully it’s because he has so much happening for the finale. I also liked the alternate future Batman design, as they used Albuquerque’s Black and White statue for inspiration… can Rafael do that story next?

Cris Peter colors in Jordie Bellaire’s place here. Peter had some big shoes to fill and she definitely holds it up on her end. Her use of magentas at night with yellows and greens during the day were a nice contrast. Her painting on the page with no regard to the lines added a raw feel but also added a great texture. Beautiful work from Cris. Steve Wands does some solid lettering here. Anyone wondering why I praise him so much should look at the opening page. It’s because of his font choice that you see that Gordon has a voice box. The subtle details lettering can do can make or break a comic, and Wands always holds his end up.

Final Thoughts: A very sloppy issue from this team overall — which was unexpected… hopefully they can regroup and stick the landing.