8 Other Times Batman Has Been Engaged 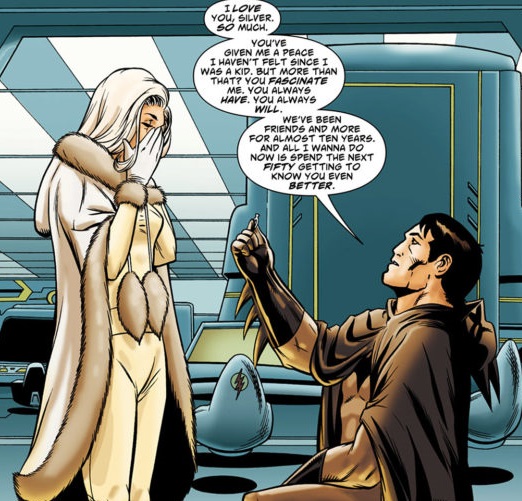 Now that Batman has proposed to Catwoman, I thought it would be fun to look at some times where Bruce has tried to take a trip down the aisle. For the purpose of this article, I’m only listing mainstream comics continuity. This means no Elseworlds, no movies and no Andrea Beaumont. While I’ve tried to make this list thorough, I’m sure I’ve missed a fiancee or two from Batman’s long history. Regardless, let’s take a look at Batman’s black book of ex-fiancees.

Why Was It Broken Off: Julie wanted Bruce to get a dang job

Julie Madison has a fascinating distinction in the Bat-books. She predates Robin, Alfred, the Joker and Catwoman! James Gordon and Hugo Strange are the only characters still around who predate her. She was introduced in Detective Comics #31 as Bruce Wayne’s fiancee. Since it was the Golden Age she served the “damsel in distress” role. When she wasn’t doing that, she was usually needling Bruce for not being more like Batman. Although the engagement lasted from Detective Comics  #31 through #49, she was very seldom seen and many stories went by without her being mentioned. She breaks off her engagement to Bruce because she thinks he’s lazy and needs to get a job. Obviously this was before Wayne Enterprises. Bruce doesn’t seem broken up about her breaking off the engagement. Julie later became the princess of a country. If you think I’m joking, look it up!

Why Was It Broken Off: Batman didn’t think this one through Years before her real name was revealed as Selina Kyle, a Golden Age Catwoman story had her using the name Elva Barr. While it’s been retconned as an alias, it was probably meant to be her real name. Regardless, Elva Barr meets Bruce Wayne at a beauty pageant and is smitten. When Catwoman is later caught during a heist, she tells Batman that she’s in love with Bruce Wayne and would reform for him. Batman lets her go and proceeds to do one of his oddest plans ever. As Bruce Wayne he becomes engaged to Elva Barr. What’s his end game? Who knows! He also forgets to tell his girlfriend Linda Page about it. Catwoman disguises as Linda and confronts Bruce, who reveals that he’s only doing it “as a favor for Batman”. If you’re ever caught cheating, just tell your spouse it’s a favor for Batman! Elva/Catwoman is rightfully pissed and returns to crime. Just how did Bruce think this would turn out?

Why Was It Broken Off: Vicki didn’t want to have plastic surgery This one is a bit crazy, but Batman and Vicki Vale fake an engagement to avoid an international incident. I wish I was making that up. When a gossip columnist decides to call their bluff, Vicki doesn’t care and the engagement becomes real much to Batman’s reluctance. Vicki is eventually told that as Batman’s wife she’ll need plastic surgery to disguise her face from his enemies. That’s enough to get her to call it off.

Why Was It Broken Off: Lois leaves Bruce at the altar because he’s not Superman Nobody really comes out looking their best in this one. Lois thinks Bruce Wayne is secretly Superman, so she romances him. She hopes this will finally be her ticket to marrying Superman. Clark and Bruce catch wind of this and troll her by having Superman show up at the wedding. Lois dumps Bruce. Bruce doesn’t seem too broken up as he and Superman privately have a good laugh behind Lois’s back. What about all those people who wasted their money on wedding gifts? Don’t Clark and Bruce have worlds to save?

Why Was It Broken Off: She found out her father was a killer, so she became a nun Rachel was introduced in a flashback story entitled “Batman: Year Two”, which (as the title suggests) takes place in the early days of Batman’s career. Rachel was on her way to becoming a nun, but Bruce convinced her otherwise. They became engaged, but once she found out her father had been the murderous Reaper she decided to become a nun anyway and atone for his sins.

When: Batman: The Widening Gyre #6

Why Was It Broken Off: It’s hard to have a wedding when your throat has been slit. Silver St. Cloud was a love interest from the Bronze Age who popped up again sporadically. In Kevin Smith’s “The Widening Gyre”, Bruce proposes to her and she accepts. That night he accuses her of being a killer robot and attacks her. She forgives him on the spot. That wasn’t even the weirdest thing about the comic (google “Batman bladder spasm”). The book ends in a cliffhanger as Batman is betrayed by a new ally who slits Silver’s neck on the final page of the story. The cliffhanger was written in 2010 and as of now (2017) it still hasn’t been resolved. We’ve had multiple continuity reboots and unreboots since then, so who knows?

When: Batman Incorporated #4 (retconning the events of Batman #153)

Why Was It Broken Off: Her spy superiors threatened her, so she broke it off and moved This one is odd. During the Silver Age, Kathy Kane/Batwoman is not aware that Bruce is Batman and every time she attempts affection Batman blushes and rebuffs her. In Batman Incorporated #4, Grant Morrison changes continuity. Now she was aware he was Batman and they were engaged at the time. It turns out she was a double agent, and her superiors don’t like how close she’s getting to Batman. After some threats she breaks off, and gives Bruce the excuse that she’s too old for dress up and doesn’t want “Batbabies”.

Why Was It Broken Off: Bruce regained his memories as Batman, but lost those of his relationship with Julie It’s interesting that Julie Madison begins and ends this list. Superman started with Lois, and Batman had Julie. Julie was forgotten while Lois lives in. Sometimes I wonder if there is an alternate Earth where Lois Lane became a pop culture footnote while Julie Madison remained a prominent Batman character. Because of constant continuity changes, Julie is a bit different than the girl she was in the Golden Age. An amnesiac Bruce Wayne goes to work with her at a community center and romance blooms. Gotham is in trouble though, and Bruce needs to regain his “Batman memories” to save it. Doing so will cause him forget his time with Julie. She assists in the transformation, and the two part ways.

Will Catwoman say yes to the latest Bruce Wayne engagement? Can Bruce finally close the deal? I look forward to rest of Tom King’s Batman run to see where it all goes.