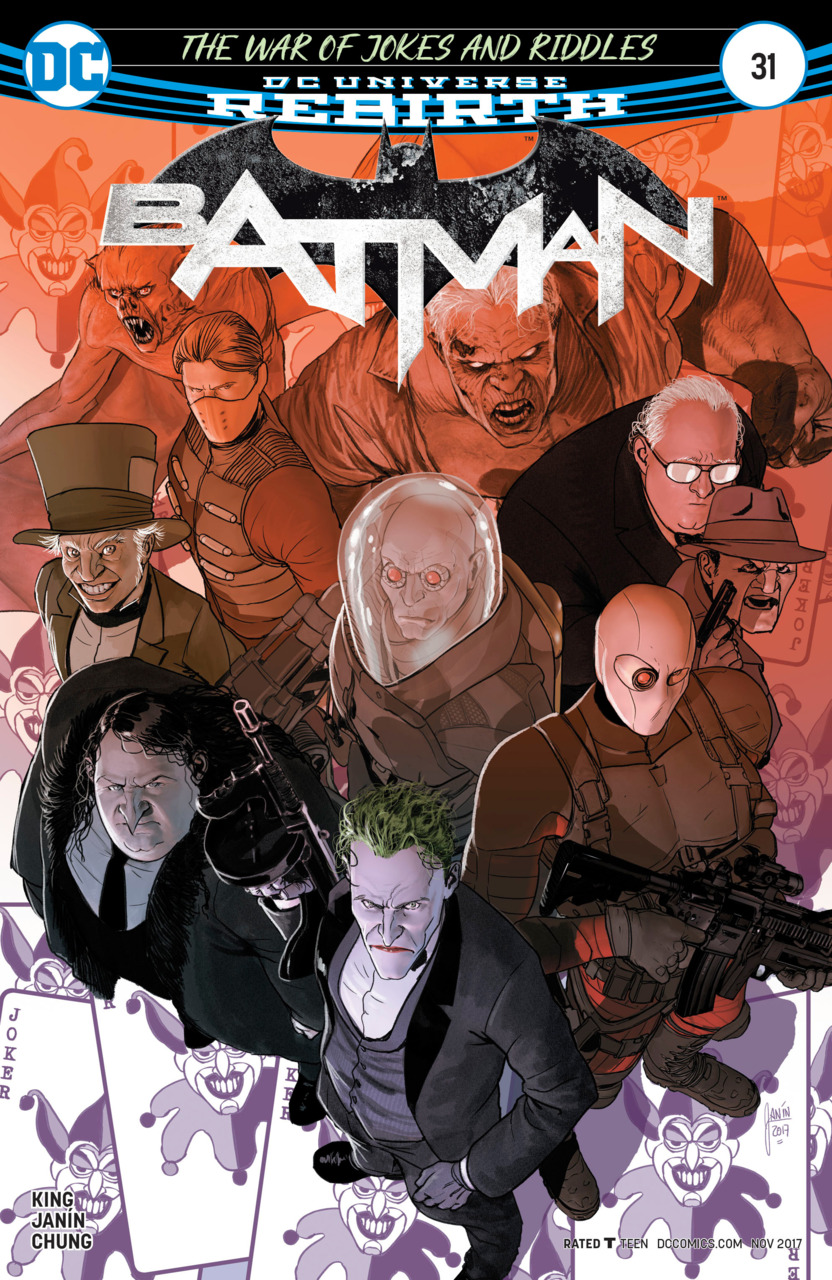 Overview:  The penultimate chapter of “The War of Jokes and Riddles” has a down, but not out Joker on the run from the team of Riddler and Batman.  As the events that have tied up the title for the past few months draw to a close, Catwoman reenters the fray and we get closer to finding out exactly what it is Batman regrets.

Synopsis (spoilers ahead):  Relieved of his cohorts, a solitary Joker returns to the office tower where the story began for the final showdown, along with him is an unnamed hostage who doesn’t live long. Kite Man is the one who puts the final nail in Joker’s side of the war as he reveals this location to Batman and Riddler.  Batman brings Catwoman in for reconnaissance, who after a brief meeting with Joker, where he attempts to shoot her off the building, reveals that the windows are not rigged with any sort of explosive.  This gives the Riddler’s team an entry point for confronting Joker, but not a means of getting the group through the air.  Enter Kite Man, who in a ridiculous turn of events, outfits Riddler’s team with kites enabling them to soar through the air and crash through the windows of the office Joker has held himself up in.

As we arrive at the end of the story, Riddler bests Joker in hand-to-hand combat before his team, naturally, turns on Batman next.  As he usually does, however, Batman has plans within plans and Kite Man activates a hidden feature of the kites the team wore, jet propelled inverse parachutes, which propel everyone with the exception of Batman, Riddler, Joker, and Kite Man back outside and up high into the atmosphere where Alfred will collect their unconscious forms in a bat-blimp.  Riddler turns on Kite Man for his betrayal, knocking him unconscious and apparently ending his part in this story.  That leaves the three of them as the only witnesses as to what occurs next, which we will finally learn in two weeks’ time.

Analysis:  Structure has been a concern of mine in previous story arcs in Tom King’s run on this title.  The story-telling has been uneven at times, which has resulted in more filler issues than I’d like.  I see these as missed opportunities for King.  In these slower issues that bridge the larger plot points I’d really like to have seen more of King’s creative side come out.  The dialogue here, while effective, is sparse, with even less narration.  King hasn’t been big on narrative storytelling, but I feel like it’s a missing part of his stories that would expand upon the existing bones of his story and firm up some of those structural issues.  Again, I reiterate that King’s stories have been enjoyable, but I don’t feel like they’re as good as they could be.  This doesn’t sit right with me as my respect for the man is deep.  His work on Marvel’s Vision and DC’s Omega Men and Mister Miracle has been some of the best production to come out of the Big Two in recent years.  I want him to succeed on this stage as well.

In regards to what does play out in this issue, I am for the most part pleased.  Kite Man, the unexpected MVP of this story, goes off on a fitting note, and everything else comes together nicely.  I do feel the removal of the Riddler’s team was a little abrupt.  An earlier issue centered around it taking five days for Batman to take down Deadshot and Deathstroke.  The rest of the villains seemingly go down much easier, which felt somewhat unbalanced to me.  Having almost an entire side of the war being removed from the board in mere moments seemed more akin to King really just wanting to get down to the actual story without having to tie up loose ends than anything else.  It was a creative exit, to be sure, but it didn’t feel true to the story, which was once about the terror that rained down upon Gotham in those days.

Janin’s art, as always, is on point.  He isn’t given much to do, but he makes the most out of the plot and takes through the story capably.  I would have like to have seen him get some more room to breathe and get creative.  This was a fairly by the books outing for Janin, who has shown a tremendous talent for visually drawing in readers.  That talent was not as obvious here.  To go with a baseball metaphor, they have a powerful arm in their rotation in Janin.  I’ve been critical of his experimentation in the past, where I’ve felt it added an undue level of business to the pages, such as in the aforementioned Deadshot vs. Deathstroke issue.  A slower issue like this, however, is the perfect chance for him to showcase what he’s got, like back in the I Am Suicide arc when he took us through Santa Prisca.

Final Thoughts:  While this chapter does feel more like a few pages stretched into an entire issue, I cannot deny that Tom King’s charm is present.  The dialogue is tight, and he accomplished exactly what he needed to and brought us right to the doorstep of the conclusion in preparation for the closing chapter.  I’m anxious to see how things close, as Tom King is really going to need to stick the landing for me to unequivocally call this story a success.