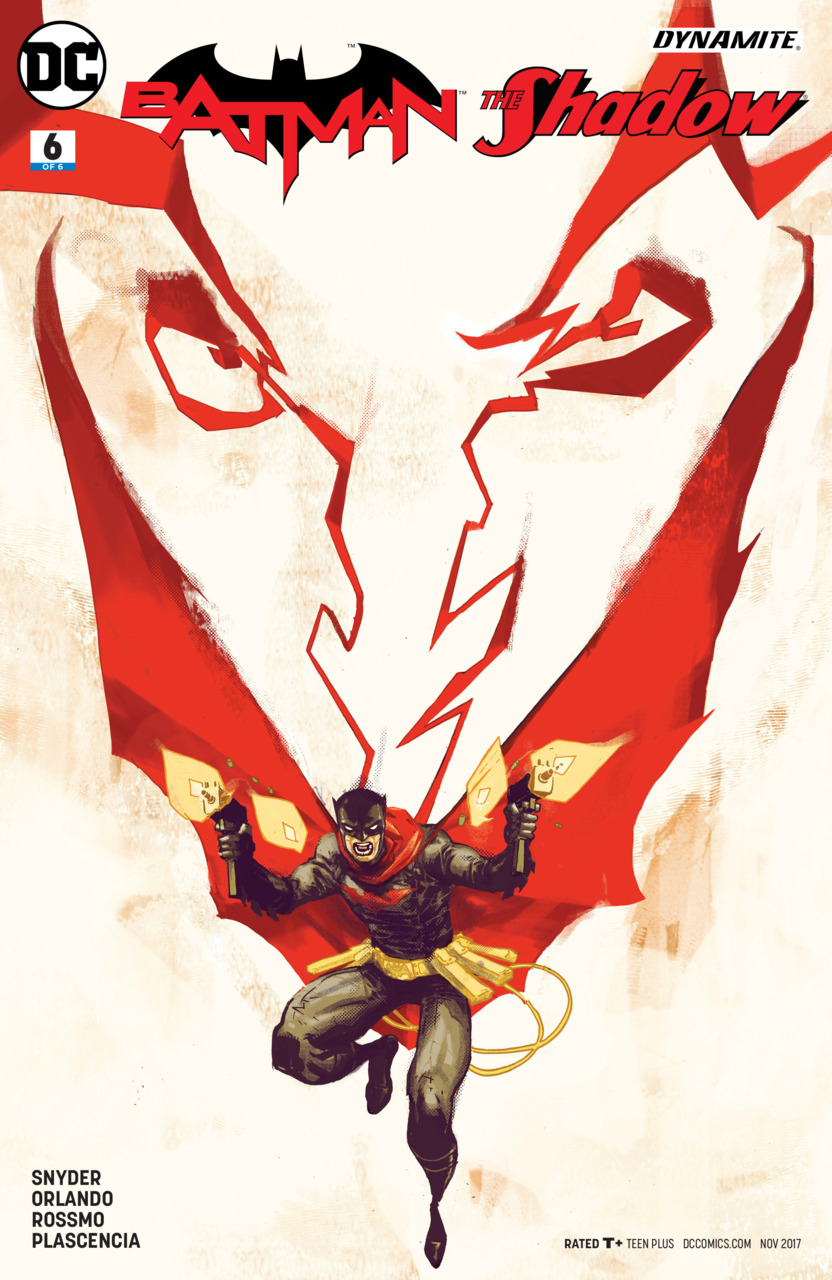 Overview: Batman must choose whether or not to become the next Shadow as they fight the Joker, the Stag and his army for the fate of Shamba-La.

Synopsis (spoilers ahead): Batman wakes up in Shamba-La to a group of creatures, the Teachers of Shamba-La, standing over him telling him that he is dead.  The creatures then explain that Shamba-La is a trap that lures in the worst of men and gives them the choice between redeeming themselves or death and that the Stag’s ancestor swore revenge on Shamba-La after his brother chose to die.

Meanwhile the Shadow fights off the Stag and his followers and the Joker.  Batman is offered the choice to either become the Shadow’s replacement and live forever or return to life as he is and to one day die.  Batman chooses to reject the offer of immortality and is sent back to join the Shadow in battle. Batman tries to convince the Shadow to destroy the “Ballast Torch”, which anchors Shamba-La to Earth, as the shock would defeat the Stag and his army.  The Shadow initially refuses, stating that to do so would mean that the Teachers of Shamba-La would no longer be able to lift his curse as the Shadow and asks for Batman to destroy the torch.  Batman refuses, saying that it isn’t his decision to make and the Shadow proceeds to destroy the torch, causing an explosion that knocks out the Joker, the Stag, and his army and causes Shamba-La to disappear.  Batman unmasks the Stag and the Shadow states that he has failed.

The story then cuts to the French Alps several weeks later where Batman and the Shadow meet for a final time.  Batman asks the Shadow to explain who he really is and the Shadow remains cryptic.  The two discuss whether or not their missions are a curse before parting ways as the series ends.

Analysis: This series comes to a close, with Steve Orlando again scripting from a story written by Orlando and Scott Snyder.  It’s a quick read that keeps the story moving as it ties things up and does a fairly good job of not straying too far into Scooby-Doo territory and having the story stop so the writer can explain to the reader what exactly was going on.

Batman interacting with the Teachers of Shamba-La is largely for exposition.  Let’s be honest, this story at least appears to be set within DC continuity, there is never any real danger of Batman accepting the Teacher’s offer and becoming the new Shadow.  It remains an efficient way to set up the climax of the story.  I also appreciate the otherworldly nature of the Teachers and its nice that the writers stayed away from the trope of the old wise man or woman that you’d normally expect to see in this sort of story.

The Shadow’s character gets a lot of fleshing out in this final issues.  I’ve described him in previous issues as being more of a force of nature then a character.  This issues pulls back the curtain a little to show a tortured man serving out what he feels is an eternal life sentence.  It makes me wonder if the Shadow is still an evil man forced into serving justice or if he’s someone looking to be redeemed.   It’s an interesting take on the character and one that I wish had been a bit more explored by the series as a whole.  The subplot of whether or not the Shadow has been secretly training Batman to eventually take over for him is left ambiguous, and as the story is set in present day and appears to be either in continuity or at least resembling Batman in his usual world, I understand the decision as that would be a big shift in Batman’s origin.  I thought it was a fascinating idea and I do wonder if they would have made this more clear if they had made this more clearly an “Elseworlds” story, with maybe having the setting of the story in the 1930’s.

The art by Riley Rossmo has been a standout for me of this series and continues to match the tone of both Batman and the Shadow’s world.  I especially appreciated the creature design of the Teachers of Shamba-La as it reminded me of something out of H.P. Lovecraft.

Final Thoughts: A satisfying conclusion to what has been the best Batman series I’ve read this year.  I’m looking forward to next month when Steve Orlando and Giovanni Timpano start Dynamite’s The Shadow/Batman mini-series.