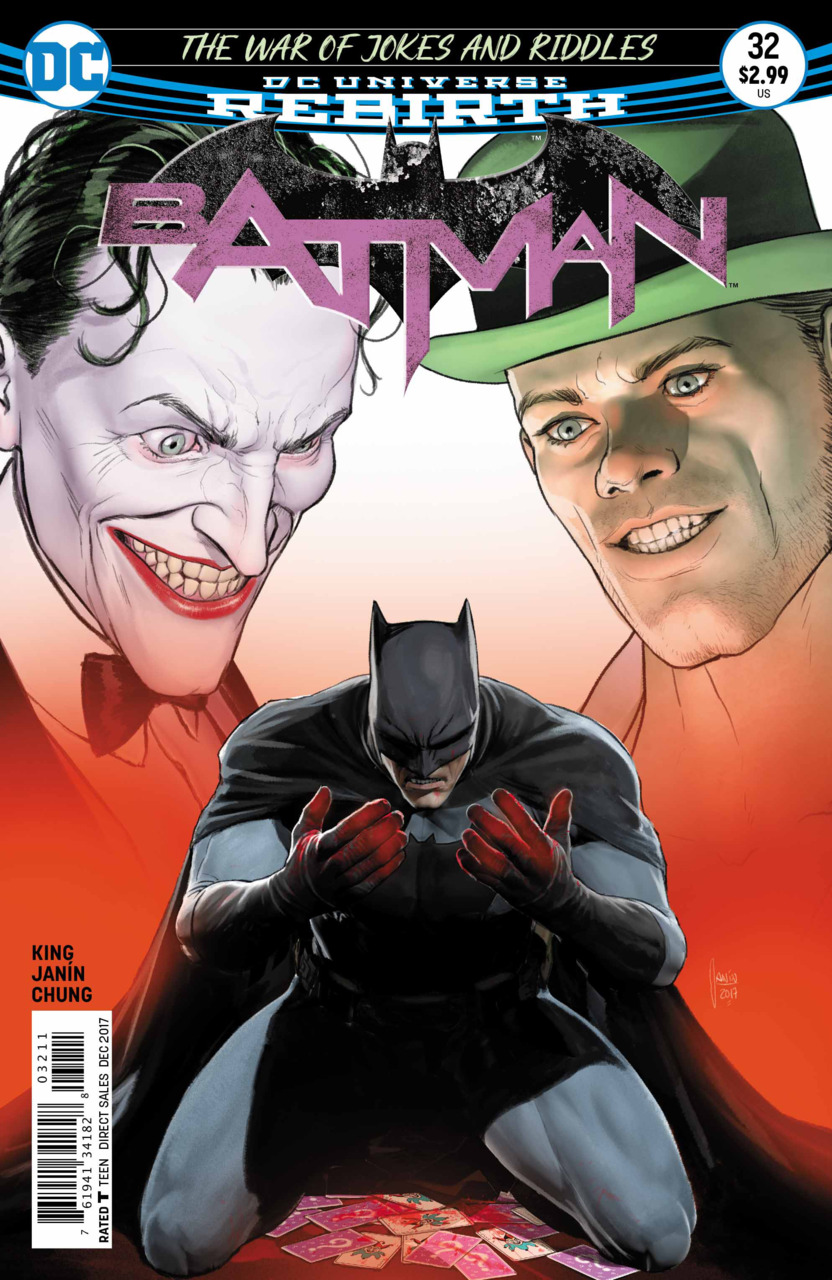 Overview: It’s been four months since the Batman world was stopped by Bruce Wayne’s proposal to Selina Kyle.  Before she could answer, though, he needed to get something off his chest.  Both of those stories come to a head in the pages of Batman #32.  It is time for the resolution to the past in the War of Jokes and Riddles and the resolution to the future of Bruce and Selina.  Get out the tissues, kids, this one’s going to be eventful.

Synopsis (spoilers ahead): The showdown begins as Joker and Riddler both rush Batman.  In a series of tight action sequences, Batman quickly dispatches Joker and turns his attention to Riddler, easily overpowering him.   Riddler quickly asks for mercy, seeing that he has been soundly defeated.  Moreover, he wants to know if Joker is laughing yet.  He proceeds to tell a somewhat confused Batman the true story of why the War was kicked off.  In reality, it had nothing to do with Batman.  Riddler likens Batman to a simple riddle one encounters as a child that they keep with them later in life as it is fun.  The real riddle in this situation is the laughless Joker.  He explains that everything was set up to have himself fall thanks to betrayal from Kite Man of all people.  Kite Man’s creation was all part of Riddler’s plan.  He built him up as a foil, laying the ground work with the death of his son which pushed him into the War.  It was all in hopes that the ridiculousness of the situation would strike a chord with Joker.  Unfortunately it does not and he remains morose.  However, Batman is deeply affected by Riddler’s story.

Now we get into the meat of the story.  Batman was there when Kite Man’s son died.  Knowing that the boy died as part of Riddler’s plan and what the true nature of the War was, Batman makes his move, which he describes to Selina as one intended to kill.  He thrusts a nearby knife directly at Riddler’s face, only for it to be stopped short as it is buried into the hand of Joker.  This, it seems, is just enough to bring Joker back to his senses.  There’s amidst the chaos of the end of the War, Joker finds his laughter again.  Batman explains that later on, he asked Joker why he prevented Riddler’s death.  Joker’s answer is that when Batman understands the difference between a Joke and Riddle he will know why.  Now that Batman’s awful truth is laid bare, he explains that in reality he is no different from his murderous rogues gallery.  He gave in to the frustration and attempted to break his code, which in his mind is equal to succeeding.  The only thing that kept him from crossing the line was in fact his enemy’s hand.  Selina takes this in and responds that the pair of them are both a product of their histories.  Good and bad.  She’s been involved with plenty that she isn’t proud and there is already more than enough pain and hurt in both of their lives.  She surmises that the answer to Joker’s question should simply be “who cares?”   With that in mind, she asks Bruce to repeat his request, which he does, as a question this time, not a statement.  And she says yes.

Analysis:  So there we have it.  The War is over and the questions have been answered.  There were several things I enjoyed about the final showdown between the three characters.  Firstly, for as much of a tough guy as Riddler came off as during this arc, he went down very easily.  To me, Riddler has always been the brains, not the brawn.  He’s the smartest man in the room and while he’s capable of getting a few punches in, he’s fairly easily overpowered physically.  This conclusion fell back in line with that characterization, which I appreciated.  He knew when he was beat and he pivoted the confrontation to the mental game he’s more comfortable with.  The reasoning behind Joker getting his laughter back also made enough sense for me to be happy with the ending.  Seeing Batman fall from his moral high ground jolted Joker back to himself.  I’m sure Batman’s actions will be the subject of numerous think pieces in the coming days.  It may not make sense with versions of Batman that other writers may portray, but it seems to make sense when we’re looking at King’s flawed take on the character.  This is a much more emotionally unstable version of the character, which we’ve already seen in the references to self-harm in previous chapters.  While Batman may have succeeded in getting Joker and Riddler behind bars, it is very difficult for me to call this a win for the good guys.  Gotham has been torn apart, and Batman crossed the line.  There’s no silver lining to this part of the story and we’re left with the War of Jokes and Riddles being a terribly dark chapter in Batman’s history.

So, the engagement.  I have hopes and I have fears.  Let’s start with the hopes.  I want to see this happen.  Batman has been without a solid status quo shuffle in ages.  I think the introduction of Damian was the last major shake-up.  There have been minor changes throughout the ensuing years, but nothing I really believe has been of consequence.  It’ll be good for the character.  However, I have no illusions about any marriage lasting long term.  It will eventually come to an end, but the interesting part will be how we get to that point, and who calls things off.  Neither of these characters are suited for settling down.  I think what I’m looking forward to the most is the conversation Batman has with each of his family members telling them.  I want an issue full of vignettes showing those scenes.  Especially Alfred’s.  The old boy deserves it.

Now, my fears.  Tom King has been pretty straightforward with his intentions to break down Batman, bit by bit.  He faced his own mortality to start off King’s run, and things have just built up from there.  Things reached a boiling point during the spring crossover event The Button where he met an alternate timeline version of his father, who encouraged him to give up this life.  It’s been an emotional journey, and we all know that there are no happy endings.  Will Selina wind up being another stepping stone to the deconstruction of Batman, or will she be that shining light that keeps him moving forward?  Only time will tell.

The true MVP of the War of Jokes and Riddles is superstar artist Mikel Janin.  In these pages he showcases the best of what he has to offer.  The action is brief but intense and he keeps everything flowing despite the confined nature of the setting he’s working with.  Three men fighting in an office could have been an artist’s nightmare, but Janin rose to the occasion.  While the remainder of the book is mainly talking heads, things stay captivating through very cinematic and moody panels with beautiful color palettes thanks to June Chung.

Final Thoughts:  There’s really not much else to say about this book that hasn’t already been covered in length.  The future looks interesting and I am every optimistic that Tom King will achieve something great with this book.  For now, I’ll leave you with this:  Was the War of Jokes and Riddles the best?  No.  Was it worthwhile?  Hell yeah.