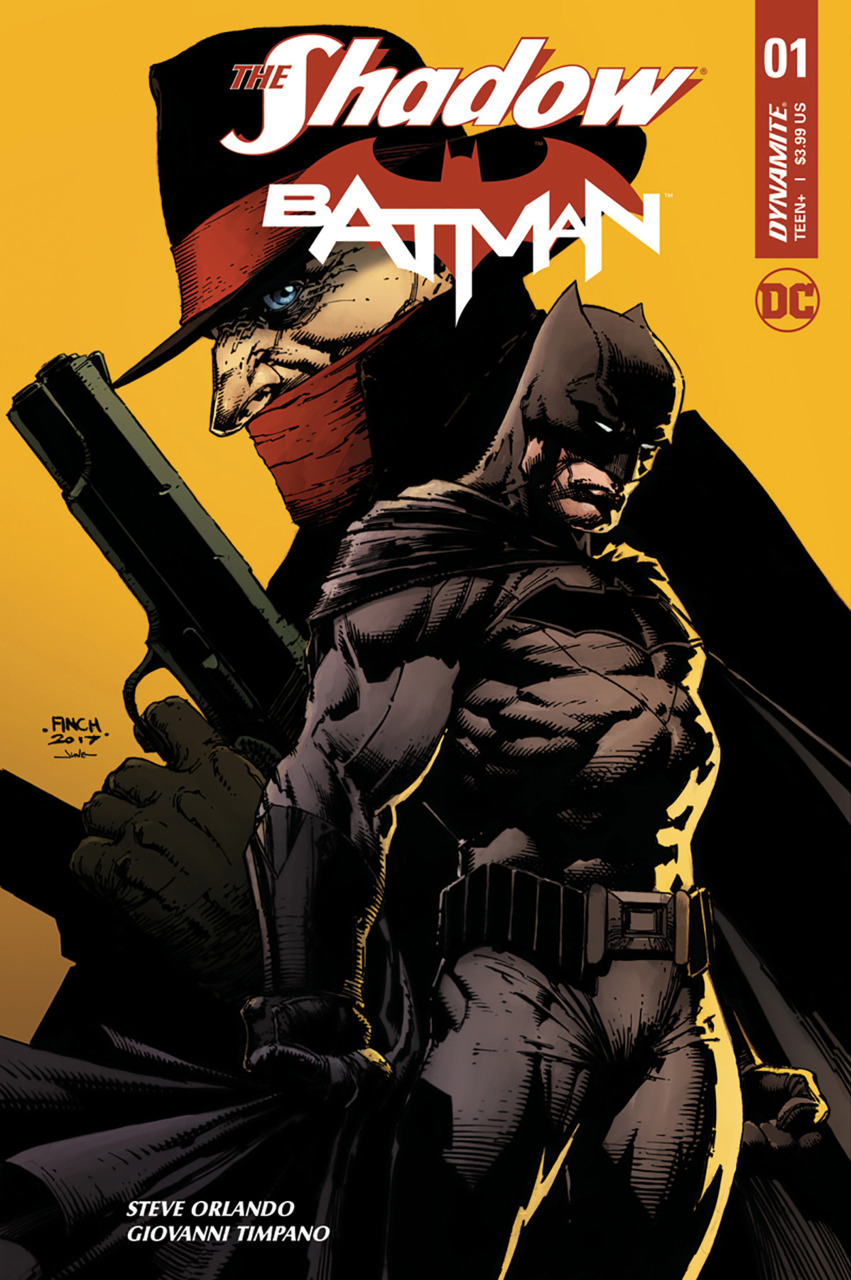 Overview: Batman, Robin, and The Shadow each begin to investigate a new threat, the Silent Seven.

Synopsis (spoilers ahead): The story opens in on New Year’s Eve in New York City with Professor Pyg and his Dollotrons attacking the crowd.  Pyg is interrupted and taken down by Batman and Robin.  Pyg rants about having rescued his Dollotrons from something called the Silent Seven.

The story then moves to East Egg, Long Island, New York where mourners are gathered around a grave.  As the crowd leaves, the shadow of a cloaked figure in a hat and the tail end of a long red scarf utters the name “Margo”.

The story then moves to a NYPD holding cell in New York where Pyg is behind bars, taunting his guards.  The police officers freeze in mid sentence as The Shadow appears in Pyg’s cell, demanding to know why Pyg is in New York.  The Shadow reads Pyg’s mind and reacts in horror at a face he sees inside Pyg’s mind, with Pyg explaining that whoever stole his Dollotrons left a message for The Shadow.

Meanwhile at Wayne Manor in Gotham City, Bruce Wayne thinks about how Damian’s life would be different if Bruce had been a father to him from the start.  Bruce then searches through archives in the Batcave looking for references for “the Silent Seven” and comes across a story from 1930 referencing a criminal organization that killed its leader, James Moriarty.

The story then moves to Robin’s hidden headquarters in New York where Damian is working when he is confronted by Batman, who speaks in curious black lettered dialogue.  Batman tells Robin that he’s out of his depth and an argument and then a fight ensues between the two.  Robin remarks that he notices the same movements in Batman as he did the Dollotrons and the story ends with Robin leaving Batman holding a Bat-Grenade, which explodes.

Steve Orlando gets the sole writing credit for this series, although to be fair I get the impression that the majority of the writing chores in the Batman/Shadow crossover were handled by Orlando as well.  This first issue is mostly set up, and is very Batman heavy, with the Shadow only appearing in a few pages.  I like the choice that Orlando makes to not rush to put Batman and the Shadow in the same room together and instead spends time setting up a new mystery.  I’m especially curious about the Silent Seven, given the name drop of James Moriarty, having some sort of connection to the world of Sherlock Holmes.  One of the fun things about Batman and the Shadow interacting is the fact that Batman’s creation was inspired by The Shadow, among other things.  Another early influence on the World’s Greatest Detective was Sherlock Holmes so to include at least a nod to that in this story is inspired.

On the Batman side of things there is a lot to love. Orlando continues to show that he has a great handle on Batman and his world.  I especially enjoyed the moment where Bruce is staring at what would have been Damian’s room had he been raised at Wayne Manor instead of by the League of Assassins.  Its an emotional moment that you don’t often see Batman having and it feels genuine.  One of my big gripes about the current state of Batman comics is that Batman and Robin don’t really interact much anymore, which is for me puzzling considering that they are father and son.  Orlando seems to be setting up exploring their strained relationship as a feature of this series, which is great as we aren’t really getting that anywhere else in the current comics.  As for the Batman that we see that confronts Damian at the end of the issue, I think that its fairly clear that this is some sort of impostor, but time will tell.

The Shadow isn’t giving a ton to do in this issue, at least on the surface of things (its entirely possible that the Batman at the end of the issue will end up being the Shadow in disguise).  I like the decision to open up at what looks to be Margo Lane’s funeral, which is a nice bitter sweet moment.  Orlando’s take on the Shadow is as a man who has lost much of his humanity and it’s nice to start the Shadow’s story off with a character moment.

The art in this story is fantastic, with Giovianni Timpano bringing a more European style to the book.  The art is stylized but still very detailed.  It brings to mind, especially in the Professor Pyg scenes, Frank Quitely.  I especially appreciated the use of heavy inks in the Shadow scene which added a lot of atmosphere to his interaction with Pyg.

Final Thoughts: This book is well thought out, compelling, and beautifully drawn and continues to maintain the very high bar that the Batman/The Shadow crossover set for this series to follow.  Books like this are the ones that keep me reading Batman every month.