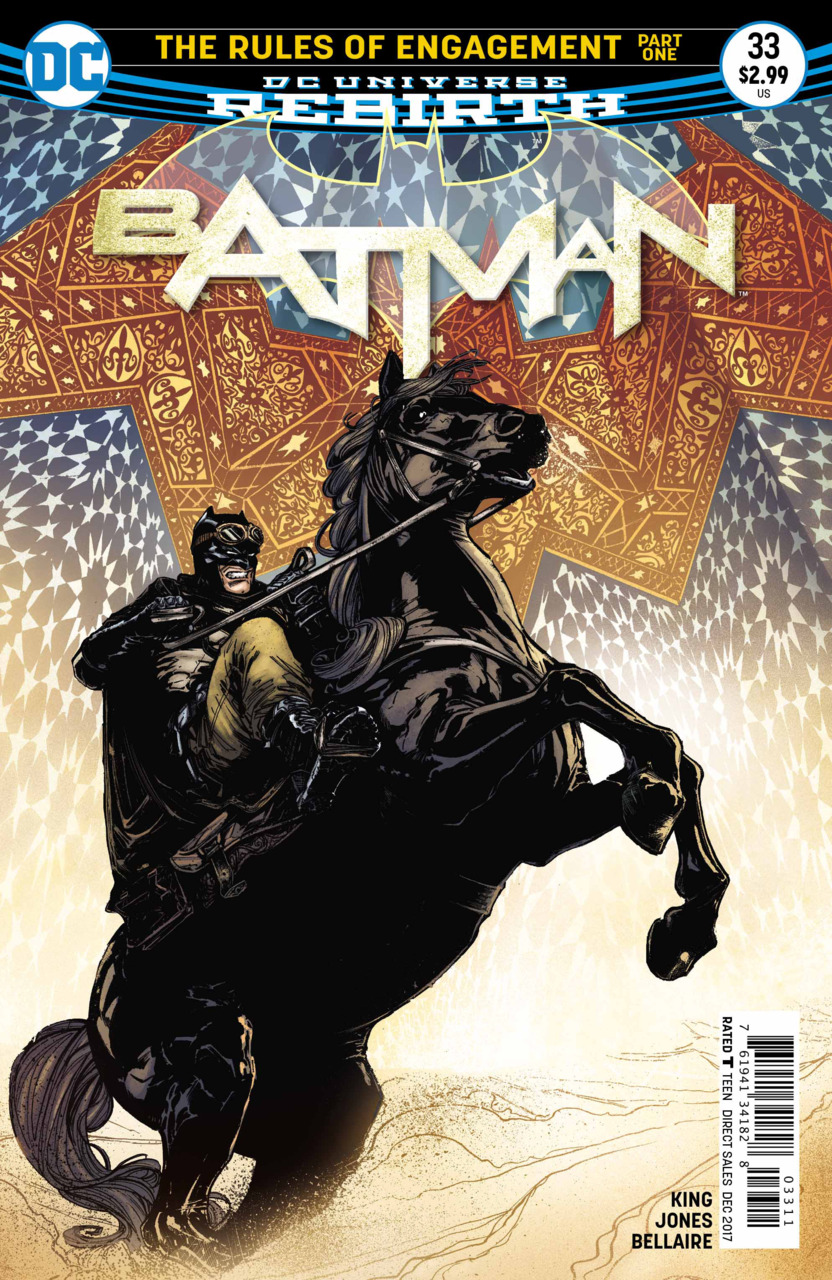 Overview:  She said yes.  The courtship has ended and the engagement has begun in the first installment of Rules of Engagement.  Now that Bat and Cat have slapped a label on their tumultuous relationship, it’s time to start spreading the good news.  I’m sure this will be a light-hearted romp, don’t you think?

Synopsis (spoilers ahead):  Dispelling any notions that this will be the aforementioned light-hearted romp, the story begins with the death of a horse.   As Batman (replete in an outfit that dredges up Batman v Superman: Dawn of Justice memories) and Catwoman make their way across the desert one of their horses succumbs to heat exhaustion and Catwoman puts it down.  The pair continue on their journey, eventually reaching Khadym and meeting with Tiger, of Grayson and Spyral fame.  He advises them that costumed hero folk are not welcome in the area, a mandate enforced by the Justice League themselves.  Nevertheless, he agrees to aid the pair in accessing a yet unknown location.

The trio heads towards a sufficiently mysterious looking door in a cliff, guarded by a fearsome warrior stationed there by the Justice League to prevent access.  Of course, money can get a man nearly anywhere, but the guard balks at the deal when he realizes the traveler is Batman.  Batman begrudgingly begins to dismount as he sees the next course of action will be the inevitable fisticuffs.  Catwoman, however, steps in and confronts the guard, who ridicules her as not being worth his time.  Catwoman deftly brandishes her trademark whip and an off-panel encounter occurs which leaves the guard prone.  As the trio make their way into the cave, Tiger again reiterates that this entire undertaking is a bad idea and forces, most likely his teammates, will be arriving to stop Batman.  Batman, however, is unconcerned with the impending arrival of the Justice League and calmly asks Tiger if he knows where they are headed and whether or not he expects them to make it out alive.

Meanwhile, back in Gotham, Alfred has amassed the past and current Robins at the Manor.  It is there, after sufficient banter, that he breaks the news to the group that Bruce Wayne has proposed to Selina Kyle and she has accepted.  Moreover, he explains that the pair have set off on an illegal, highly risky mission to Khadym for unknown reasons.  Alfred pauses the discussion as he takes a call from Superman inquiring why Batman hasn’t responded to the Justice League alert regarding an unauthorized incursion into Khadym.  Alfred proceeds to make an excuse that Batman is sidelined for the time being and assures Superman that Batman will be back soon.  The boys bicker about whose fault it is that Batman has been driven to these actions.  Dropping his calm exterior, Damian breaks down in tears and admits that it’s his fault and moreover he knows exactly why Batman has undertaken this mission, and who he is searching out.  His mother, Talia al Ghul.  Who sits in the cave and is informed of Batman’s arrival.

Analysis:  One of the things I was most looking forward to in this arc was Batman having the talk with the boys.  I was expecting individual reactions to vary from supportive to disgruntled and back again.  However, what I wasn’t expecting was Alfred to step in and steal the spotlight.  His going against Batman’s wishes and releasing the news is an interesting play on King’s part.  One might have though Alfred would be on the supportive side of the situation, but it seems that may not be the case.  I have to assume it’s because Alfred feels Batman is pursuing the relationship for the wrong reasons.  I have a feeling that the inevitable conversation between the two will be an emotional highpoint of the arc.  In regards to the boys themselves, I love the back and forth between them all.  The scene is very reminiscent of the restaurant scene from the opening chapter of I Am Bane, and captures the relationships between the characters quite well.   I am somewhat glad that King has kept the core characters of this book fairly tight, as it has given us these brief scenes that wouldn’t be as affective if the characters regularly appeared in the title.  All-in-all, the responses so far have been what I expected – wary.  It seems Batman is going to have some explaining to do when he returns from invading a Middle Eastern country, that is.

While the scenes setting up Batman and Catwoman’s arrival in Khadym were decent I felt they dragged on a little too long, especially the slow, overly dramatic opening.  The interplay between the two stories set in the desert and Gotham did a lot to pick up the pace and keep a fairly slow, intimate story engaging.  There are a number of confrontations set up by King in these pages in a very organic manner.  There is an ebb and flow to the story that makes the idea of these inevitable show-downs seem natural.  It’s one of King’s many talents and these smaller stories really showcase the care he puts into his writing.  There is one aspect of the dialogue in the issue that I’m not certain I one hundred percent approve of.  As they move forward on their journey in the desert Batman says “I love you.”  It seemed out of character, even considering that Batman is actively attempting to break the character he has made himself over the years.  One thing I can with certainty declare is that I’m still not a fan of the “Bat” and “Cat” nicknames the pair use with one another.  It falls well short of sweet, and is more irritating than anything else.

Joelle Jones explodes onto the scene in her mainstream DC debut.  I was a big fan of her work on Lady Killers and I honestly had no idea she was stepping in for this Batman arc.  It was a big surprises when I opened up the book.  I have to say she got a strange Batman chapter for her first outing.  The standard scenes one expects from a Batman book are largely absent in this installment, replaced by daytime in Gotham and the endless dry sands of the Middle East.  Jones handles both admirably and plays it safe with page structure.  There are a lot of details worked into her pages that really bring the images to life, even with the lack of motion throughout the issue.  Most characters were presented fairly well, but something didn’t sit well with me regarding Dick Grayson’s appearance.  A small gripe in an otherwise very solid debut on the title.

Final Thoughts:  I wasn’t sure what to expect out of this book, but I can say I’m definitely happy with the outcome.  The start was rocky, but this was a narrative win for the creative team.  A short, three issue arc will be a good palette cleanser after the lengthy War of Jokes and Riddles.  I’ve said before that Tom King excels in these quieter stories, so I’m looking forward to seeing what he can do, and I hope these next chapters maintain the intimate feeling of these pages.