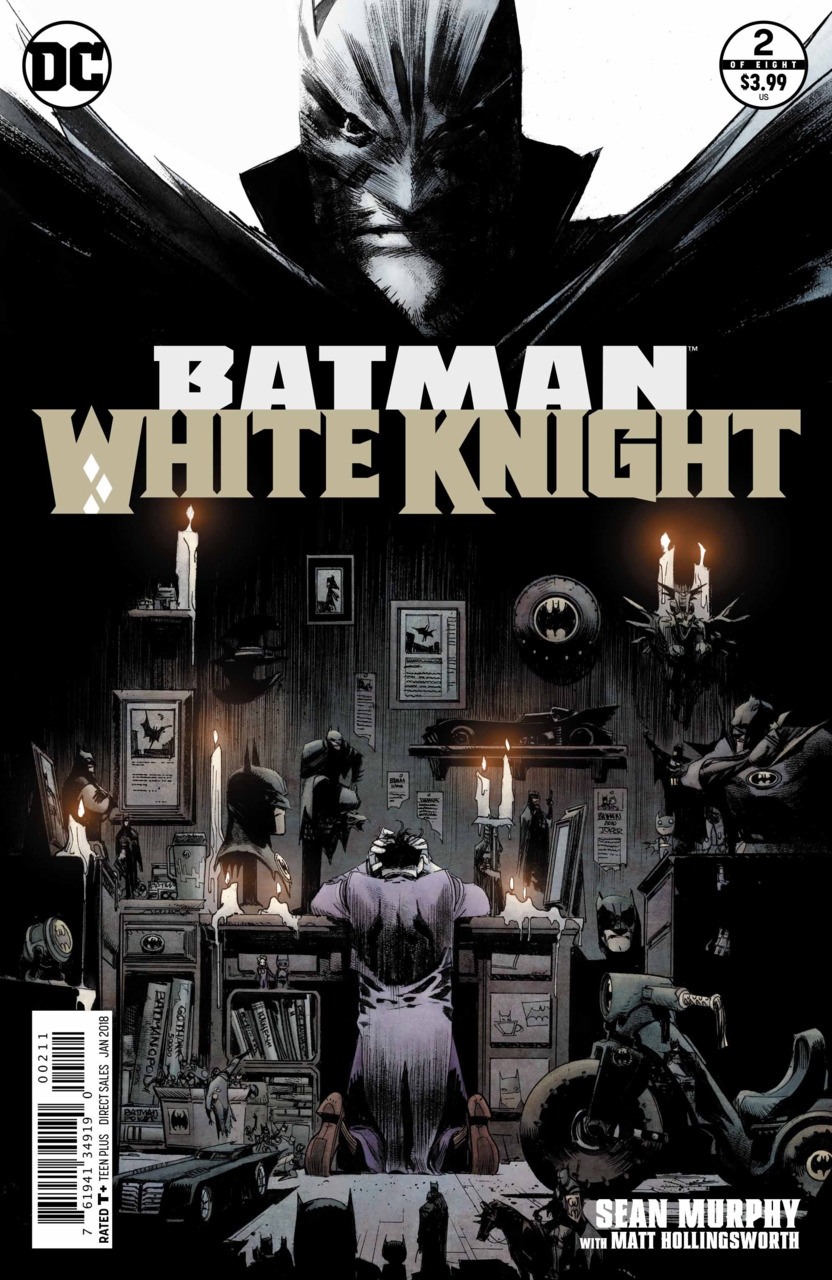 Overview: Jack Napier reunites with Harley and the Gotham Rogues Gallery. Bruce Wayne attends a party and continues working with Freeze to try and save Alfred.

Summary (spoilers ahead): Jack Napier delivers an impassioned defense at his high profile trial resulting in his release. While the media talk shows analyze what this means, Jack pays a visit to Zoinko’s Joke Shoppe to visit Harley. He tries to apologize to her for his past cruelty and propose to her, but Harley gets mad and says she wants the old Joker back. In the confusion, another Harley appears with two hyenas and she takes Jack away to her place.

Elsewhere, Bruce Wayne and Barbara are in the lab with Mr. Freeze conducting tests to see if they can reverse the freezing process and bring living organisms back from stasis. The test appears to be a success, so Freeze impulsively applies the process to himself. Unfortunately, the test does not account for rapid ageing and Victor emerges as an eighty year old man. For this reason, and the fact they don’t have a cure for Nora’s disease, Freeze appears to be resigned to the fact that Nora is beyond his reach.

Back at Harley’s place, she explains to Jack that, unbeknownst to the Joker, she left and an entirely new Harley took her place. They have a discussion about their past and what went wrong in their relationship. Harley decided to leave when Joker attempted to kill Robin just to get Batman’s attention. Jack doesn’t remember what happened to Robin and his fate is a mystery that is unknown to everyone except the Joker. Jack and Harleen conclude that they need to save Gotham.

The story moves back to Bruce, where he shows up to an elaborate party in Timothy Dalton’s 007 Aston Martin Vantage Volante from “The Living Daylights” film. A brief discussion with a couple of people at the party about Joker and Batman leads to Bruce leaving after assaulting a man and his security guard.

At night, Jack and Harleen meet with a collection of Gotham “super villains”. Among those present are Poison Ivy, Bane, Two Face, Scarecrow, Penguin, Riddler, Killer Croc and The Ventriloquist. Jack reveals that he summoned them to have a drink for the purpose of enlisting their help in becoming a unifying force to take Gotham. The villains state that they would never go along with it and it’s revealed in a flashback that Jack has used the Mad Hatter’s tech to take control of Clayface. In doing so, Jack compelled Clayface to turn into a dust that he then used to spike the drinks of all the villains. By using the Hatter’s mind control tech and using Clayface as a conduit, Jack now controls the major “super villains” in Gotham.

Analysis: The second issue of White Knight focuses on setting up Jack’s post-criminal life and exploring his relationship with Harley. In my opinion, the way the public reacted to Jack’s trial bore a slight resemblance to the OJ Simpson case. Jack is able to garner lots of support in the public because he is able to frame his case in a way that speaks directly to issues that negatively impact people on a daily basis. His references to the coercive power of the state in turning crime into a business really resonate even if he is individually guilty of crimes. When this power is allied with vigilantism in the form of Batman, Jack’s arguments begin to sound even more persuasive. Again, Murphy expertly uses the story to show us how things might play out in our world today.

One of the bigger twists in this issue is the presence of two different Harleys. On Twitter, Murphy has commented on how he is unnerved by how Harley might be perceived by younger fans as well as how he would like to “evolve the Harley mythos”. This is in line with how DC has been depicting the Harley Quinn character in comic books in recent years. She has become a strong, independent character in her own right and is becoming more distant from the version of the character that was entirely dependent on Joker and a victim of his habitual abuse. The “real” (for lack of a better word) Harleen in White Knight is depicted as an assertive and intelligent character. Of course, she still has her struggles, but this interpretation of the character is not defined by the Joker or anything he did. The story she tells regarding what I can only assume is the Jason Todd Robin is one that’s worth keeping an eye on in the future. It’s very likely Robin’s mysterious disappearance could have some impact on the story in future issues.

This issue is rather light on Batman/Bruce Wayne material as it’s primarily focused on Jack Napier. However, we do get to see two important points as it pertains to Bruce. First, he’s clearly working very hard to find some way to cure Alfred or to at least find a feasible way to postpone his demise. Second, he’s being forced to confront the naivete of his war on crime. At the party with his fellow wealthy citizens, he seems rather shocked when one of the more obnoxious guests reveals that he’s making a fortune in real estate off Batman’s crusade. This revelation coupled with the assertion that Batman is the pitbull of the 1% is enough to get under his skin. He’s being confronted with the truth that his wealthy peers do not share the same values or goals as he does. The casual racism and disregard for the less fortunate spouted by his friend Pierce seems to disgust him. We will have to wait for subsequent issues to see if these events affect Bruce in any way beyond just the superficial level. Hopefully he can come to the conclusion that his efforts to eradicate crime need to be more nuanced than simply punching it in the face.

The art is stellar. That’s probably the most accurate and the most concise way to put it. Murphy continues to include subtle homages to different parts of The Batman Universe. Joker’s shrine to Batman is partially depicted in Harley’s story and there’s a more comprehensive view of it on the cover of the issue. I also really enjoy some of the more subtle touches like using the Joker’s silhouette as Jack’s shadow and signing “007 Dalton” on the license plate of the Aston Martin. The meeting of all the super villains gave Murphy a chance to offer a unique take on all their different looks. He successfully honors the classical look of these characters while seamlessly incorporating his own interpretation. Hollingsworth continues to do an excellent job with the colors. He keeps it simple, but he gives every panel and every character their own feel. Murphy’s Gotham in particular just wouldn’t feel as the same without Hollingsworth’s colors giving it that haunting and melancholy aesthetic. The blues on the Mr. Freeze and Nora splash page are another great example of this.

Final Thoughts: This was a great sequel to an amazing first issue last month. It doesn’t have quite the same level of complexity as the first issue, but that’s mainly because the issue needs to set up smaller details of the story. The second Harley showing up at the perfect time does seem a bit coincidental and the method Jack uses to control the super villains does stretch the imagination a bit. However, those are very small quibbles with an otherwise great story. A random observation I couldn’t fit in anywhere is that Barbara’s personality is so delightful. It’s a wonder some of that hasn’t rubbed off on Bruce. Also, in the wide panel featuring the villains sitting at the table, there’s a woman in the background wearing what look like goggles on her forehead. Could this be Catwoman?

In the next issue(s), I think it’s worth keeping an eye out for any mention of Robin and continuing to watch Jack to see how pure his motives really are. He seems to want to make positive change, but he’s willing to use questionable methods to achieve it. I guess this makes him no different from Batman in the end. Perhaps that’s the point he’s trying to make.