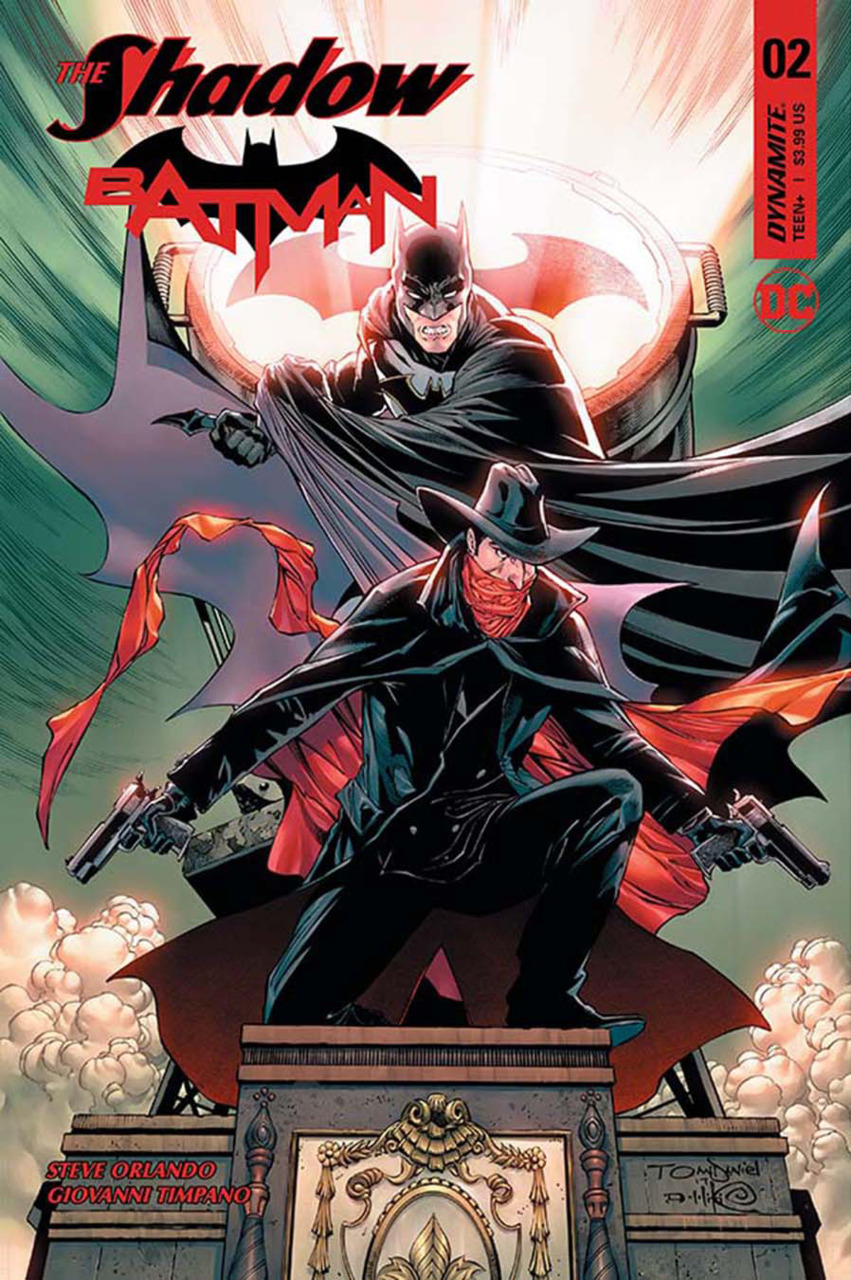 Overview: Batman and the Shadow team up again and the villains behind the Silent Seven are revealed.

Synopsis (spoilers ahead): The issue opens with at Robin’s hideout in New York where the impostor Batman who was blown up by Robin last issue continues to speak to Robin as a crowd of reanimated dead people being controlled by a single consciousness approaches Robin’s lair and attacks him.

Meanwhile at the Batcave, Batman is alerted to Robin’s fight by the surveillance camera Batman has installed in Robin’s hideout.  Batman sees that Robin is losing the fight but before he can act, the Shadow’s voice speaks to Batman as the Shadow appears in Robin’s lair and enters the fight.  Robin tosses another bat-grenade into the crowd as Robin and the Shadow leave the scene and join Batman back at the Batcave.  The Shadow explains that he has been following the Silent Seven, which led him to Robin.

The story then reveals that it is the Shadow villain Shiwan Khan and Ra’s al Ghul behind the Silent Seven and that Shiwan Khan is controlling an army of the dead.   Robin goes off to investigate, stating he will solve this mystery alone and storms off.  Batman and the Shadow argue which escalates until it comes to blows.  The fight ends with the Shadow admitting that he is morning the loss of Margo Lane.

The Shadow and Batman decide to work together to take down the Silent Seven and the issue ends with Bruce Wayne showing up with up Wayne Enterprises along with the Shadow in a new civilian identity, Allard Cranston.

Analysis: One of the advantages of having Steve Orlando write both the last miniseries and this one is there’s a good amount of connective tissue between both series.

In the last series, the Shadow was portrayed as an inhuman force for vengeance and seemed to humanize in the final issue of that series as he reunites with Margo Lane.  Orlando takes the seeds he’s planted in that story and expands on them, showing him as a man dealing with being locked into his mission as the Shadow forever thanks to the destruction of Shamba-La and morning the death of Margo, who seemed to be his only tie to humanity.  This leads him to take up Batman on his offer to show him that there is more to his mission than punishing the wicked and brings the Shadow into the literal light of day, with him adopting the new identity of “Allard Cranston”.  The name is a fun nod to the original pulp novels where the Shadow’s original identity is a former World War I pilot named Kent Allard, who adopted the name of “Lamont Cranston” among others in his war on crime.

The father and son dynamic of Batman and Robin continues to be explored in this issue, which is welcome as it doesn’t really get explored in any of the regular titles currently.  The book almost seems to acknowledge the lack of interaction between these characters, with Batman wanting to get closer to his son while Robin continues to bristle at what he perceives as a lack of trust.

The choice of Shiwan Khan as a villain in this story is appropriate and I appreciate that Orlando didn’t rush to put what is probably the Shadow’s greatest adversary in the first story.  Having the Shadow’s abilities along with the power to resurrect and control an army of the dead is an interesting threat and feels like a big enough problem to have the Shadow, Batman, and Robin have to deal with.  The addition of Ra’s al Ghul is also very fitting, but does feel a bit on the nose, as it is far from the first time we have seen Ra’s in this type of roll.

The art by Giovanni Timpano continues to impress.  I especially enjoy his take on the Shadow.  I think with a supernatural character like the Shadow, there is a natural inclination to make the character a little surreal, like giving him an impossibly long cape or scarf a la Todd McFarlane.  I don’t have a problem with this, in fact I quite enjoy an impossibly long cape on a character, but Timpano’s work highlights how the reverse can be just as visually interesting.  Timpano’s Shadow design has him wearing a black inverness coat that really more suggests a cloak then anything.  It makes the Shadow seem less otherworldly and in a story that seems to be about bringing the Shadow back to humanity, feels very fitting.

Final Thoughts: This is a quick and efficient issue that finishes setting up the story and moves things along well, while still fitting in some character moments. I can’t wait to see where things go next.