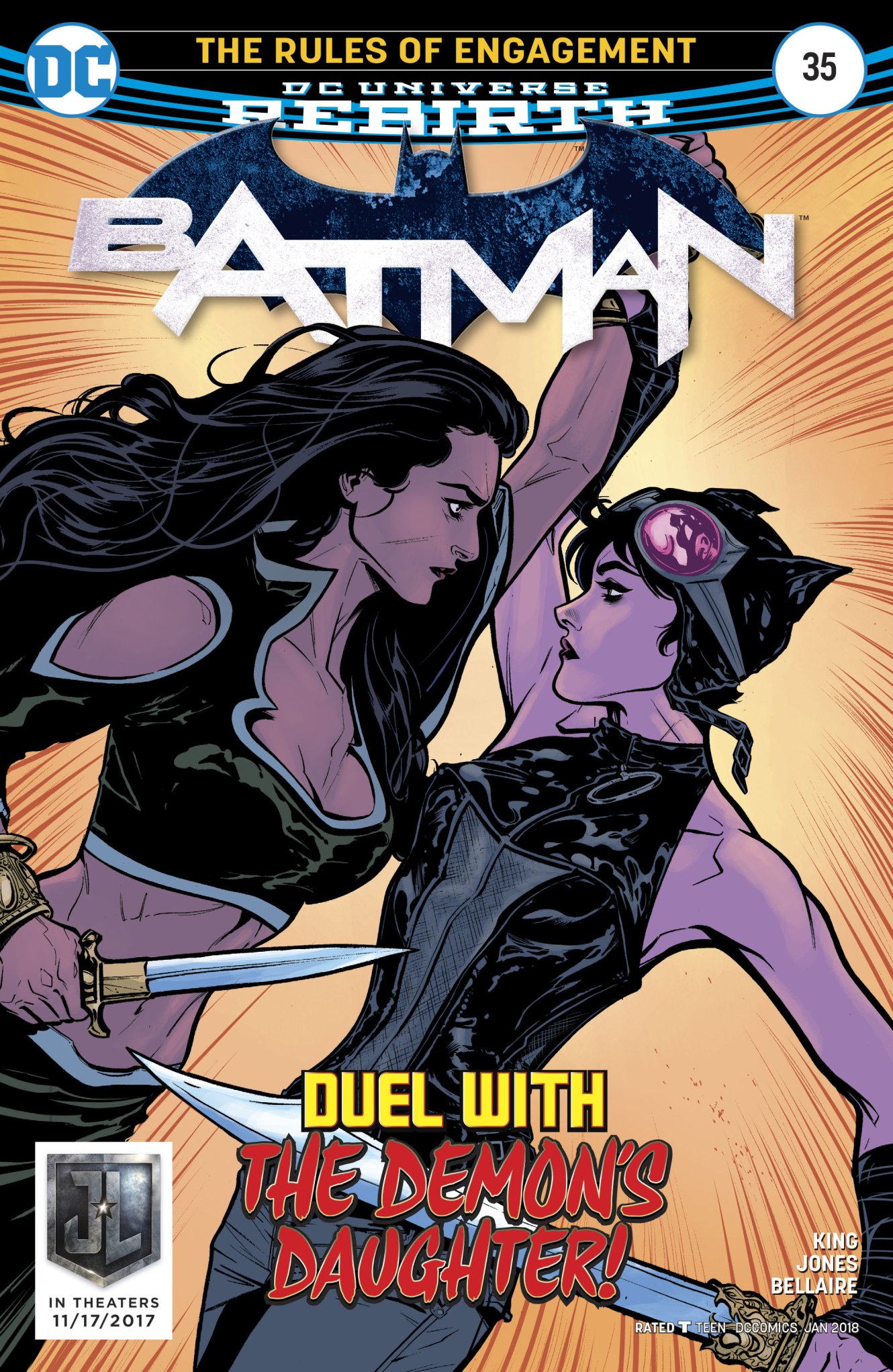 Overview: Batman has been sidelined in the pages of his own book and the women are taking center stage as Catwoman and Talia fight it out and Holly Robinson makes her reappearance.

Synopsis (spoilers ahead): Catwoman vs. Talia al Ghul may not be the fight we’ve been asking for, but it’s the fight we’re getting.  As the two loves of Batman’s life square off against one another, Talia gives Catwoman a little bit of her backstory.  She explains her violent upbringing, wherein her father taught her to fight at an early age, and began dying shortly thereafter.  The Lazarus Pit would bring her back to life and the cycle would continue, forging her into the woman she is today.  Catwoman responds with her own history, explaining that nothing was ever given to her and no knowledge was ever imparted upon her, yet here she is, holding her own against the Demon’s Daughter.  Outside the gates, Damian and Dick remain patiently waiting and discussing why they think Batman has proposed.  Damian, ever the emotional youth, proclaims that it doesn’t matter.  Batman will do as Batman does.

Back inside, the fight rages on and Talia questions Catwoman as to why she feels herself to be worthy of Batman’s affections as Talia still maintains she and “the Detective” are both the pinnacle of ability and belong together.  Catwoman, interestingly, flips the script and asks Talia why she thinks so highly of Batman, and lists his numerous shortcomings.  He has a one-track mind for a vow to fight crime that he made as a child.  A vow he will eventually betray everyone close to him to maintain, and it will always be first in his heart.  He is not the best, but he is the man she stupidly loves.  Outside Dick imparts his own thoughts on Damian.  Batman is not a selfish man, but he is not happy.  This is him making a grab for that elusive happiness that he has denied himself.

Talia eventually overpowers Catwoman in their fight and congratulates her for fighting well.  She even remarks she may kill her and revive her in the Lazarus Pit.  Catwoman, however, has a different plan.  With Talia’s sword staring her down, she grips the blade incapacitating her foe and closes the distance between them quickly and overpowers the surprised Talia.  Echoing last issue, she then buries the sword in Talia’s shoulder and makes her way to Holly Robinson.  A quick reminder from Holly catches us up on their story so far – Holly killed many, many people.  Catwoman took the fall and is now a fugitive.  This will not jive well with her intentions to marry Batman.  She explains to Holly that she would never make her go public with the truth, but she does ask for her help.  Meanwhile, Talia has acknowledged her defeat and exchanges cordial greetings with Batman and lets him know she likes his new betrothed.  The story ends with the engaged duo emerging alive from the gates and meeting Dick and Damian.  Damian asks his father if he is happy, and Batman says that he is getting there.

Analysis: Last issue I warmed up to after an incredibly sour first impression.  This issue is the exact opposite.  My first read-through I was pretty happy with the conclusion, but after a second go around I started to notice some of the cracks.  First off, I really expected Catwoman vs. Talia to end in a draw.  Instead, we got a Catwoman victory that felt somewhat hollow.  This fight was on Talia’s home turf and she is supposedly the most dangerous woman alive, but Catwoman, a relative novice to sword fighting not only stood her ground, but eventually overcame her?  I can see why it happened story-wise, but I don’t buy it.  Things could have played out differently while still achieving the same results and not needlessly subverting the reader’s expectations.  Catwoman and Talia are two strong female characters that could have really had a powerful clash, but King missed the mark and the opportunity.

My other gripe is the lack of any sort of conclusion to this story, beyond Talia giving her blessing in her own way.  There’s no resolution to the Holly Robinson plot as we are needlessly left hanging after Catwoman asked for her help.  I understand that King is working on a larger story here, but I prefer it when a story has an ending.  Everything doesn’t have to be tied up nicely with a bow and presented to me, but I like closure.  Small bits of closure help to develop momentum for a larger story like King is developing.  The story is still moving forward, I just don’t feel that momentum like I should.  That being said, King got a lot right here.  I still love his extended Bat-family.  Damian’s internalized struggle with trying to justify his father’s actions was pitch perfect.  Dick calling him out on it was even moreso.  I believe Dick hit the nail on the head and all of what is happening is Batman trying to achieve what he has always considered to be unachievable.  Happiness.  What I really look forward to is the eventual conflict that arises from the rest of the family who might take this as them not being bringing any happiness to Batman’s life.  There’s something brewing there, especially with Damian.

Final Thoughts: This was a fairly strong mini-arc, all things considered.  Tom King’s dialogue was on point, the story had a lot of heart, and the art was some of the best we’ve seen on the title since the Rebirth relaunch.  I need more Joelle Jones in my life.  She is ready for a monthly book, be it Bat-Family or elsewhere in the DC Universe.  Next up we have an arc featuring Superman and Batman’s relationship that has the opportunity to be really interesting and undoubtedly follow up on Batman’s violation of the League’s agreement that Batman flagrantly disregarded.  The dichotomy between the two characters can allow for some great moments.  Tom King has been his best when he’s focused on the moment at hand, and not building a larger overall narrative for the story.  So long as he focuses on that more moving forward, I expect great things.