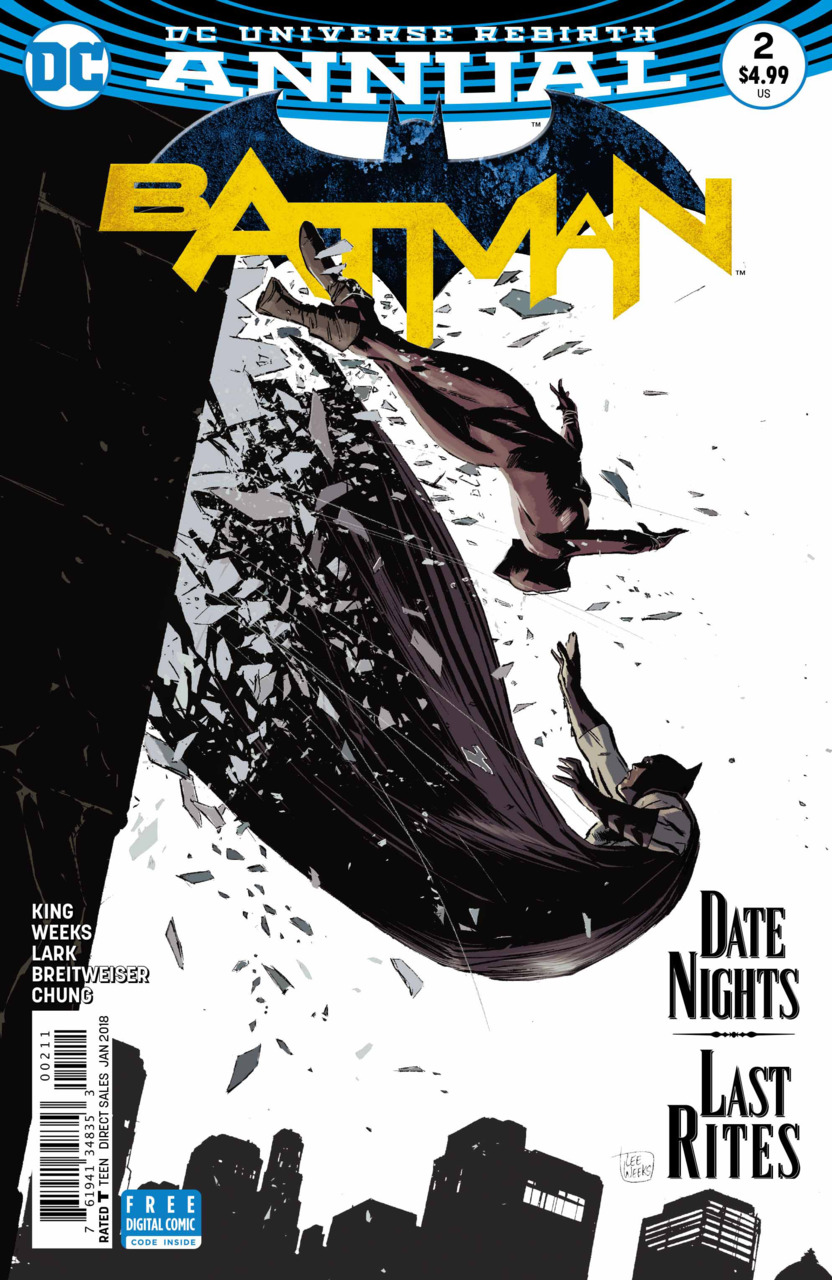 Overview: Last year’s Batman annual gave us a mixed bag of stories from a variety of creators, both past and present.  This year, we’re going full Tom King for the entire issue, with art from the incredible Lee Weeks (from the surprisingly entertaining Batman/Elmer Fudd) and support from Michael Lark.  Elizabeth Breitwiser and title regular June Chung round out the art duties with colors.  The story focuses entirely on the relationship between Batman and Catwoman in both their early days and a possible (?) future for the pair.

Synopsis (spoilers ahead):  The flashback portion of the issue starts with Catwoman doing what she does best – breaking and entering with a side of grand theft auto.  The auto in question, of course, is the Batmobile, which she winds up parking inside a bar.  After chasing down (and naming) his ride, Batman finds a mouse left in the seat by the thief.  Back at Wayne manor, the mouse has been kept as a pet and  Bruce Wayne reviews a riddle from recently incarcerated Edward Nygma while Alfred chastises him for not taking better care of himself.  Ever the detective, Bruce soon notices that his pencil is gone and jumps to the most logical explanation – Catwoman has arrived.  Of course, he is correct.  There is a quick chase scene as she informs him she just wanted to apologize for the car incident.  She has also already alerted the police, and he might want to avoid following her out the window if he wants to maintain his secret identity.  She quickly escapes again, but not before leaving another mouse.

Their game continues, as she makes subsequent visits to Wayne manor, leaving a mouse behind each time, much to Alfred’s chagrin.  The second visit she breaks through multiple security systems and finds the safe holding one of Martha Wayne’s pearls.  The pair share some back-and-forth about their namesake animals and their personal motivations before Catwoman sets off a smoke bomb and escapes.  The takeaway from this conversation is that Catwoman, also an orphan, knows more about Batman’s personal struggles than he realizes and the basis of deeper connection is formed.  She understands loss, and how moving on from loss and accepting loneliness can be harmful.  The third visit is the meatiest, where Batman confronts her on the rooftop and wants to know why she’s doing all of this.  She responds that she is helping to make him stronger.  That despite his vast training he is still a lonely rich boy who will never see the cat coming.  The mice she leaves are an analogy to how she sees him.  After eluding him in the woods, she returns to her apartment, only to be confronted by Batman who figured out her identity thanks to mouse excrement.  No one said being Batman was a glamorous job.  He initially put everything together sooner, but was unsure as to how to proceed.  After their recent conversations, however, he has realized his own personal feelings and that the two aren’t entirely dissimilar.  They kiss and argue about how they met, whether on the boat or the street (pre-Crisis vs. Frank Miller’s Year One) and we cut to the future, and the same argument.

The two are in a doctor’s office receiving bad news regarding Bruce’s health.  They are married and have been for some time.  Sadly, nothing can be done.  Their daughter Helena, now Batwoman, has reached out to the mystical element in Zatanna and found no options.  Bruce eventually does pass, surrounded by family and friends.  Selina goes to the Batcave and sits in the car, where the whole thing began years ago and finds his last gift to her – a kitten.

Analysis: That was a gut-punch of an issue I was not expecting.  Last year’s annual was more teasing future stories and light-hearted holiday fare, so the deeply personal story of the romantic beginnings to Batman and Catwoman’s relationship was unexpected, but incredibly well received.  I love what King has been doing with the two characters in his run on the title.  It’s dynamic, interesting, and I really hope it all gets to play out as he’s planned it.  The question I find myself coming back to after reading this story, is do I really feel like that’s how the story of Bruce Wayne eventually ends?  I’m torn.  I’d love for this to be the happy ending the characters deserve.  It’s a perfect best-case scenario.  However, I’m a realist.  Batman never gives up and he’ll go down fighting.  It’s a given.  Seeing this glimpse of the future, however, gives me hope.

By the time it’s over, I’m sure King’s run is going to be about many things.  But at its core I think it will be about this specific hope.  That there could possibly be a happy ending after enduring so much pain.  All the pieces are there and have been routinely mentioned throughout the key issues of King’s tenure.  The darkness of loneliness and the light of a possible happy ending.  Comics being what they are, we’ll never see those days come.  This character will be around long after I’m gone and still having the same adventures, just with a different creator’s spin.  But, just like in Geoff Johns’ swan-song in 2013’s Green Lantern #20, we get a glimpse of one of many possible futures.  One that I hope the characters see someday.  But, again, I’m a realist.

Lee Weeks was born to draw Batman.  He has a wonderful art style and his page layouts are nearly perfect.  This is a quiet issue with few action sequences, but each page was captivating thanks to Weeks’ interpretations of the characters and layouts.  Michael Lark’s brief flash-forward at the end was solid as well, but in much more of a “fundamentals” way as he showed a great technical capacity for drawing the repeated talking heads of characters with little room for any opportunities to show off stylistically, unlike in Weeks’ lion’s-share of the book.

Final Thoughts: Tom King knocked it out of the park on this one.  I’ve always said he’s better at the personal aspects of Batman than the superhero side of things, and he’s proven it yet again with a raw, emotional breakdown of the character.  This is easily the best we’ve seen him since earlier this year in the “Rooftops” arc, and I can’t recommend this annual enough.  The writing and art all around were top notch and this issue has more than earned a rare perfect mark from this reader.