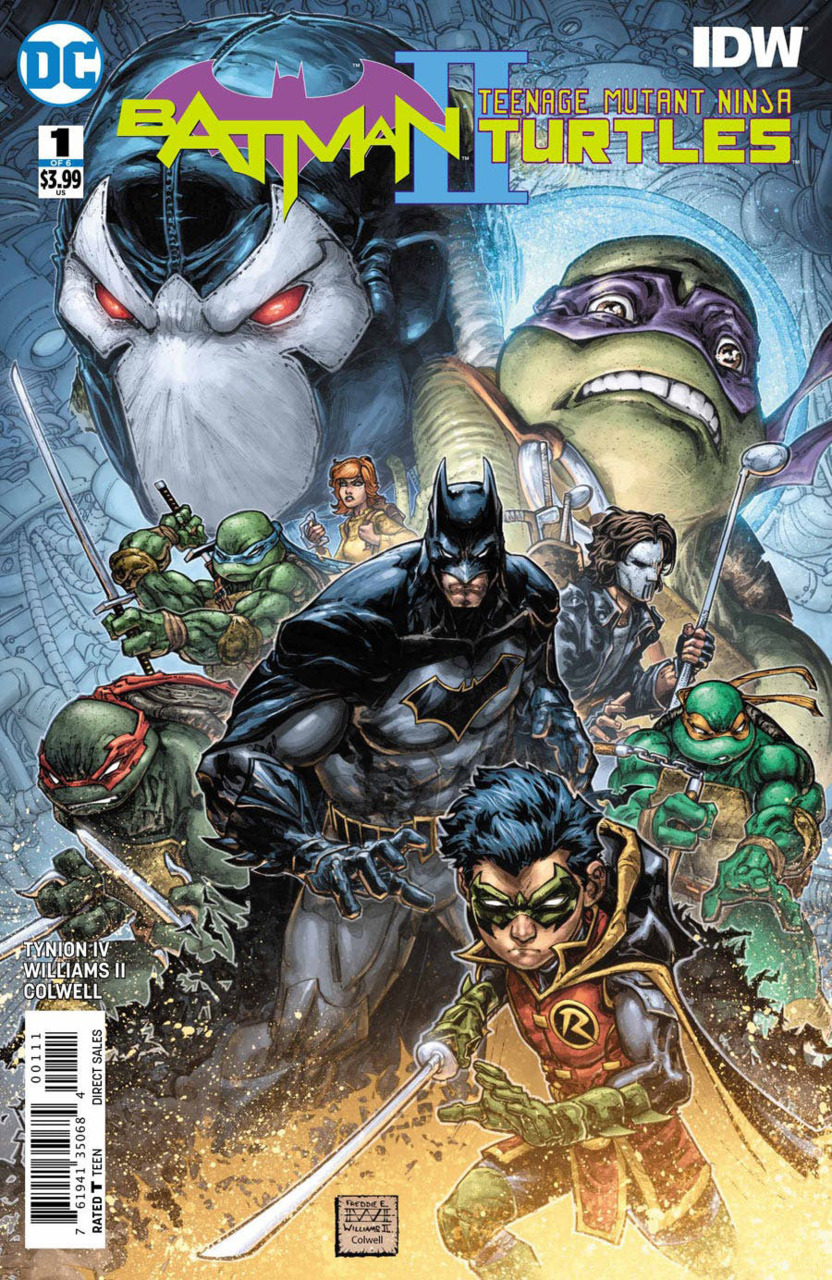 Overview: Batman and the Teenage Mutant Ninja Turtles deal with power struggles within the Foot Clan and League Of Assassins.

Synopsis (spoilers ahead): The story opens with in the New York Subway system with the  Turtles speeding on rocket propelled hover boards as the move toward a moving subway that has been split open like a tin can. Inside the car, the Shredder’s daughter, Karai, battles the Elite Guard, a group of ninja extremists that are trying to seize control of the Foot Clan in the wake of Shredder being taken down during the previous Batman/TMNT crossover.  The Turtles fight off the Elite Guard, who’s leader escapes after overpowering Donatello.

Meanwhile, on another Earth, Batman and Robin interrogate a League of Assassins member for information about a breakout at Arkham Asylum.  The assassin tells Batman that a faction of the League has freed someone from Arkham Asylum to replace Ra’s Al Ghul as their leader and that the League will be putting their new leader into a hidden Lazarus Pit under Gotham City.

Back in New York City, Donatello speaks with Splinter about feeling inadequate in battle and talks about how inspired he was by meeting Batman, someone who was both a genius and a master martial artist.

Back in Gotham, Batman and Robin go into the caves beneath Gotham to look for the Lazarus Pit and are attacked by a swarm of Ninja Man-Bats.  As they near the Pit, the League’s new leader, Bane, emerges from the Lazarus Pit.

While this is going on, in New York, Donatello uses alien tech to try to send a message to Batman to get some advice.   Donatello is attacked by the Elite Guard and the Alien tech is damaged and activates.  The issue ends with Donatello being transported to Gotham and Bane appearing in front of the Elite Guard in New York.

Analysis: The first issue of this miniseries picks up right where the last series from Tynion ended, and deals with the fallout of having the leaders of the Foot Clan and League of Assassins being defeated in the previous series.  Writer James Tynion IV plays with the notion that nature abhors a vacuum and in the defeat of their leaders, both organizations are embroiled in power struggles, with the heroes of both dimensions dealing with the collateral damage of these gang wars.  I like the decision made to make this a true sequel to the last series.  It also plays nicely into incorporating Bane as the big bad this time around.

Bane as a character for me always works best when they play up the master strategist obsessed with being in control of his own destiny.  Too often he’s portrayed as a steroid addicted wrecking ball and I appreciate that Tynion seems to understand that Bane is a more nuanced character than that.   Having Bane use a Lazarus Pit has yet to be explained, but it seems to me that the logical reason to have Bane use it is that its healing properties would be a great way to have Bane no longer need Venom.  I like the notion of a Bane that is at his peak physically without his Achilles’ Heel as it makes him all the more dangerous.  I also like that the story sets up a power struggle with having the Foot talking about needing a strong leader, but not having the Foot seek out Bane.  The idea of Bane being transported into a strange world accidentally and potentially deciding to take it over is both interesting and feels very true to what that character would do in that situation.

Donatello is the focus on the Turtles side of thing, with his feelings of inadequacy being the catalyst for the dimension hoping that sets up Bane landing in the Turtles’s New York.   I like the idea that Batman would have made an impression on him from their first meeting and the teenage Donatello feeling like he comes up short in comparison doesn’t feel like it comes out of no where.  I do also enjoy that now that it has been established in the last story that Batman and the Turtles know each other and that there is technology that allows them to travel between the two, that Tynion doesn’t waste time trying to over explain things and just moves ahead with a new adventure.

The art, handled by the returning Freddie Williams II provides the story with a nice sense of continuity from the last series.  I enjoy his cartoony yet detailed approach to art,  which seems to be a cross between Bruce Timm’s barrel chested character work and the detailed and slightly cartoony style of someone like Greg Capullo.  The splash page of the Turtles speeding down the tunnel and the sequence of Batman and Robin being attacked by Ninja Man-Bats are for me the stand-outs.   As a side note I think it’s great that Ninja Man-Bats have become a regular thing that the League of Assassins just has all the time.

Final Thoughts: It’s a fun read that sets up an interesting return to what was established in the previous series.  Grab some pizza and enjoy the ride.  That’s what I did.