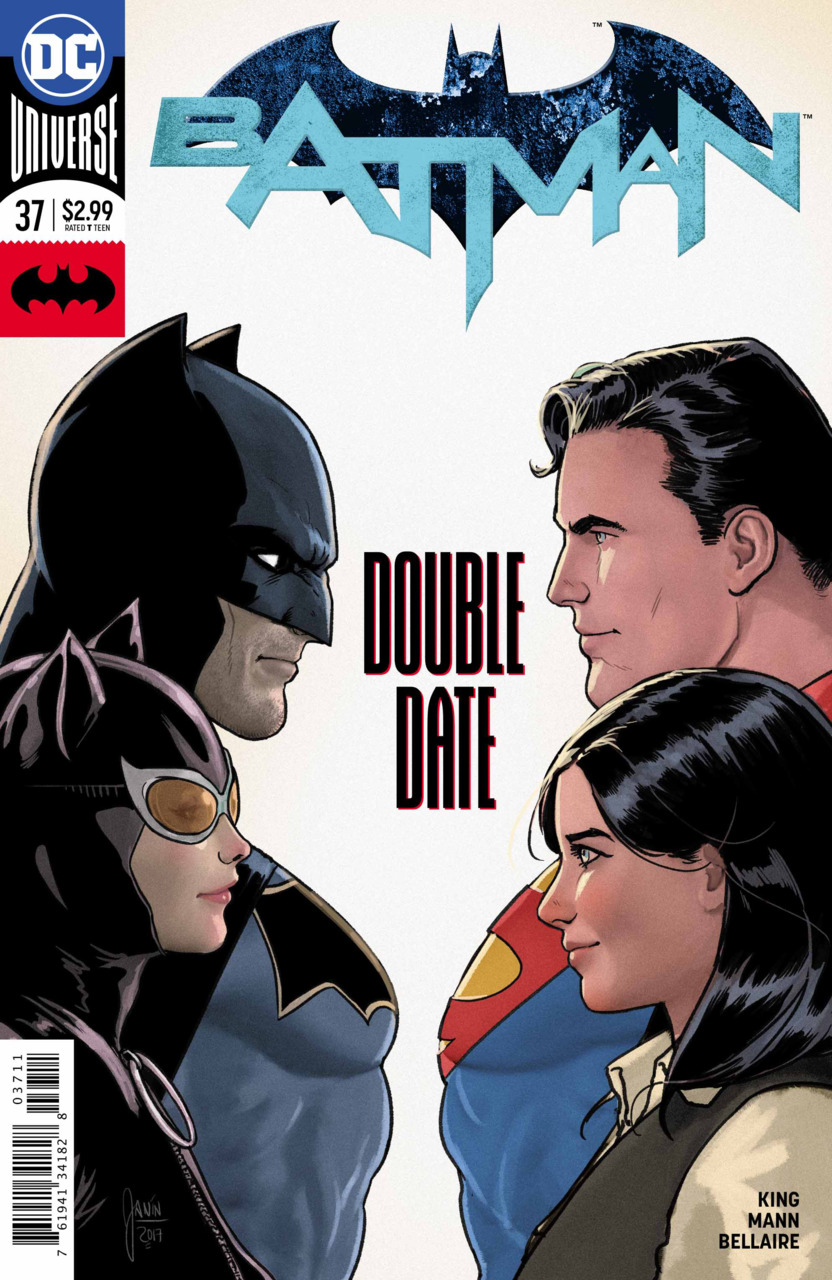 Overview: Now that the villains have been thwarted, Bruce Wayne and Selina Kyle find themselves faced with their next great challenge: a double date with Clark Kent and Lois Lane.

Synopsis (spoilers ahead): The group has decided on an evening at the carnival for their first official outing together, but it seems they have arrived on a superhero themed evening where admittance requires appropriate attire. Instead of moving on, they play along with a slight caveat – in order to ensure they aren’t recognized, everyone switches costumes. Bruce is now Superman, Clark becomes Batman, Lois dons the Catwoman costume, and Selina masquerades as an ace reporter. Hijinks ensue as the normal carnival experiences are enjoyed by most, and tolerated by Bruce. The conversations flow between the lighthearted and serious, the most notable a recurring bit about whether or not Batman could hit a baseball pitched by Superman and Lois and Selina sharing nips from a hidden flask .

The issue moves quickly and interplays conversations between the men and women as they get to know one another, and dance around the elephant in the room – Bruce’s engagement to a, for lack of a better term, criminal. Ever the straight arrow, Clark has concerns. Lois is a bit more of a free spirit than her husband and takes nothing at face value. In moments of brutal, raw honesty Bruce and Selina finally address their feelings to people other than each other, both explaining that the other is there to catch them. Neither had successful models for living their lives from their parents as Selina’s were long gone and Bruce’s memories of his parents are those of a child’s.

The evening closes when crime naturally rears its ugly head in the form of a purse snatched. The pair of heroes dispatch the man in quick order and say their goodbyes, bemoaning their lack of opportunity to put their baseball question to the test. They quickly change their minds decide the matter must be immediately resolved and switch back into their appropriate costumes. On a nearby baseball diamond, Batman defies the odds and makes contact as the story ends.

Analysis: Over the past year and a half, Tom King has dedicated the majority of his time on this title to the depiction of the titular hero, not his secret identity as Bruce Wayne. In reality, any fan worth their salt knows that Bruce Wayne is the costume and Batman is the real identity of the man, but normally Bruce is presented in a more lighthearted manor, somewhere between the spoiled playboy portrayed by Christian Bale and the somber maskless Batman King has given us. As part of the character development with the engagement of Bruce and Selina, I’m hoping we see a return to that lighter take on Bruce, especially if they plan on making everything official.

The strongest success of this chapter was King’s ability to turn a series of brief moments into a story without it feeling disjointed. Things could have been jerky, but there was a quiet ebb and flow to the conversations as they went from the significant to the mundane and back again that speaks to King’s talent. At the forefront of this issue is the relationship between Bruce and Clark the men, not the heroes. Even down to the competition for competition’s sake, they are people here, not the heroes we know them as, and it’s refreshing.

The art continues to impress with amazing work by Clay Mann, who was obviously having a great time with this story. The settings were all rich with detail, and the eagle eyed reader will have plenty of fun finding all the small things slipped into the art. Plus, I never knew how much I wanted to see Clark Kent dressed as Batman while still wearing his glasses. Those tiny moments and details really brought home the fun aspect of this chapter and showed Mann’s talent as a visual storyteller.

Final Thoughts: That’s it for 2017 and the main Batman title. We go out with Tom King showing us exactly how human superheroes can be with this quick, quiet two-part story. The work was wonderful across the board, even if King’s take on Superman was laying it on a little thick. I’m excited to see where the engagement goes from here and I’m hoping to see more of the extended family pop back up. I have heard of more than a few readers who have stepped away due to King’s uneven take on the book. I hope they give it another chance as I feel King has really been finding his swing the past few issues. I have good feelings about 2018 and what is to come.