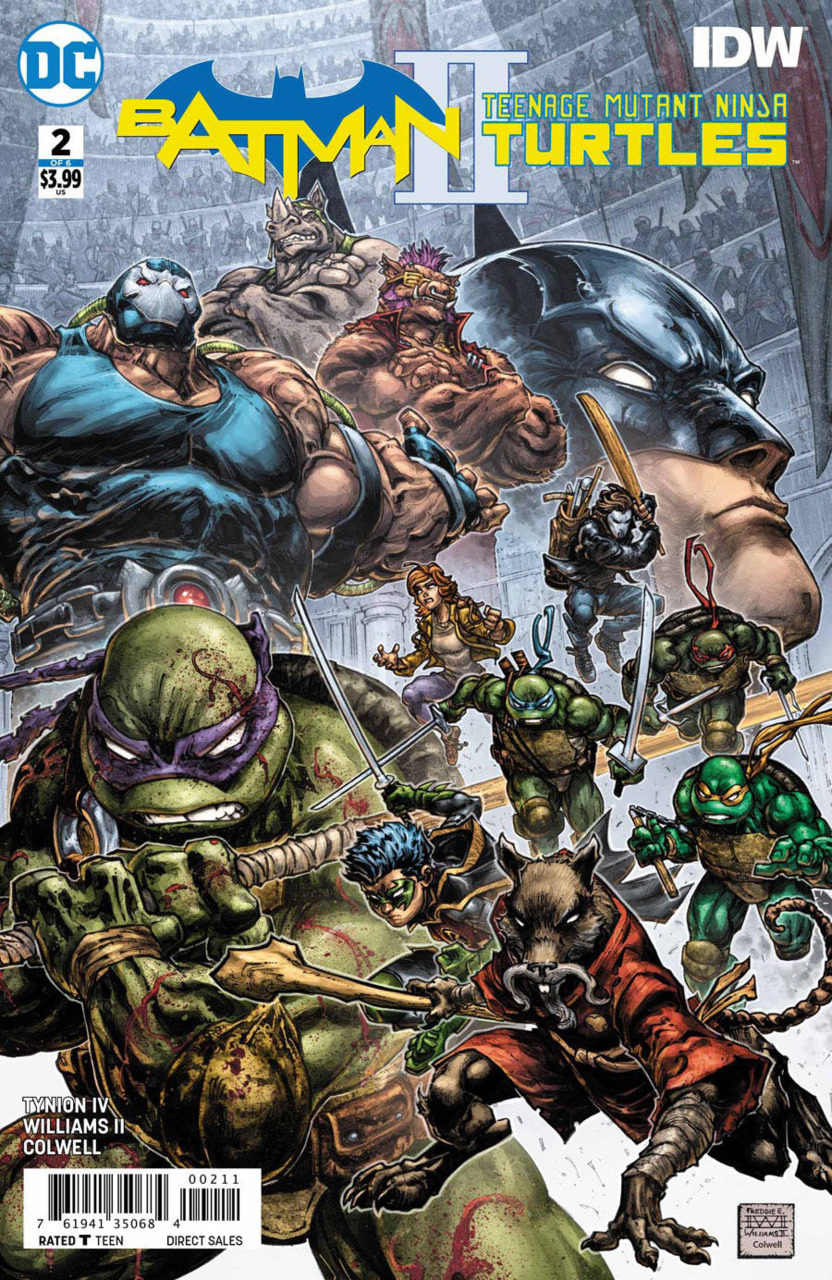 Overview: Batman and Robin travel to the Turtles’ New York City where Bane has seized control of the Foot Clan.

Synopsis (spoilers ahead): The issue opens with Batman confronting Ra’s Al Ghul about Bane travelling to the Teenage Mutant Ninja Turtles’ New York.  Ra’s provides Batman with a piece of tech that he needs to travel the Multiverse to the Turtles’ New York.  In the meantime, Robin and Donatello pursue a snowplow-driving Mr. Freeze on motorcycles, only to crash on the ice.  Donatello whips up a “Batsled” out of the crashed motorcycles and the two take down Mr. Freeze.

Batman, Robin, and Donatello travel to New York with the help of a machine built by Lucius Fox and Batgirl, leaving Batgirl in charge of Gotham City,  and upon, getting to New York, find the city in flames.  Meanwhile, Rocksteady and Bebop, having refused to accept Bane as the leader of the Foot Clan, find themselves confronted by Bane and they quickly bend the knee without a fight.

In the sewers, Leonardo and Raphael carry an injured Michelangelo into their lair after a battle with the Foot to find Batman, Robin and Donatello waiting for them.  Donnie goes on to admit that he is responsible for Bane’s arrival in New York.  Batman and the Turtles being to formulate a plan to take advantage of Bane’s addiction to the steroid compound, venom, which he will soon have used up.  The issue ends with Bane capturing Baxter Stockman and telling him to manufacture more, and states he plans on unleashing his venom on all of New York.

Analysis: This issue is mostly about moving the story forward after the set up of the previous issue.  There’s very little fat in this issue, and the story doesn’t try to drag out Batman and Robin traveling to New York.  Writer James Tynion IV continues to take advantage of the fact that this series is a sequel.  Let’s be honest, its much more fun to just get Batman and Robin to New York then to drag things out unnecessarily.

Donatello continues to be the focus of the Turtles’ side of this crossover, which is nice to see because Donnie’s always to me been a bit under-served and its nice to see him be a more driving force for the story and not be relegated to the Turtle’s tech support.  The scene with Donnie and Robin battling Mr. Freeze is a well executed way to showcase his skills with machines in whipping up an entirely new vehicle before Freeze is able to get away.

Bane continues to get a chance to shine in this series.  I love Tynion’s take on Bane, as a man obsessed with mastering his own destiny and the story makes good use to showcase that part of his personality.  Dropping Bane into a new world is the perfect challenge for this character and having him decided that it is his to conquer feels very appropriate for this character.  In my review of the previous issue, I wondered if Tynion was going to play with the notion of a Bane with all of his weaknesses removed which I still feel is an interesting idea.  Venom is, however, an integral part of what makes Bane…  um… Bane and its hard to argue with incorporating venom into the story.

Batman and Robin seem to be in a supporting role this time out, with the focus in the story focusing on Donatello’s character arch and Bane’s rise to power.  I do enjoy Batman being put in more of a mentor roll in this story and it ties into both Batman past as both a mentor, father figure and now father to the various Robins. I also like how he seems to have more in common with Splinter then he does with the Turtles.  Damian does his usual snarky thing in this issue, and while I enjoy Damian and his “the jerkstore called and they are fresh out of you” attitude, I do wonder if we will see anything new from this character interacting with the Turtles this time out.  Part of me can’t help but wonder, given his fondness of the character, what it would be like if Tim Drake had been incorporated into the story.

Also bonus points for throwing Batgirl into this issue if for no other reason than because I don’t think she interacts enough with the rest of the Bat-Family in the regular books.

I’m really digging Freddie Williams’ art in this series, and I feel that his cartoony yet detailed and kinetic style is perfect for a story featuring the mutants of the Turtles’ world and the more straightforward superheroes of Batman’s world.  I especially like his imposing take on Bane, especially in the final scene with Bane leaning over Baxter Stockman with biceps three times the size of Stockman’s head.