Review: Batman: Creature of the Night #2 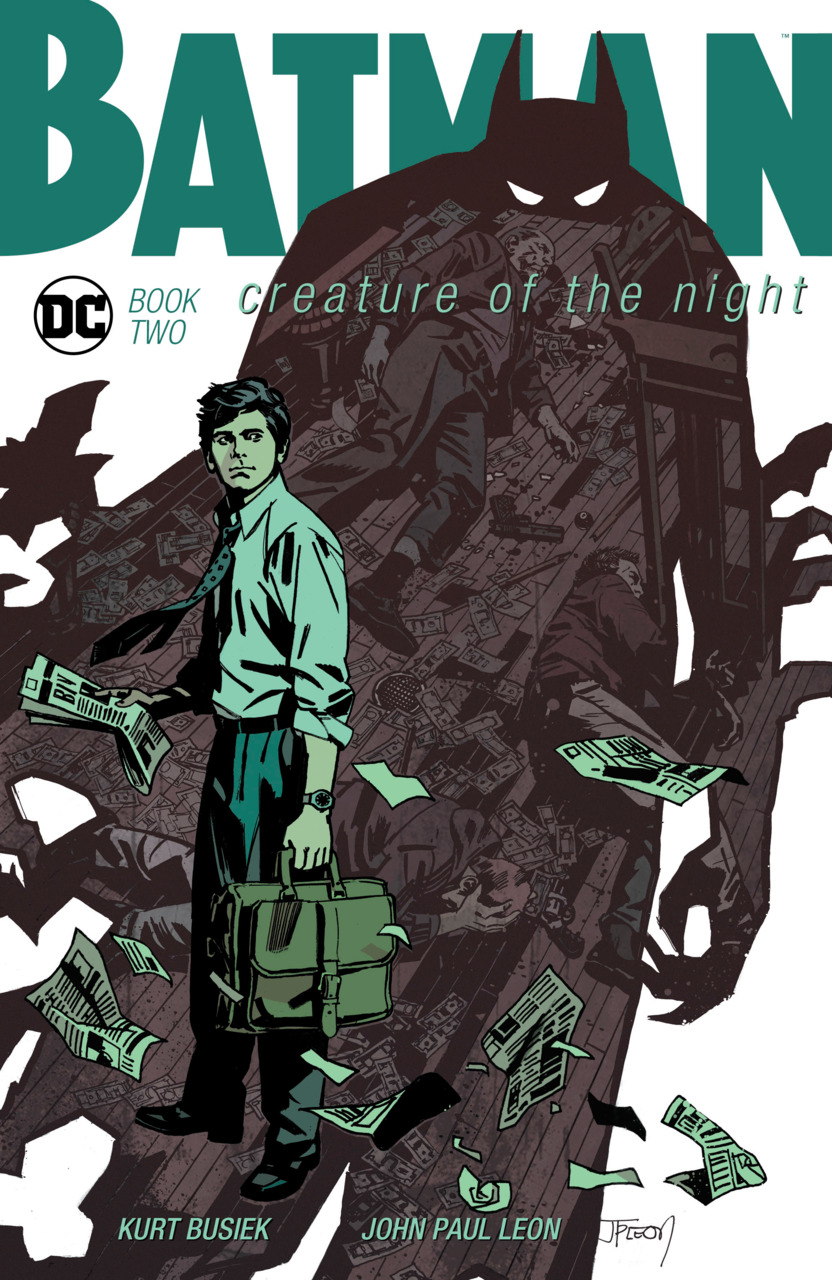 Overview: Now a young man, Bruce Wainwright has everything he could ever hope for, but the Batman still lurks in the dark corners of his mind.

Synopsis (spoilers ahead): The comic page opening this issue features Batman and Robin facing Boss Snooker and his gang, in a very Silver Age setting.

A Harvard student in the 70’s, Bruce Wainwright has become a comic collector with little to no time to read comics. He is now a rich entrepreneur who is rapidly taking the lead of his company, Wainwright Investments, funded by Alfred as a way to keep Bruce’s estate healthy. Bruce, as it turns out, has a good instinct for business, his investments usually paying off even when risky. He is also dear to all, a really sociable character. Yet, his connection to the Batman remains. Whenever the police seem to not be able to get a criminal, Bruce and the Batman come into action.

Over the years, Bruce developed the habit of checking all of the newspapers for any reports on their nightly activities. The major media outlets refrain from publishing anything, only a second-grade tabloid daring to report the appearances of the Boston Vampire. Bruce believes they refrain from calling it Batman due to copyright issues with DC Comics.

He holds regular rooftop meetings with the creature. The Batman asks him if he is safe, goes out into the night, and Bruce spends the night with their minds linked, prowling the streets. That is their ritual. Bruce keeps their connection a secret. He’s tried to share it with a few people before, but they always take it the wrong way.

Alfred senses that there is something wrong going on with Bruce, but prefers not to pry for privacy sake. Bruce repays by not prying into his uncle’s life, but, over the years, he has come to realize why Alton could not have taken him in when he was a kid. His uncle is gay, at a time when it was practically a crime to be homosexual. For him to attempt to raise a kid – worst, a boy – would be a scandal, almost impossible. So he did what he could.

Bruce graduates, and one day he comes to Alfred wanting to do “something extravagant and idealistic, just because I want to.” He wants to create a foundation dedicated to helping victims of crime. Alfred is against the idea first, says that there would be no end to it, but Bruce convinces him otherwise.

They start small, helping just one girl. Robin Helgeland, a 14-year-old girl whose parents were shot in an alley. He admits to himself that the name of the girl is what got him, but he keeps his distance from her. “Young guy, teenage girl, people would make it weird.” She is sent to the same school he attended when he was a kid. Bruce feels her pain, and he wants her not to feel alone.

This is, in his view, his way to help Batman making the city a better place, a chance of doing some good. This thought is also applied to his company. A young man, Martin, comes to Wainwright Investments with a project to develop modems. Despite his idea being well rounded and interesting, Martin has been having problems getting funded because he is a black man. Alfred is hesitant, he fears society’s prejudices might hurt business, but Bruce is adamant about it: he will not back down just because the world is not a fair place. He also seizes the moment to reveal to Alfred that he knows about his sexuality. And that he doesn’t care.

Time goes by, but his first Robin seems to be suffering the same way Bruce did. Reports from her school say she is isolated, withdrawn. Bruce decides to have Batman investigate the murder of her parents. Around the same time, a scandal breaks out involving his main competitor on the modem investment. He pays no mind, too focused on the Robin case. He is so obsessed he bribes Gordon to take a look at the case files. The files have nothing new, so he goes out of the precinct saying that the case “needs Batman.” Gordon gets suspicious and seems to not like the Bat being mentioned.

Batman goes deeper into the investigations, and finally solves the case, not without appealing to extreme violence while questioning non-suspects. The modem business also successfully launches, the company making a large profit because of the scandal involving their competitors. A party is thrown, and there Robin introduces herself to Bruce, thanking him for what he’s done. She is close to finishing high school and shows an interest in joining the charity wing of Wainwright Investments. By the end of the night, Bruce finds out is that the Batman has been going a little too far to keep him safe.

Analysis: Creature of the Night #2 is a beast thoroughly different in its nature than the first issue. From a psychological, character-driven drama with some horror undertones, we move to a biographical, factual telling of the early adult life of Bruce Wainwright. The Batman presence goes from looming and mysterious to physical and barely important to the tale being told, at least right until the very end. This time, Bruce is not looking through the eyes of the creature, but only acknowledging his existence. There is a catch though. This book is telling the story of Bruce Wainwright while also telling the story of Batman. Issue #1 covered the origins of the character, set in a tone much related to the pulp influences of Golden Age Batman. This now is the Silver Age, and the opening page is the clue Kurt Busiek slipped in.

Light-hearted, colorful, featuring a bon vivant Bruce. This can be said of both Silver Age Batman and Creature of the Night #2. Bruce Wainwright’s views on the world are steeped in absolutes, things are either fair or unfair, his justice is unquestionable and infallible, at least until he is faced with a moral conflict.

To depict such an idealist young man, Busiek chose the perfect time setting. His Bruce is a youth from the 70’s. Sexual Liberation is an underlining theme of the book as Bruce sleeps with several women, as well as the introduction of technology into our daily lives, beginning to show its head with the modem business. The 70’s youth was a generation of dreamers, of movers and shakers, of people with strong points of view on what is right. Thus Bruce Wainwright is not just a revival of the Silver Age, but also a product of his own fictional age.

In a way, this issue moves much faster than the previous one. His entire transition from college student into young adult gets covered and the storytelling involves some heavy narration. We are shown glimpses of his life, with the occasional fully enacted scene. If not for the constant variation provided by John Paul Leon, the story could have become slightly homogeneous in rhythm.

Despite his traditional square panels, Leon knows when and how to play with his own rules to keep the story going. His omissions are powerful tools, a breaking of the panel borders a meaningful gesture. The panel above takes us from a full scene back into narration, as Bruce walks away from the background and into the blank, undefined space of the page. Bruce is taking us from the specificity of an experience fully played to a tale being told.

Beyond his play with layouts, Leon adds a powerful yet discreet touch to this story: time frames. He colors the scenes with slight variations of light temperature so that we get scenes at multiple times of the day. This is mainly important for the office scenes, a repeated location that yet always seems different. We see Bruce and Alfred under the cold lights of the early hours of the day, the warm hues of an afternoon, the blueish tones of night.

The art alone is not enough to protect the Achilles Heel of this tale though: the fast-paced biographic style chosen for this issue left little space for character development. The conflict surrounding Bruce and Alfred on the first issue seems to be left on the past, even if we do get a confirmation that Alfred is queer. The lack of any conflict makes Bruce a borderline boring character all through the story, a problem redeemed in the last few pages. The most weakly developed character though is Robin.

For being such a central character to the Batman mythos, the introduction of Robin was extremely impersonal. She is turned into a charity case, with no emotional significance to Bruce at all. They might even become colleagues in the future, but to turn the Batman and Robin relationship to mere partners is an oversimplification. Even the clash between personalities, a trait inherent to the Dynamic Duo, is not there. In fact, Robin’s personality is not properly introduced in this issue, she only being a background plot point.

Final Thoughts: After being introduced to the reader with the Golden Age, Bruce Wainwright is taken through the Silver Age as he enters adulthood. As far as meta literature goes, Kurt Busiek and John Paul Leon excel at depicting the colorful, bright era of the Batman. Nevertheless, much like in real life, this take on the character becomes tiresome after a while. Busiek seems to be aware of that, adding well-needed conflict by the end of the issue that will hopefully guide Bruce to his Bronze Age.