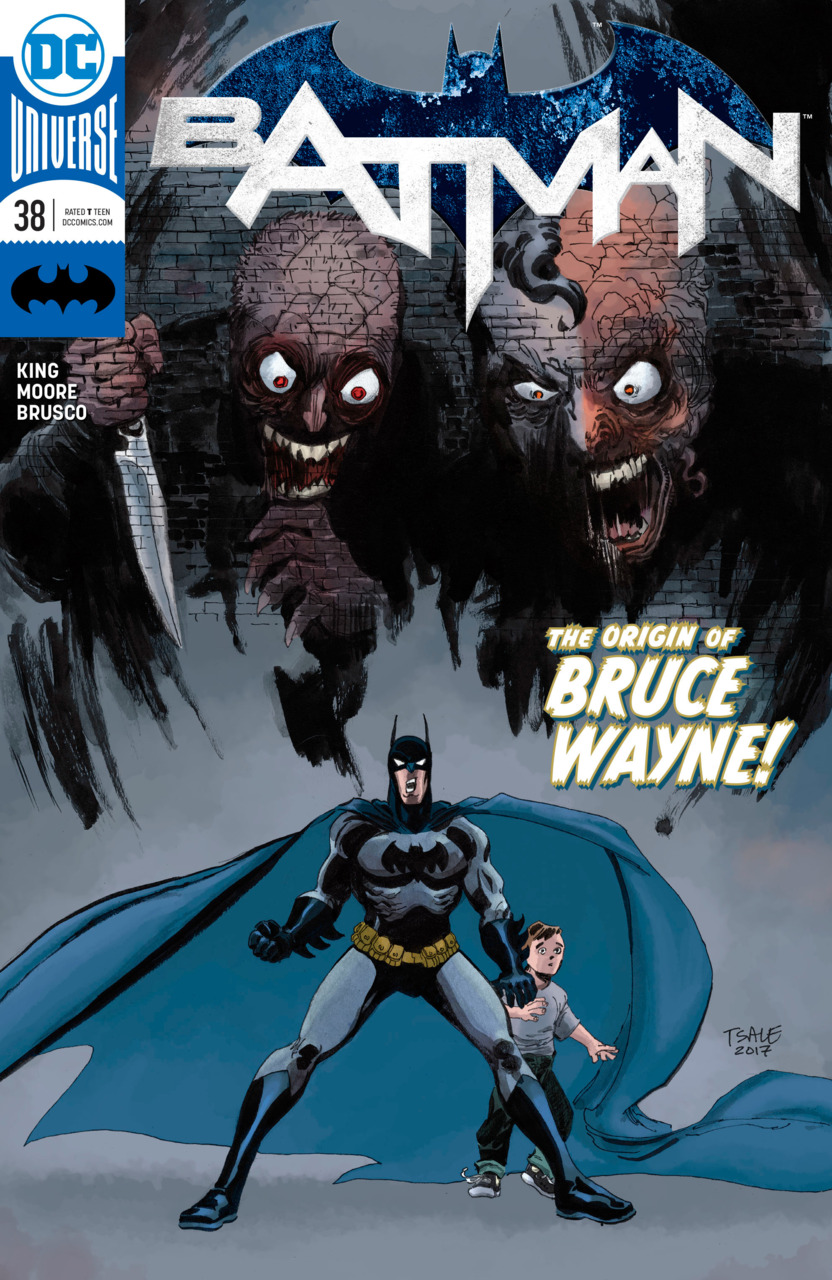 Overview: There’s been a lot of focus on the changing dynamics of Batman’s life the past few months. Character progression, growth, and change have all been central themes in these pages and have made the stories all the better. Now, however, we have a brief change and “The Origin of Bruce Wayne” takes a step back to focus on a more traditional take on the character – Batman, the Detective.

Synopsis (spoilers ahead): Bruce Wayne finds himself reliving the death of his own parents as he finds himself tapped to aide a young socialite boy whose parents were recently found murdered. Young Matthew himself seems to be infatuated with Bruce and their similar situations, lamenting that his late father also held a great deal of respect for the Waynes. When it comes to suspects, the evidence points to an incarcerated Victor Zsasz who coincidentally enough just gave himself two fresh tally marks on his arm to signify two more victims. This is seemingly impossible, however, as Zsasz was on camera at the time of the murders, which prompts Batman to investigate further, starting with the paper Zsasz used to cut himself. The paper at first glance is religious paraphernalia, but further examination reveals it to be a coded message, including an address and a vague threat.

Upon arriving at the address, Batman finds another crime scene with two more bodies. These new victims are apparently Zsasz’s parents, whose deaths Zsasz is indirectly responsible for due to his choice to life his life as a villain. Another clue is found at this scene, the victims’ arms are positioned like a clock face and the logical jump to Two Face’s involvement is made quickly. After further thought, however, Batman comes to the realization that just like Zsasz was framed, the evidence pointing to Two Face could be intentionally misleading as well. Following more clues he eventually finds the real killer, the initial victims’ butler, who admits to everything as the deaths of his employers put the family’s fortune into his own hands.

All’s well that ends well isn’t the name of the game, though, as Batman has one last thought as more pieces begin to fall into place. The sloppy frame jobs come across as childish, and it eventually comes out that the orphaned boy was influencing the butler in to carrying out his plan to become Bruce Wayne. Batman confronts the boy as he is defacing his parents’ grave, scratching the name of Martha and Thomas Wayne into not only the tombstone, but his own face. The disturbed boy is taken into custody and the mystery is solved.

Analysis: Batman and a murder mystery is a pairing that will never get old to me. Seeing the character go through the motions of getting to the bottom of the case and putting in the legwork is something I didn’t know I was missing in my life. I’ve been so caught up in the various mysteries of Rebirth and the engagement story and not to mention the fantastic action over in Detective Comics that I’ve lost focus on Batman as the Detective and become lost in some of the more grandiose aspects as of late. This was a return to basics that came at just the right time.

King’s dialogue was tight throughout as the quick pace of the story didn’t leave much room for exposition. He continues to provide great moments, such as Bruce acknowledging the murder of his parents will forever be scratched into his soul, and the way Selina had seamlessly been inserted in to life at Wayne Manor. The one concern I do have is that the character of Matthew is presented as a less calculating version of Thomas Elliott/Hush. With as deep a rogues gallery as there is in the Bat-Family, there are bound to be echoes of the various character types as time goes on, but I did find myself taken with this more outwardly unstable interpretation. Seeing the journey of Bruce Wayne play out over the course of this issue in the troubled Matthew really focuses in on how easily things could have gone very wrong.

Travis Moore’s work on art was impressive and really set a great time for the throwback nature of this story. With little to no action to lean on, Moore uses page layouts and subtly shifting camera angles to keep the reader’s attention. The standout in the art department had to be Giulia Brusco’s moody coloring. A variety of scene locations gave Brusco a number of opportunities to experiment with different palettes. The most impressive, of course, is the blue-hued take on Batman while in Arkham, reminiscent of the 90’s the on the character, which is right at home with the name drop of legendary creator/editor Dennis O’Neil.

Final Thoughts: This issue could easily have been a momentum killer, but Tom King has presented us with a simple, elegant story the likes of which we haven’t seen since probably the 2016 Annual or May’s Swamp Thing-centric tale. It was refreshing to have another self-contained story that focused more on existing traits than development and I hope King continues with these brief forays into classic story-telling.