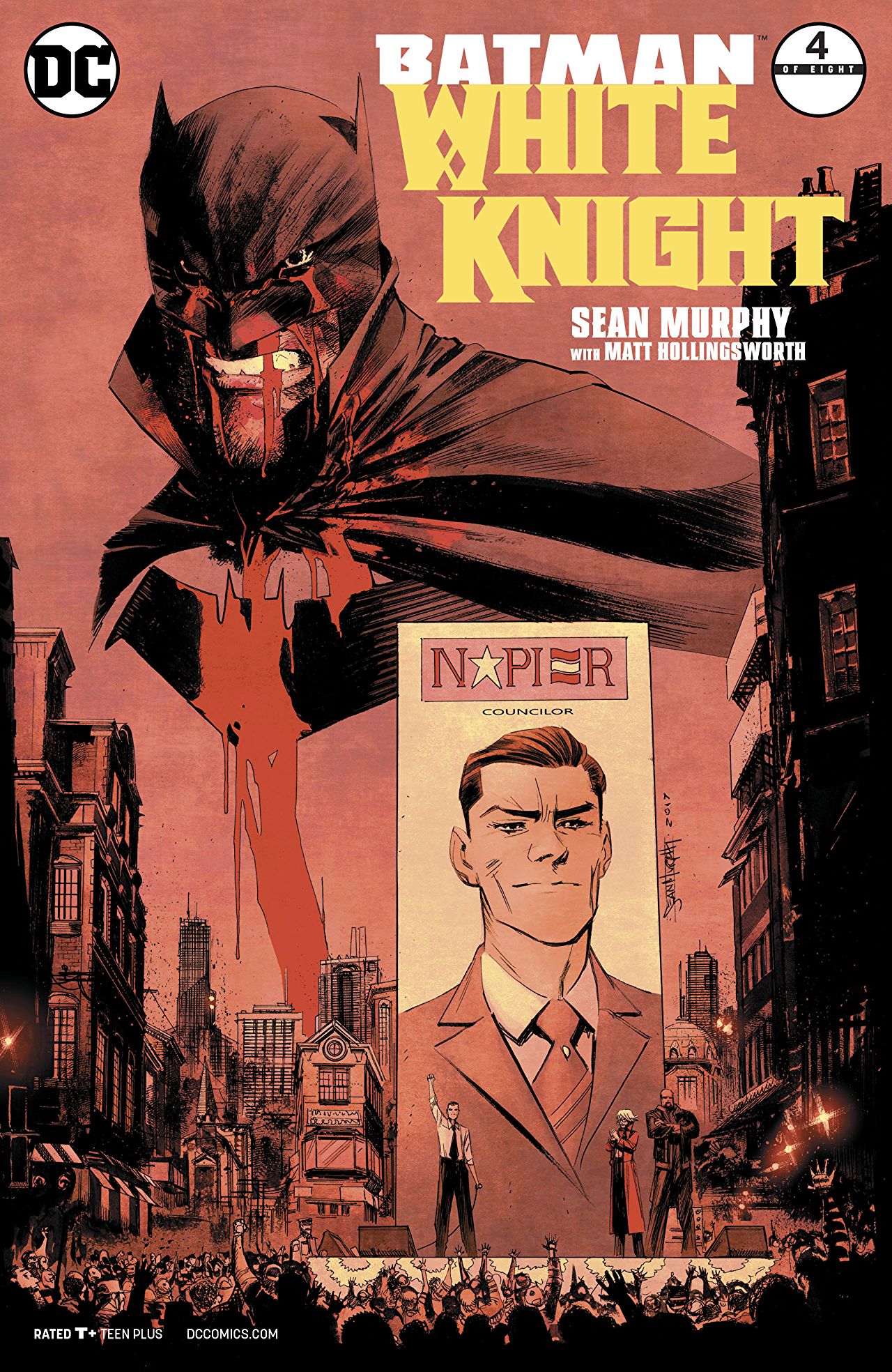 Overview: The battle for the hearts of Gotham escalates. Jack, Harley and Duke are hard on the campaign trail, the GCPD appears fractured and Batman seems increasingly irrational and aloof.

Synopsis (spoilers ahead): The issue starts off with the Mayor and Gordon having a private discussion in the Mayor’s car. The Mayor is ordering Gordon to arrest Napier but Gordon refuses to do so. The car arrives at a rally that is part of Jack Napier’s campaign to become elected as a city councilman. Duke Thomas is on stage making a speech endorsing Jack as a giant billboard of Napier is unveiled. The crowd yells its support of Duke as Napier gets up to speak. Napier delivers a rousing speech about what this means for Backport as the crowd voices its support. Napier decides to lead a protest march through the streets that makes the GCPD officers on site nervous. The line of protesters eventually comes up to the line of GCPD officers blocking their way and Napier, Harley, Duke, Gordon, Bullock and Montoya have a discussion about permits and the rights to march. This discussion is interrupted by Batman who forcibly takes down Duke and Jack while Nightwing and Batgirl look on. Bullock arrests Duke as the protesters become an angry mob that surges forwards. Napier quickly diffuses the situation by telling the protesters to stand down and that he will go peacefully.

As a Gotham TV program analyzes the commotion and what Napier’s campaign means to the city, Jack and Gordon are having a talk about what he will do once he is councilman. Napier is proposing that they redistribute the Batman Devastation Fund to create an elite task force that combines the vigilantes and the cops. Jack and Harley leave and meet Duke Thomas on the steps outside the precinct and Duke gently nudges Jack into taking Harley out on a date. Jack and Harley enjoy a night out culminating in Harley using Jack’s ring to propose and Jack accepts.

Meanwhile, Neo Joker is using the mind controlled super villains to lead an attack on the GCPD. Batman, Nightwing and Batgirl arrive and start fighting the villains while Neo Joker and Mad Hatter sneak inside to download all the GCPD files. Batman saves Gordon’s life in the fight and Gordon confronts Batman about how he doesn’t really cooperate or offer assistance to the GCPD before he storms off.

Back at Jack and Harley’s place, they discover that the mind control device they have is no longer functioning. Neo Joker, Killer Croc and Bane appear in the apartment and Neo Joker uses Croc to threaten Jack to get him to let the Joker out. Jack tells her that the romance wasn’t real and that he’s not the Joker anymore. Neo Joker is shocked at first but then leaves after reiterating that the Joker is still in there and that Jack won’t defeat her unless he unleashes the Joker.

Elsewhere, Gordon uses the Bat-Signal to summon Nightwing and Barbara. When they arrive, Gordon is able to convince them to listen to Napier for ten minutes. Napier outlines his plan for the special task force and shows them a high tech facility full of fast cars and crime fighting equipment. He explains that he was able to do all this by redistributing the Batman Devastation Fund.

Neo Joker, Mad Hatter and all the other mind controlled villains are back at Neo Joker’s place to go over the downloaded police data. Neo Joker explains how she came to meet the Joker and become Harley Quinn the first time. We learn her name is Marian Drews, that she was struggling with serious depression and that she was working at Gotham Bank when Joker decided to rob it. Mad Hatter eventually gains access to the secret files and discovers that Victor Fries’ father may or may not have been a Nazi who appeared to have some kind of partnership with Thomas and Martha Wayne.

Analysis: Wow, that was such an amazing issue that I hardly know where to begin. While the mystery and sincerity of Jack’s transformation has been an underlying theme of the whole series thus far, it’s in this issue where I’ve really started to fully believe that his transformation is genuine. He’s not perfect by any stretch, he’s always trying to find ways to score political points, but he also seems to want to make Gotham a better place. His partnership with Duke Thomas seems unlikely at first, but their association is mutually beneficial to their goals. Napier is continuing who use anti-establishment rhetoric to galvanize support in less fortunate socio-economic communities. I think part of the reason the character’s words resonate with the reader is because it’s so topical to what’s going on in the world today. The protest march that Napier orchestrates and the resulting confrontation with the police is a snapshot of how many of these events play out in our world. Gordon and Montoya seem ready to conduct themselves as professionals, but Bullock lets personal feelings cloud his judgement and he becomes hostile to Duke. Duke also aggravates the situation by using incendiary language towards Montoya who is just trying to help. Batman’s aggressive approach is the spark that sets off more direct hostilities between the two sides. Napier’s ability to calm the crowd and avert any causalities is a political win for him over Batman and also sends the message that violence is not the answer.

Batman’s relationship with Gordon also suffers some blows in this issue. This relationship has typically been a foundation of all Batman stories, but it really starts to come apart here. The impression I got of Gordon’s character in this issue is that he is like a man who was been asleep for a long time and is only waking up very slowly. Napier is offering him a better solution and Gordon is slowly starting to realize that Batman might be causing more problems than he is solving. He is understandably mad that Batman never shared any of his tech with his officers because it might have saved some lives. Keep in mind that earlier in the story Gordon was the most staunch, pro-Batman supporter on the police force. He seems to be gradually remembering what it means to be a good cop and prioritize the rights of citizens and the lives of his officers over his relationship with Batman. However, he still has a ways to go as he is still remarkably silent when all hell breaks loose under his nose as it did during the protest. The panel with the broken Bat-Signal on the ground between Gordon and Batman is an apt metaphor for where their relationship is heading in this issue.

Murphy continues to use the Gotham news show to showcase how events like the protest are endlessly dissected by pundits as well as how that shapes public opinion. Both the anchors offer differing opinions on Napier’s growing popularity, and their opinions are largely shaped by their own background and perspective of the world. It also illustrates how a vigilante like Batman ducks accountability for his actions because he never makes statements to the public. Napier’s idea to redistribute the Batman Devastation Fund is a win-win situation for everyone except Batman. Napier is able to earn goodwill from the police department, spin public perception in his favor and further demonize Batman as the true enemy of Gotham. Napier’s request that the vigilantes wear body cameras and use a GPS is all about holding them accountable. The fact that they can keep their identities means who they are is not as relevant as what they do. That being said, Napier’s suggestion that Batgirl would listen to Gordon hints at the fact that he might know more about the Bat-Family’s identities that he is letting on. Everyone seems to be starting to come around to Napier’s way of doing things. Even Batgirl and Nightwing are clearly tempted when they actually see the results of his plan at work. We’ve seen in the past issues that they’ve become increasingly disenchanted with Batman’s methods, and perhaps Napier’s way is offering them a more appealing alternative.

One of the best moments in this issue is Jack and Harley’s date. I loved how happy Harley is now that she is getting the relationship she feels like she has always deserved. They are a power couple that are working to improve themselves and their city. It’s easy to rejoice in their happiness even though my excitement is tempered by an impeding sense of doom that this is fated to fall apart before the end of the story. The art is absolutely incredible throughout the issue, but especially so on these pages. I could break it down further, but the artist himself has given an excellent breakdown on these pages on his Instagram page that are more instructive than whatever I was going to say.

Hollingsworth’s colors there are also great and Harley’s red really dominates the page. The shift in color between that intimate scene and Neo Joker leading an attack on Gotham on the next page is effectively jarring (in a good way!). Whereas Harley’s red evoked a feeling of love and excitement, the red framing in the backgrounds behind Neo Joker and Gotham on the page where she is leading her attack convey a sense of intense anger. The city looks like it is bleeding which is no doubt what Neo Joker has on her mind.

On the topic of Neo Joker, we finally get more information on her background and how she came to be associated with the Joker. Marian Drews meets the Joker at a very vulnerable moment in her life. She’s struggling with depression and self-harming which only gets worse after her boyfriend walked out of her life. In that vulnerable moment, the Joker seemingly offered her (albeit unknowingly) everything she had wanted. She talks about rediscovering a desire to live when confronted with a gun as well being happy with the attention the Joker showed her despite it being the result of Stockholm Syndrome. This is important because it gives more depth to her character and really humanizes her in the reader’s eyes. She’s definitely not the superficial and impulsive character she appeared to be in the second issue. She’s someone who struggled to find a modicum of happiness and is willing to do anything to regain it even if how she came to be happy is unhealthy.

Final Thoughts: Obviously the big cliffhanger from this issue is the revelation that Victor Fries’ father might have been a Nazi defector who had some kind of partnership with Bruce’s parents. I’m going to wait until the next issue to get more information before I comment on that further, but suffice it to say that I am highly intrigued. As it is, I think I’ve said more than enough. In my opinion, this is the strongest issue thus far in a series that is an instant classic in the Batman mythos. Don’t wait to read it.