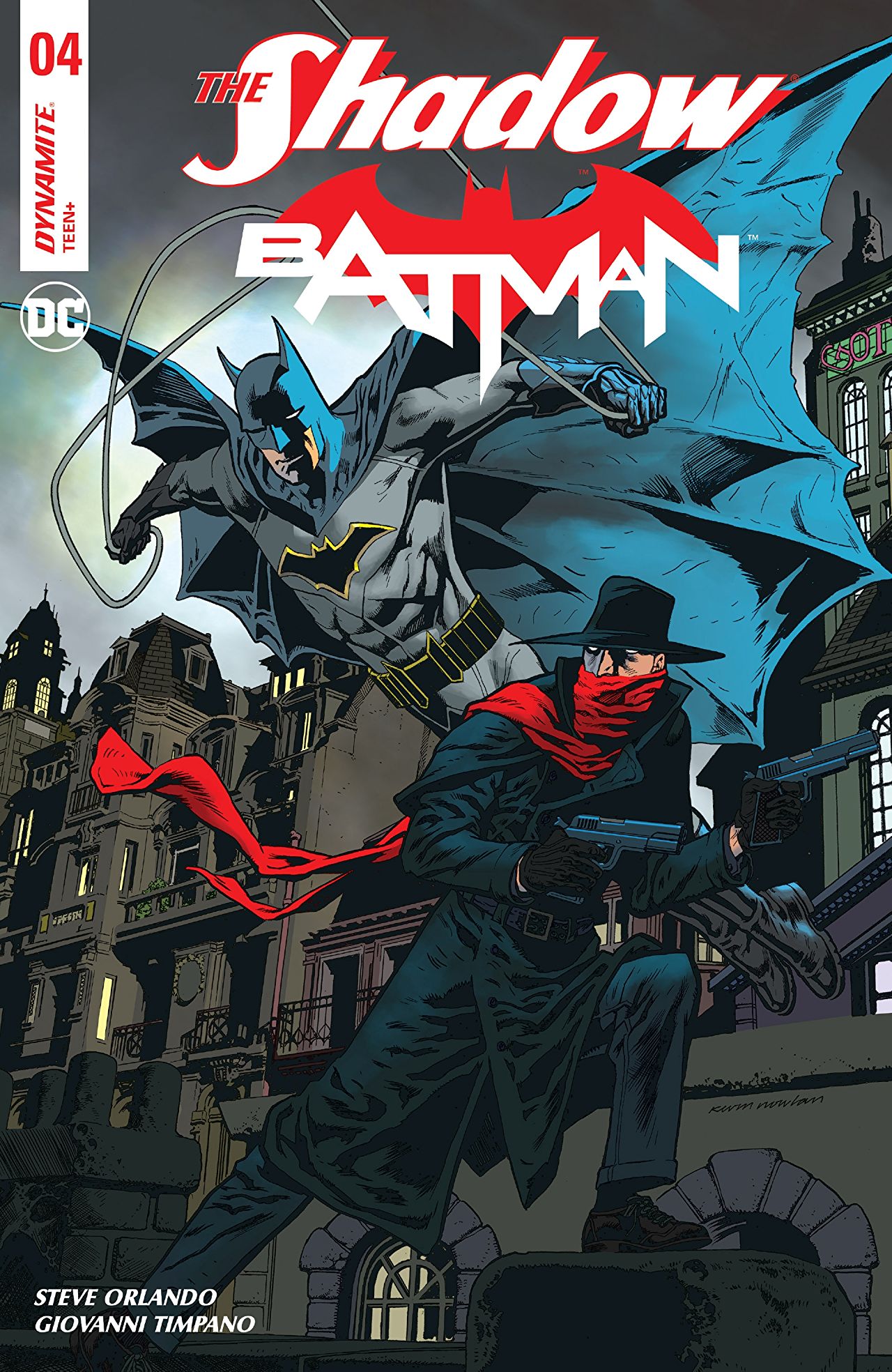 Overview: Robin continues to investigate the Secret Seven on his own while Batman finds himself under the control of Shiwan Kahn.

Synopsis (spoilers ahead): The issues opens with Robin breaking into a tech company campus in San Francisco where he downloads some files.  Meanwhile, back at Wayne Manor, Batman under the control of Shiwan Khan, has a gun trained on the Shadow.  Khan explains that Batman has been under his control since he died at Shamba La (which happened in the previous Batman/The Shadow crossover).  Batman is ordered to kill the Shadow, and as Batman tries to resist The Shadow knocks the gun from his hand and takes down Batman before being incapacitated by Khan.  As Khan drags away the Shadow’s unconscious body, he detonates a natural gas pocket below Wayne Manor, causing the mansion to collapse around Batman.  Batman activates a pair of rocket gauntlets from the Batcave and escapes to safety.

Robin examines the documents he stole, proof that the Silent Seven have been holding back decades of advanced technology, when his jet is taken over remotely by Ra’s Al Ghul and he crashes in the Northern Californian desert.

Batman regroups with Alfred at the Batcove, his underwater base under the Gotham Harbor.  Batman speaks to Alfred about how lost the Shadow has become since the destruction of Shamba La realizes that the Shadow may not want to defeat Khan as he is the only person who knows who the Shadow was before Shamba La.

Meanwhile, at an oil rig in international waters, Khan beat the Shadow while speaking to him about the Shadow’s shortcomings.

The issue ends with Robin being confronted by Ra’s in the desert, both with swords drawn.

Analysis: The last issue ended with the revelation that Batman may not have made it out of the Batman/The Shadow crossover alive and has been a reanimated corpse being secretly controlled by Shiwan Khan since that time.  This issue doesn’t really give any new information about this and preserves the mystery, which makes sense as there are still two issues left in this series.  I do find that at this point in the series that Khan’s powers should be a little more defined.  He can control the dead, but also can apparently control the living, as when he commands the Shadow to sleep.  It’s also not clear what the rules are for Khan’s resurrected henchman. If what Khan says about Batman being dead is true, is it only a matter of time before he drops dead again?  Is this something that needs to be reversed or corrected?  Or has Kahn essentially brought Bruce back from the dead and he’s now otherwise fine?  I’m not sure that the lack of clarity at the halfway point of the story is necessarily a bad thing as it keeps the mystery alive, but I do feel that these are threads that need to be tied up before the end of the series.

The Shadow continues to get more fleshing out in this issue.  I like the realization that the Shadow may have hit rock bottom to the point where he may be on a suicide mission to get back some sense of his humanity.  It’s an interesting take to have the Shadow be something of a lost soul in this series.  There doesn’t seem to be anything larger at stake in this story other than the souls of the two main characters and I like that writer Steve Orlando seems to be focusing on the characters.

Robin continues to be off on his own adventure in this issue.  There has been very little connective tissue between Batman and the Shadow’s mission and Robin’s story thus far.   While I think that Damian being off on his own is very appropriate for the character, I do hope that at some point soon Robin gets tied back into the main story because as entertaining as Damian’s story has been, it does feel a bit disconnected from the main plot.

The art by Giovanni Timpano continues to impress.  Timpano has a great sense of storytelling and motion and I love his kinetic layouts throughout the book, such as Robin’s break in to the tech company or Batman’s escape from a crumbling Wayne Manor.  There’s a great deal of action set pieces in this issue and Timpano executes them with style.

Final Thoughts: This continues to be a well written and expertly drawn series and I’m looking forward to seeing where this is going as it moves into its final two issues.