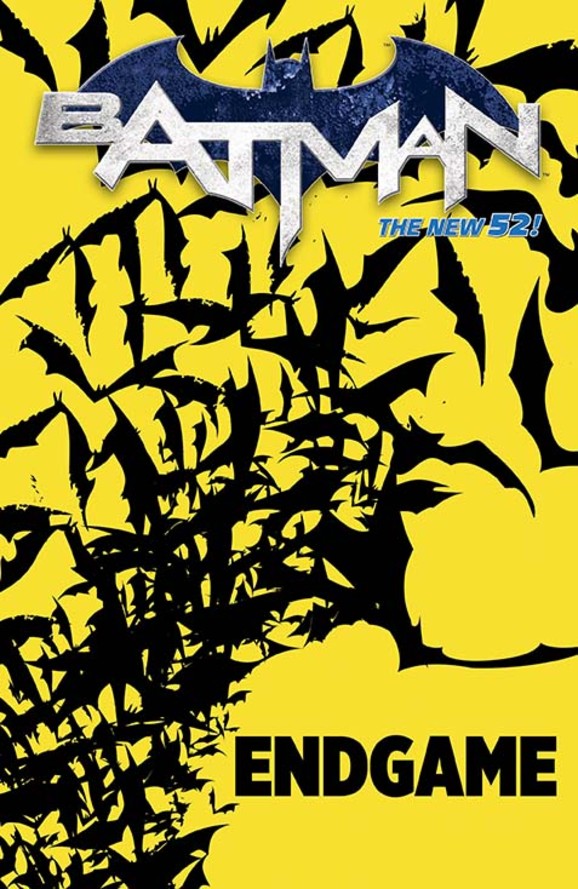 In a recent interview, Scott Snyder discussed plans for the upcoming "Endgame" storyline in the Batman title.  "Endgame" will begin in the just-solicited issue #35 in October 2014 with #34 being a one-issue interlude between this new arc and the "Zero Year" arc which has been dominating the title for a while.  Snyder did not give many details about the plans for the new arc except for the timing of the arc.

Many had expected that the Batman title would return to the same continuity as Batman Eternal and other TBU books once "Zero Year" was complete.  However, the book which has been no stranger to time jumping (issue #28 took place about halfway through the events of the year-long Eternal story) will do so again and take place after the conclusion of Eternal.  The current plan for "Endgame" is to be a six-issue arc that will end in March before all three of DC's current weekly titles perhaps in preparation for some new contiunity-wide event in April.  Read the following interview excerpt for more of Snyder's comments on the subject of "Endgame" and its timing.

Newsarama: Scott, after Zero Year, you've got a stand-alone issue. Is that to bring people up to speed with what's been happening in Batman Eternal, since you're moving up to present day in Gotham?

Scott Snyder: Yeah, but it's also just to take a breath. I thought I was going to do three or four [issues like this], honestly. I really believed it. And I said it, I think, a couple times. I was like, “we’re just going to go quiet for a little bit. Do a couple small mysteries with some of the rogues.” But I’ve pushed that back a bit in my thinking, mostly because we had this block of time before the move — when DC moves [offices from New York to Burbank in April 2015] — and I just saw this as, it’s Batman’s 75th anniversary, so instead of waiting to do this big story that we’ve been thinking about, why don’t we push that up and do that? You’ve got to go big for Batman’s 75th anniversary, right? So that was the idea. So this issue #34, with [art by] Matteo Scalera and co-written by Gerry Duggan, catches you up on a lot of the big changes that have happened in Eternal. And the thing that I would really stress, that's important to realize is that, when Batman gets back in August from the past, we're not jumping into Eternal's continuity. We're jumping to the end of Eternal's continuity. So there are going to be a lot of things that are shocking, that you realize… "Whoa! How did that happen?" And you're going to have to go see Eternal to figure out how things came to be the way they are.

Newsarama: Why the choice to go that route?

Scott Snyder: Our feeling was, we had the option to jump into mid-stream with Eternal and then try to change as that changed. Or we could go from the pastto the present, and just make the present the end of Eternal.

Newsarama: You and your jumping! You guys jumped forward for Batman #28, then back to the past, and now you're jumping forward again.

Scott Snyder: I know! But this is the future that is continuity now. You know, it's post-Forever Evil, it's post-Eternal. So I think it's fresh and new and different. The point is to always keep things exciting for Bat-fans, you know? We try to zigzag for you guys – like with "Court of Owls" being over-the-top, whereas "Black Mirror" was meant to be more of a detective story. And then go full-on horror with Joker. Go bright and adventure and post-apocalyptic, with no horror at all, almost, except for the Doctor Death part, in Zero Year. Just sort of colorful, sort of punk rock origin. And then zip back and do Endgame, which is a totally different kind of story for us, after the fact. So… we try to keep you on your toes! Greg and I have a mission, which is never relax. And it kills us! I mean, we definitely run ourselves a little ragged, meaning like, sometimes he gets mad at me; sometimes I get mad at him. Because I think we both push each other. But I feel so lucky to be on the book with him. And he's one of my best friends in life. And I learn so much from him. But that's our goal, is to make something for you guys out there that is the best we can do, and that challenges us as creators each arc.

Newsarama: So Batman: Endgame also takes place after Eternal is finished? Is it later?

Scott Snyder: Endgame takes place in the same continuity as #34. They both take place, basically, right after the end of Eternal. It's not going to spoil things in Eternal, necessarily. There will be a couple things where you'll be, like, how did that happen? But my feeling is more that what it will do is create, hopefully, a sense of intrigue about how these things came to be, and you'll read Eternal and see the missing pieces, for fun.

For the rest of the interview, read more here. Batman: Endgame begins in Batman #35 which hits stores this October.