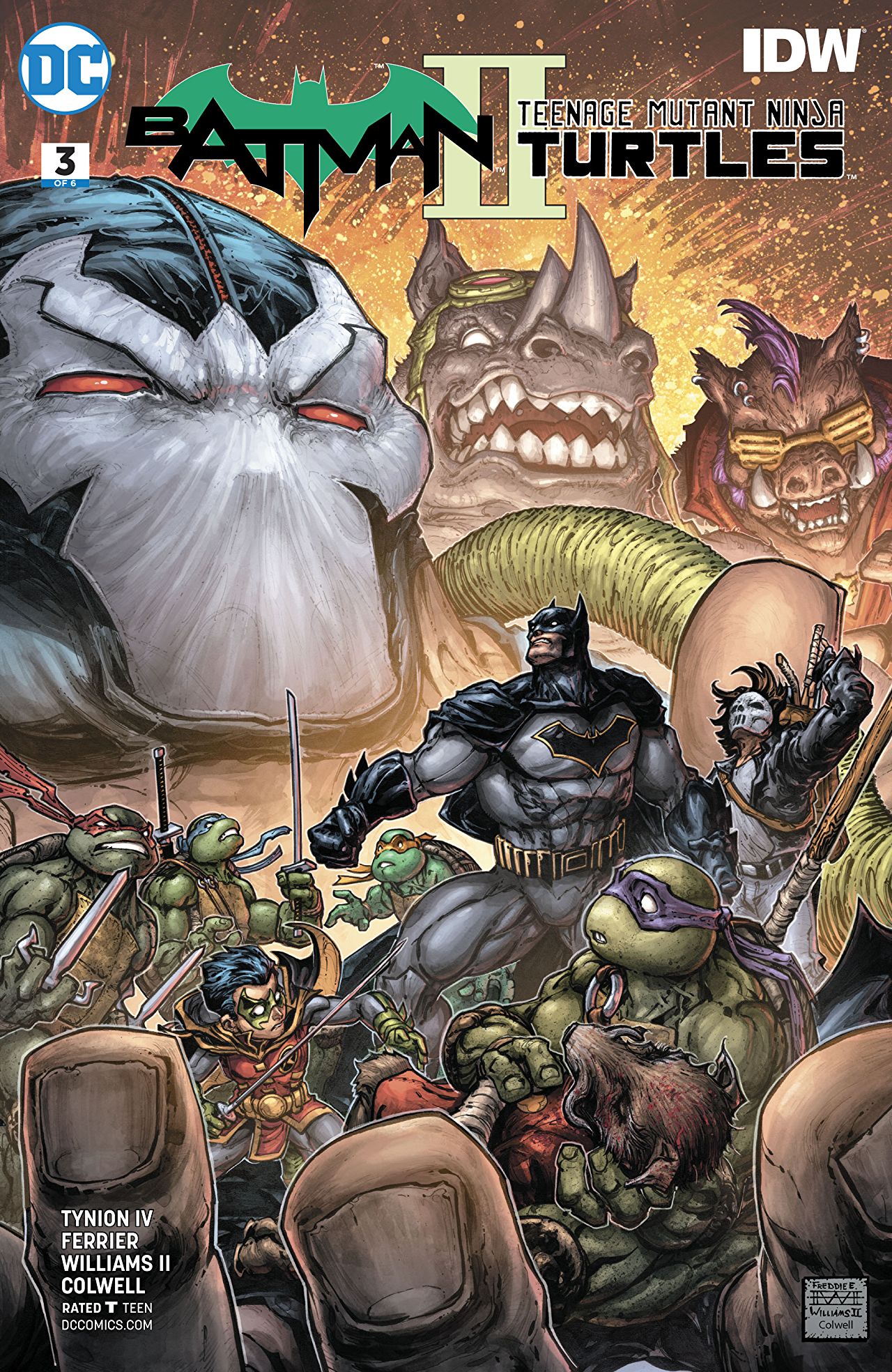 Overview: Batman tries to take advantage of a moment of weakness to take down Bane.

Synopsis (spoilers ahead): The issue opens with Robin going head to head with Michelangelo in a video game and loosing.  Damian then starts insulting Donatello for creating the problems they find themselves in, leading to Raphael getting fed up with Robin’s rudeness.  Meanwhile Batman, Splinter and Leonardo travel to Bane’s warehouse headquarters to find Bane overcome with withdrawal from the lack of Venom, with Batman planning to wait until Bane is at his weakest before striking and bringing him back to their own world.

Bane, however, is aware that Batman is watching him and Baxter Stockman arrives to give him an update on developing Venom, which he proceeds to test on Bebop and Rocksteady.  Back at the Turtles’ lair, Donatello is upset over feeling responsible for Bane’s presence in their world and is unsure of his place in world and is comforted by April.  The story then cuts to Robin and Raphael, who battle to a draw before being ordered to stop when Batman and Splinter return to the lair.

Batman, Robin, Splinter and the Turtles then move on Bane’s headquarters, with Batman interrogating Stockman while Donatello examines what Stockman had been working on.  Donatello finds that Stockman has been experimenting with both mutagen and a new substance which is revealed to be Venom, as a Venom-enhanced Rocksteady and Bebop crash through the walls.  Stockman is knocked into the mutagen and finds himself mutated into a fly-man.  The issue ends with Batman, Robin and the Turtles surrounded by Rocksteady, Bebop, and an army of Venom-enhanced Foot Soldiers as Bane enters the room and orders them to submit or die.

Analysis: This issue sees the series hitting it’s halfway point, and leads to Batman and the Turtles coming face to face with Bane and his army at the end of the issue.   I like how writer James Tynion IV has kept this series tight, with the story moving along quickly and never feeling drawn out.  There is an economy to this series so far that I appreciate.  Bane’s plan comes into focus in this issue and is a pretty simple one.  Bane plans on using Venom to build and army and take over.  Plain and simple.  I think too often writers tend to overthink things and make stories way too complicated. I think that Tynion does a great job of distilling down who Bane is as a character and has crafted a villain plot that feels utterly appropriate.  This story continues to be the best use of Bane in a story in years.

Robin and the Turtles continue to butt heads, with Damian continuing to be Damian at every turn.  As much as I like the father/son dynamic that is in play when Batman and Robin work together (mostly because we rarely get to see it these days), I don’t really find his interacting with the Turtles to be terribly interesting.  The Turtles seem to be another group of characters for Damian to condescend to and insult.   Don’t get me wrong, its exactly what Damian would do in that situation.  Tynion’s characterization is spot on.  I think my issue is that as much as I like Damian as a character, I would like to see him start to grow beyond just being a jerk to everyone around him.  It’s probably not the place to start making changes to the character in a limited inter-company crossover featuring two different licences, but I think its something that DC is going to have to face at some point, because as he stands, Damian can feel very one note.   That being said, I did enjoy the fairly brutal yet evenly matched fight between Damian and Raphael.

As a child of the 80’s who was first introduced to the Teenage Mutant Ninja Turtles via the 1987 cartoon series, I can’t help but enjoy the touches that Tynion has put in setting the story in the Turtles universe.  Having Rocksteady and Bebop now be under Bane’s thumb adds some fun into the story.  While it comes a bit out of nowhere, it’s always weird to me when they show a Baxter Stockman that hasn’t been turned into Brundlefly so I like that they found a way to incorporate the transformation into this story.

The art by Freddie Williams III has been consistently solid throughout this book.  His style is perfectly suited to tell a story about a bunch of villains being enhanced by steroids and I love that his Bane is an absolute monster.  I would love for Williams to take the art duties for a run on Detective when this is done, as he clearly handles a large cast of characters well and if for no other reason so I can see his take on Clayface.

Final Thoughts: This series continues to be a straightforward and wildly entertaining book that shows clear reverence for both sets of characters.  If you aren’t reading it, Damian would probably say something condescending and insulting here.