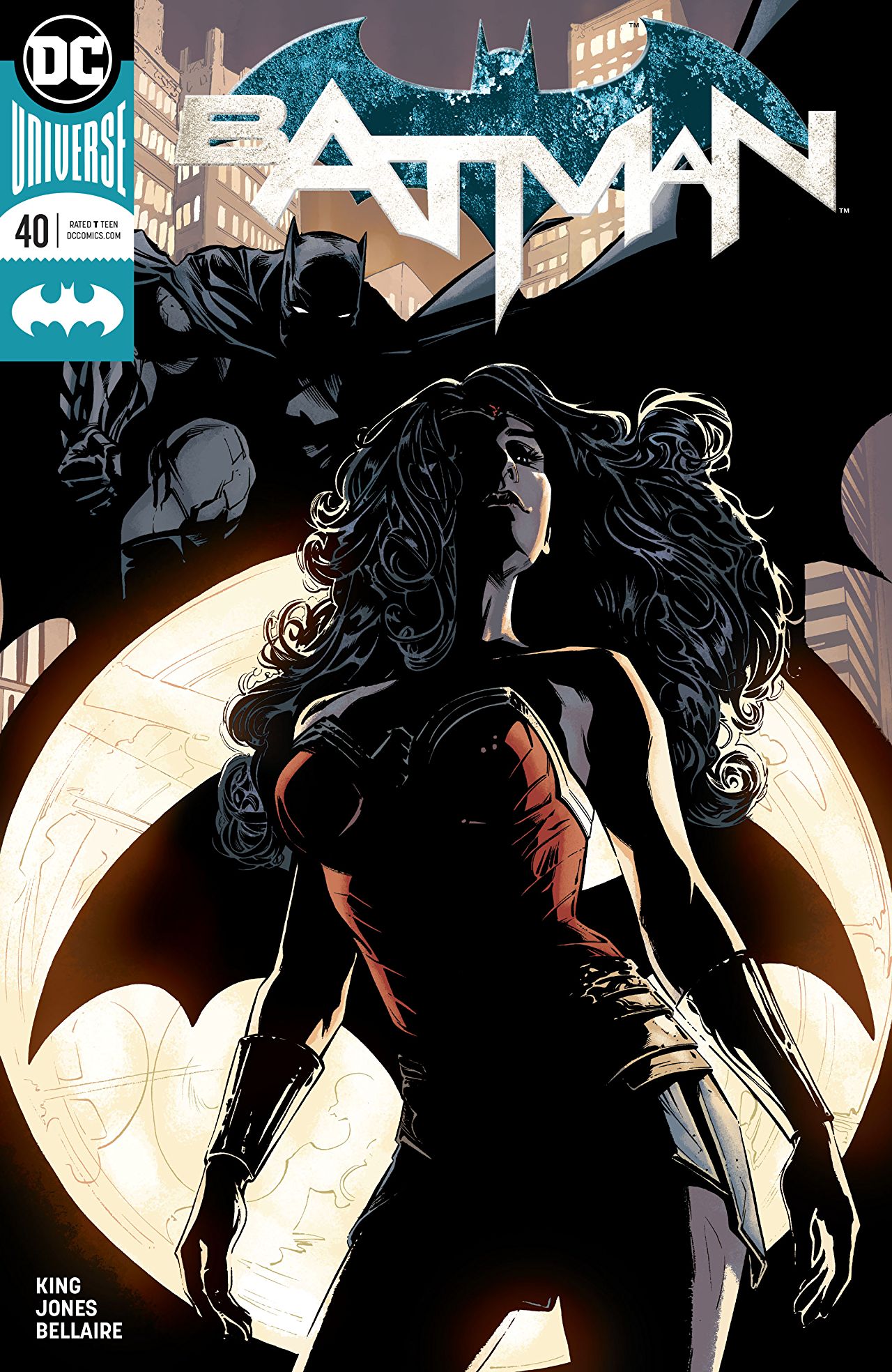 Synopsis (spoilers ahead): We open with Selina pinning down Julian (The Gentle Man) in an alleyway as he admits that he wasn’t completely up front with Bruce and Diana. We then cut to the two of them ringing a doorbell of a house off the city street. Selina reminds him to be brief and wonders how they can live separate lives when they are married. Julian tells her he doesn’t know how marriage is supposed to work. He just knows that he loves her and that he always will. Angela (Julian’s wife) answers the door, and once she recognizes him, she begins to cry as the two of them embrace.

In the light of a campfire, Bruce and Diana are about to give into temptation. Ten years have passed and they don’t know if they will ever return home. They wonder if the Gentle Man has tricked them… if they will ever return home… or if they will be stuck here in this realm for eternity, together. They both lean in for a kiss, when they pause just centimeters apart. They can’t, not ever. Bruce tells Diana that he loves Selina; he misses her. Diana tells him that she misses Steve as well. He is a good man. And Bruce should be good to Selina.

Angela and Julian have been catching up. Angela made full detective. Gordon gave the speech. Selina interrupts. She tells Julian they need to leave. Julian asks for another hour, maybe two. Selina asks how long that would be for them. “A decade or more.”

Julian and Selina are then seen being driven around (probably by Alfred, but it’s not clear). Julian apologizes, but if he had told them, they would not have accepted. And he couldn’t live one more day without seeing his wife. Selina tells him that she never saw love like that when she was growing up. She thanks him for allowing her to see it now. He tells her to not thank him now. Not when he’s being a fool and leaving her. “All right…” he screams. “Make it worth it!”

Bruce and Diana are pulled out of the realm and thrust back into their home. Selina is crying. Diana hugs Bruce. She tells him that the experience wasn’t fun, but that there were moments of fun. She thanks Selina for getting them out when she did. She also tells her she that despite her known criminal history, she thinks she is a hero. She also tells her that she is happy that Bruce has found love in her. Diana asks what she should tell the Gentle Man next time he needs a break. “Tell him he can go —“ Selina interrupts him.

“Tell him we are waiting and ready. But tell him this time… Batman’s wife will join her husband in battle.” Diana likes the idea and flies up, up, and away.

“Not bad, but not good enough.”

“Well, try harder.” The Bat and Cat kiss on a bridge.

Analysis: You could go back and look at past reviews of Tom King’s scripts in Grayson (Please don’t, my reviews were bad.) and see that I wasn’t initially a fan. However, the guy’s writing style has grown on me since then. I respectfully disagree with Donovan’s take on the last issue. Although King has moments of levity and decompression – as he does in this issue as well – his storytelling is extremely compressed. He clearly works within the confines of writing a twenty-page comic having intent on each page. It’s definitely a throwback style of storytelling that has seemed to die off in the current comic book landscape, but I’m more than willing to see it make a comeback. I’m definitely enjoying these shorter stories.

Although it says this is part four, it easily works as a two-part story that may be a piece in a larger tale. The story told here is dealing with the question as to whether Bruce is a good man or not. And this can be taken in more ways that one. I took it as an overall aspect of Bruce’s character. Being trapped in another dimension with Diana for thirty-seven years would be a test for any man to stay faithful. Heck, I have always liked the tension between Bruce and Diana in the Justice League cartoon, so the exploration of that in these two issues was nice to see played out here, while still remaining respectful to Selina. And by the end of this issue, Bruce answers the question. He’s not bad, just not good enough.

Joëlle Jones’ art here is gorgeous. I’ve never been exposed to her work before, and this was a great introduction for me. Her acting is spot on in the quieter scenes, and her action looked great in the bigger moments. I’ve seen many artists say you shouldn’t have the same camera angle for multiple panels, let alone for a whole page. I also have seen artists strongly suggest to keep to an odd number of panels on a page. They claim that it just makes the page look more interesting. Many of Joëlle’s pages had an even number of panels, telling those people where they can stick their dumb rules. I guess you can do those type of things once you are an expert in said rules. Jones constant risk-taking in these areas pay off for her here, adding drama, tension, or humor in the moments it needed it. Jones facial expressions are great and add to the scenes — working seamlessly with the script and adding to the storytelling. I’d really like to see Jones return in the future for more stories.

Jordie Bellaire’s colors are beautiful. What more can I say about her? Her work is so dynamic. In the past, I felt like I could always tell when Bellaire was coloring the book just by the tone. But now, she’s so versatile, she takes on a different tone that I couldn’t tell you who it was. I just knew the book looked great. The tones and palates she uses in various scenes add weight to the moment and help you adjust to the change in scenery seamlessly. Clayton Cowels’ letters were spot on. He had a lot of work to do with multiple dialogues, but he handled it well and the book looks great.

Final Thoughts: A fun two-part story with Wonder Woman, and delving into Bruce’s character and Selina’s psyche make this a memorable story. I look forward to rereading in the future.