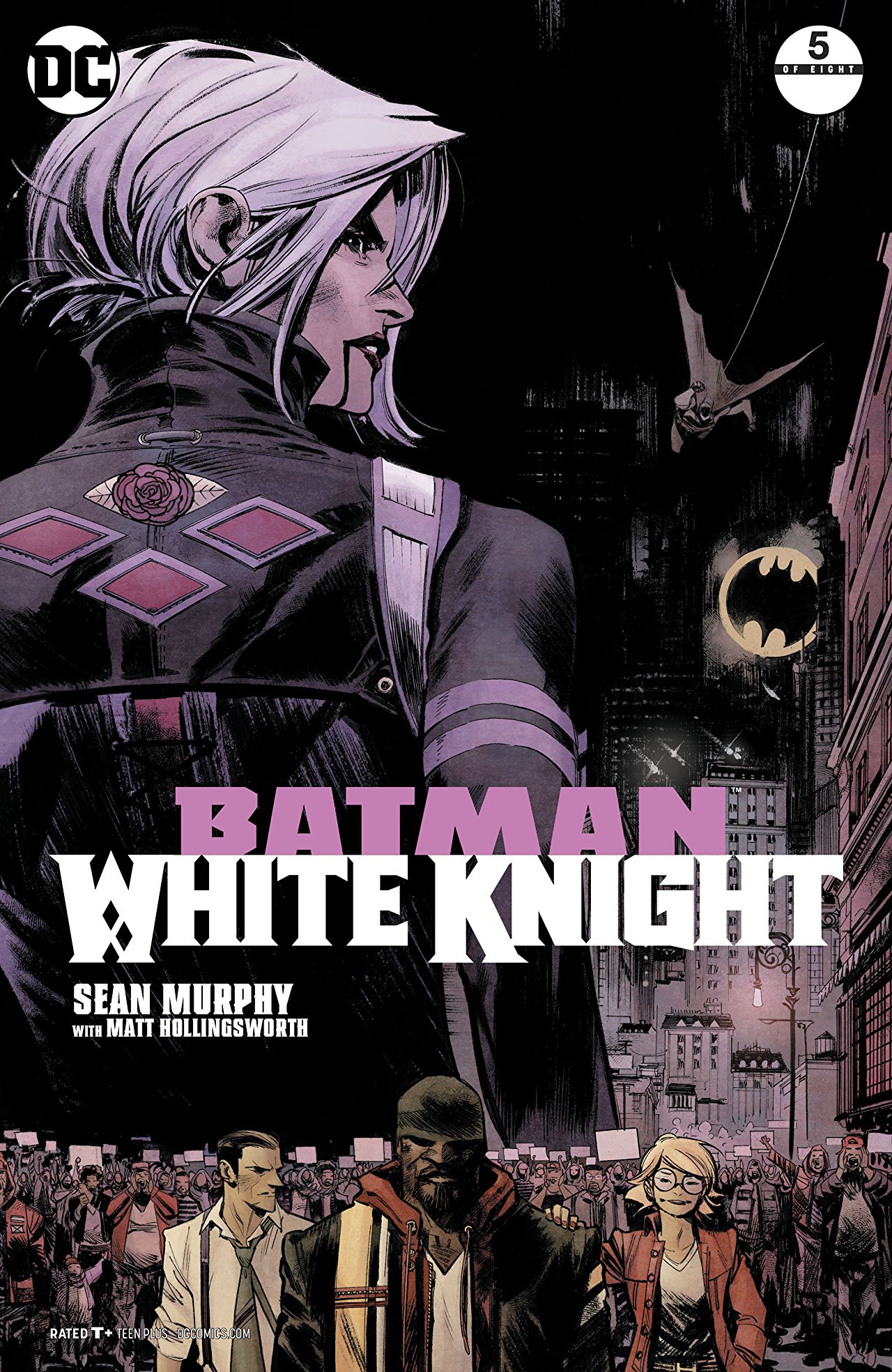 Overview: Neo Joker and Mad Hatter are hot on the trail of the Wayne-Fries connection and Batman finally pushes Gordon over the edge.

Synopsis (spoilers ahead): At the training area of the new GTO headquarters, Harley is giving Jack sparring lessons because Jack expects that he will have to beat Batman in a fist fight at some point. The pills he’s been taking are also a steroid that has built up more muscle on his body. Elsewhere, Batman is casing Neo Joker and Mad Hatter’s hideout looking for clues. He’s joined by Nightwing and Batgirl who have just come from talking with Gordon. Batman seems to be putting the pieces together in his investigation and is on the cusp of reaching the conclusion that the villains are being mind controlled. Batman declines to join the GTO and then he and Nightwing have an argument about Gotham and if Napier has really changed or not. Batgirl intervenes before things get physical and berate both of them for being stupid.

Batman leaves and goes to talk to Harley on the balcony of her apartment where he tries to get her to see that Joker’s plan is doomed to failure. He presents his (correct) theory on Joker intentionally destroying his own library just to gain a political foothold. Harley denies that Jack is still the Joker. She implores Batman to let it go because Jack is not a villain, he’s doing good for the city and that Batman and Jack both want the same things. Batman has a fit of rage because he thinks Jack has fooled everyone and he leaves. Jack emerges smugly from the shadows but Harley reiterates to him what she said to Batman; both Jack and Batman have become very similar.

Outside Wayne Manor, Mad Hatter and Neo Joker are scanning the estate because they are following up on the connection they uncovered between the Fries and Wayne families. Neo Joker uses a mind-controlled Ivy to destroy the surveillance systems and find a secret room within the manor. Inside the room, Hatter finds files belonging to the Fries family and the SS as well as some blueprints for hidden tunnels running underneath Gotham. Just as Ivy is starting to sense other rooms beneath the house, Bruce Wayne appears in his bathrobe doing a terrible rich guy impersonation. The villains take off in their getaway van just as Nightwing and another GTO car pull up. The GTO has the getaway van on their radar and starts a coordinated car chase across Gotham. The rest of the mind-controlled villains make an appearance but the GTO makes quick work of them. Just as the GTO is closing in on Neo Joker’s van, the Batmobile crashes the party and drives the van off the side of a bridge onto a big ship below. The ship crashes into one of the bridge’s support columns and Batman and Neo Joker grapple on a nearby rock. Batman rips open Neo Joker’s bag revealing Clayface’s brain with a Hatter mind control card in the center. This allows Neo Joker to land a kick on Batman, allowing Hatter and herself to retreat, and leaving Batman holding a picture of Thomas Wayne and Baron Von Fries.

As the bridge collapses, Gordon issues an APB for Batman and declares him a super criminal in the eyes of the GCPD. Batman returns to the lab where he was working with Victor Fries to cure Nora and asks Fries to explain the photograph. Victor reveals that he knows Bruce is Batman. Neo Joker and Mad Hatter explore the tunnels from the blueprints and discover an underground lab that appears to contain a giant freeze gun.

Analysis: This issue feels like we are getting close to the breaking point of this story. All the different plot threads seem to be coming together and I feel we are right on the cusp of all hell breaking loose. Whereas the last issue was more about exploring the political and public perception ramifications of the protagonists’ machinations, this issue is more about advancing the plot and letting some of the ideas play out. The focus shifts away from Jack and onto Batman and some of the supporting cast in the story. We get our first look at the GTO in action and they seem to be a cohesive and competent unit. Batman’s refusal to join and his desire to remain isolated outside the law is ultimately what drives Gordon over the edge. He has finally realized that Batman’s callous disregard for the safety and well being of Gotham and its citizens is unnecessary while Napier has offered him a better way forward.

I thought Batman’s argument with Nightwing was a great way of exploring the differences in their individual methods and personalities. Nightwing isn’t as beholden to Batman’s comparatively brutal methods and his anger at Bruce’s stubbornness really comes to the surface here. Just as she has always been in this story, Batgirl serves as the voice of reason mediating between the two of them. I also found Batman’s conversation with Harley to be very revealing. Harley is clearly aware that Jack’s plan isn’t completely above board, but she is willing to defend him because he is helping the city and because she legitimately thinks Jack has reformed. I don’t want to read too much into it, but there are small hints that Harley and Batman have a closer relationship in this world than they do in mainstream continuity. The anecdote of Batman sticking with Harley and buying her a new dress would almost humanize this version of Batman except it comes right after he admitted to helping her just so she could make the Joker less harmless. We are left to constantly question if Batman is doing good things for their own merits or simply for egotistical reasons. Harley also touches on what I feel is one of the central themes of this book when she tells Jack is very similar to Batman. If they could both put their obsessions and paranoia behind them, they’d realize that they both want what is best for Gotham. The “unhealthy” part of this desire, aside from the obsessions and paranoia, seems to be their wish to do it on their terms.

I assume Sean Murphy developed this story before the Telltale game came out, so he obviously didn’t copy anything, but there are some inadvertent similarities between the game and this story in how the Waynes are portrayed as being perhaps less than saintly. Here Bruce’s father appears to have a professional relationship with Victor Fries’ father who was a Nazi SS officer. I look forward to learning more about the backstory between the two families. We will probably get that in the next issue and it will undoubtedly have ripple effects on the conclusion of this story.

I love Murphy’s art in all his projects and the art in this issue is excellent as well. However, I feel like it is a slight notch below what we have become accustomed to in the first four issues. There isn’t as much detail in the backgrounds of some of the panels as a lot of them just have a solid, one color background. I get that the technique is used sometimes to showcase movement or to highlight certain things, but I just felt like it could have been a bit more complete. There is also one minor art error when Bruce is attacked by Neo Joker and Ivy. Bruce is clearly shown not wearing a shirt under his robe but then he is shown with his Batsuit underneath the robe on the next page. The colors of this issue are somewhat different from the previous ones, as this issue is a lot more orange. I went back through the first four issues and nowhere is orange used as much as in this one. Even the Gotham backgrounds in previous issues had more of a dark reddish or dark purple hue instead of orange. I got used to the orange eventually, but I felt it was a little jarring at first because it wasn’t consistent with what came before.

Final Thoughts: The book concludes with major changes to Batman’s role in the story. He has uncovered his family’s association with Fries, he is now an outlaw in the eyes of the GCPD and his allies are slowly distancing themselves from him. I have to think we are close to the scene we saw in the first issue where Napier visits Batman in a prison cell. I’m looking forward to learning more about the Wayne family in the next issue.