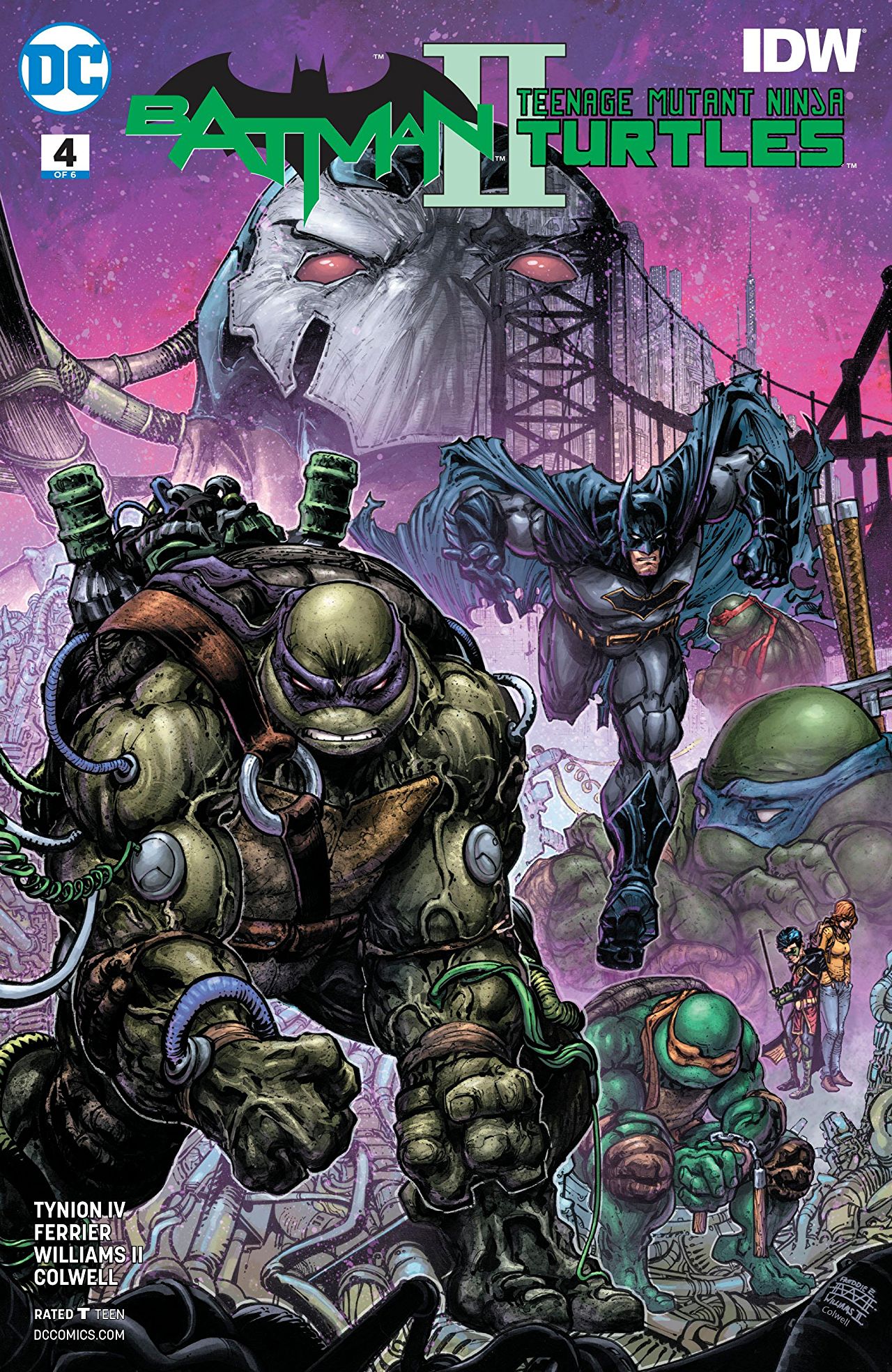 Overview: Batman, Robin, and the Turtles regroup after their defeat as Donatello makes a desperate move to defeat Bane.

Synopsis (spoilers ahead): The story opens with Casey Jones and April O’Neil working on Donatello’s trans-dimensional portal.  Batman, Robin, Splinter, and the Turtles are surrounded by Bane and the venom-enhanced Rocksteady, Bebop and Foot Clan.  Robin starts the fight off by planting an explosive on Bebop and a fight ensues.  The fight ends with the building coming down and the group escapes with Splinter, who is critically injured by Bane.

They regroup at the Turtles’ Lair, with Splinter in a coma.  Donatello reveals that he has taken a batch of Bane’s new venom formula and they debate whether they should take a dose to even the odds, which ends with Donatello storming off.

Meanwhile, Bane, consolidates his power, placing a giant Bane mask over the face of the Statue of Liberty.  The issue ends with Batman and the Turtles planning their next step as Donatello takes a dose of Bane’s venom.

Analysis: This was a very quick and straightforward issue that covers Batman and the Turtles first battle with Bane and the foot as well as the fallout from losing that fight.  It’s a very quick issue.  Maybe too quick.  Even with a little over half the book being devoted to the fight between our heroes and Bane’s forces, the altercation feels smaller than it should, as the series has been setting this fight as something of a collision course throughout the story so far.   I don’t want to be too critical of the pacing of this issue, as it is a little unfair to judge without knowing how the final two issues of this series are going to play out, but I can’t help but wonder if giving the battle and the aftermath each its own issue would have given the story more room to breathe or if it would have drawn things out unnecessarily.

That being said, the battle sequence is well executed.  Damian planting a bomb on Bebop feels very fitting and is a great reminding that Robin is probably the most dangerous one there.  The highlight of the sequence for me was the panel of Bane holding Raphael above his head.  It plays nicely into the history of Bane being most famous for snapping Batman’s spine over his knee and it had me wondering before the next page if the story was going to find Raph with a shattered … er..  shell.  Having Splinter be taken out to the story with an injury feels like something that we’ve all seen before, but its an easy way to raise the stakes for the Turtles and remove the moral compass that would keep Donatello from doing something stupid.

Speaking of which, Donatello’s arc comes into focus with this issue, as his feelings of inadequacy reaching a low point in this issue.  I have to hand it to Tynion.  I didn’t see the end of this issue coming.  Or at least I wouldn’t have if DC hadn’t decided to put a juiced-up Donatello on the cover.   They could have gone for an image of Bane, the Turtles, or the infinite supply DC has of Batman-on-a-gargoyle for DC to run with when choosing a cover for this issue.  Why would they go for one that spoils the end of the issue?   It’s a phenomenon that keeps popping up in monthly comics and one that continues to drive me bonkers.  That being said, I like this turn for Donatello.  This series has largely been about Donnie’s identity crisis and insecurities and I like the notion of Donatello making a desperate act in an attempt to make things right that could carry some real consequences for him by the end of the story.

Freddie Williams continues to deliver solid work, but I do notice that his backgrounds suffer or outright disappear throughout this book, most likely due to the demands of having to draw so many characters on each page.  I’d like to call attention to Jeremy Colwell’s colors, which have been elevating and enhancing Williams art consistently throughout the series.

Final Thoughts: I continue to really enjoy this series.  And while I did find this issue a little short, I also have to consider it might also be because I simply wanted more.  But seriously DC, stop giving away the end of an issue with the cover.