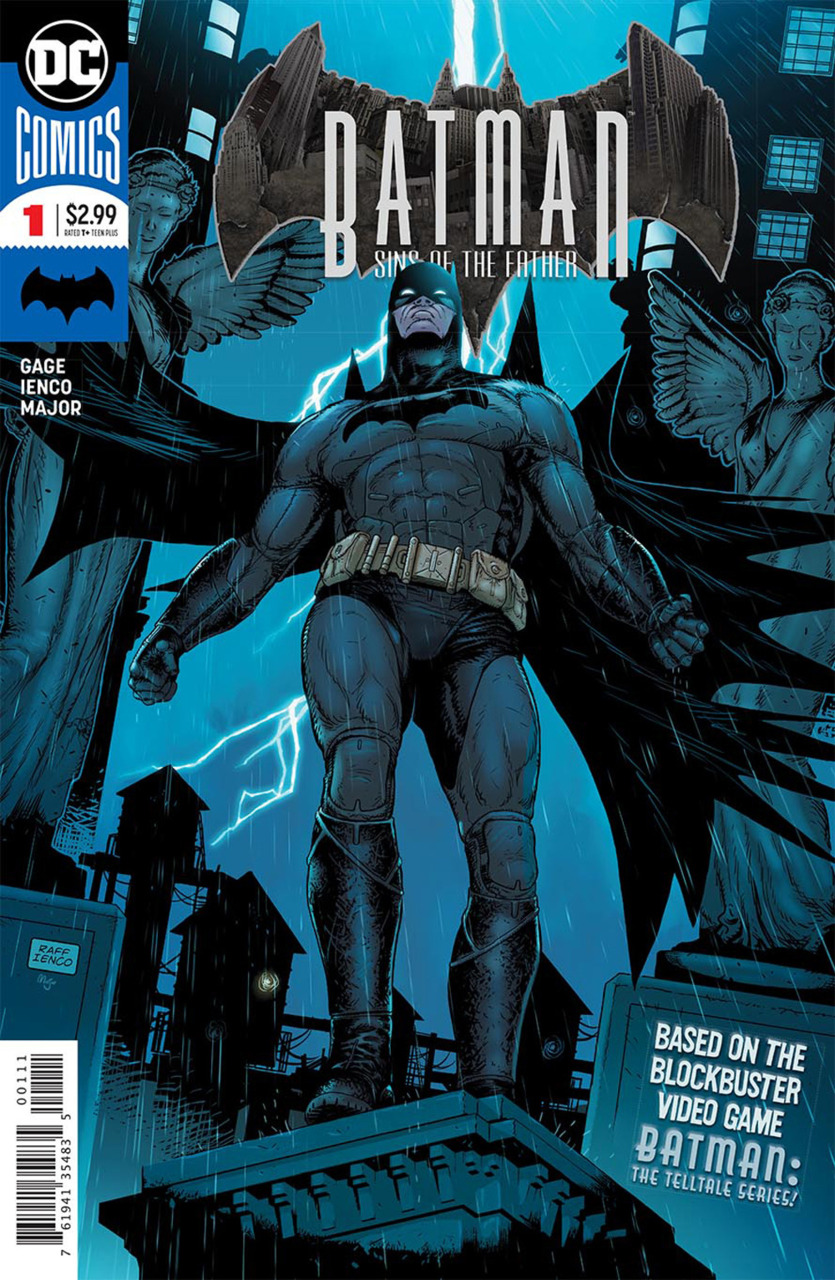 Overview: Following the events of Batman: The Telltale Series, Bruce is still reeling from the revelation that his father was not the good man Bruce thought him to be. While Batman is winning the trust of Gotham’s police force, Bruce’s attempts to make amends for his father’s crimes are derailed when a mysterious assassin strikes.

Synopsis (spoilers ahead): We open in an impound lot and on a firefight between the Zucco and Bertinelli families with GCPD in the middle of it. The two families are vying for control of Gotham after the death of Carmine Falcone. With the police pinned down, Gordon reassures his people that reinforcements are on their way, in the form of Batman. The Batmobile speeds onto the scene and is immediately flipped by a direct hit from a member of the Zucco family’s rocket launcher. Before they have a chance to gloat, Batman appears from behind them and takes them out with a mix of fisticuffs and well-timed batarangs. The Bertinellis meanwhile gain ground and unload a clip from an assault rifle directly into Batman’s back. He is down, with blood pooling around him.

Now it’s the Bertinelli’s turn to gloat on taking down Batman, too bad they didn’t notice the Dark Knight drop a few Bat-bombs that cause a stack of cars to topple onto the remaining gangsters. Batman makes a point to let Alfred know that the blood squibs he used to fake his injuries need a thicker consistency. He’s always thinking about the future. Batman leaves the scene with a member of the Bertinelli family, promising Gordon he’ll return him later. Flash forward to the GCPD Headquarters where Batman makes good on his word of returning the bad guy after learning that someone is hiring Falcone thugs and not taking “no” for an answer. Gordon mentions that the “agreement” he has with Batman is working out for both parties and that opinion is reinforced when a member of the GCPD thanks Batman for all his help. Gordon lets Batman know that winning the respect of that officer goes a long way in earning the respect of the entire force.

Back at the Batcave, Batman tells Alfred the Batmobile needs repairing and to get Lucius Fox’s help on improving the design to better take direct fire. Alfred reminds Bruce that Lucius is mainly focused on the dwindling profits of Wayne Enterprises, which means less money for Bruce’s nighttime activities. Alfred advises Bruce to put on his tux and work to regain the trust of the Wayne Enterprises investors who will all be attending an event at Wayne Manor.

At the event, Bruce talks with Regina, a member of the company’s board, about how uneasy he is having the event, especially since the last time he had such a party, it snowballed into Harvey Dent’s descent into becoming Two-Face. More importantly, it also was the time when Thomas Wayne was revealed to be a crime boss. Regina leaves Bruce to talk with an attractive blonde party guest, a woman who immediately serves Wayne with papers. He’s being sued by the families of those Thomas Wayne “drugged, drove insane, and committed to Arkham Asylum.”

We jump to the next day at Wayne Enterprises where a video of Thomas Wayne injecting an unknown drug into a woman while she pleads that she knows him, that their sons are friends. After the video finishes, Regina suggests that the board moves to file for bankruptcy protection and re-form as an entirely new company. Bruce disagrees and instead suggests that he work out a settlement with the families of payments to be made over time. This will prevent Wayne Enterprises from going broke, but he argues that this means that the families won’t be able to obtain the money he feels they deserve for the suffering caused by his father. Bruce mentions that while his father was not the man he thought, his mother and her philanthropic work should be where the company looks for inspiration to handling the current issue.

Back at Wayne Manor, Bruce and Alfred talk about the crimes of his father, and Alfred reminds Bruce that he can be his mother’s son, and do real good. When Bruce questions if his mother knew what Thomas was involved in, Alfred reassures Bruce that what she knew and what she chose to ignore, was due in part to the love she had for him. Alfred also believes that Thomas loved her as well, in his own way. Bruce vows to find out all that happened at Arkham and hopes that with Falcone out of the picture, the staff will be more open to filling in the gaps of the accounts of Thomas’ crimes.

Bruce then meets with the staff at Arkham who were around when Thomas was in charge. He tries to explain that no blame is going to be laid on their shoulders, that he just wants to know what happened. While some of the group are willing to give their account, one man claims that Bruce is laying a trap for them to take all the blame while Bruce and the company get off without taking any blame. The man who spoke out is then shot through the chest by a sniper. The sniper opens fire, but Bruce is able to get everyone down on the ground and behind cover. He leaves them in the office and changes to the Batsuit to try and find the assailant. He sees a man on a nearby building and tries to throw several batarangs at him, each one shot down. The assailant even shoots the grapple from Batman’s grapple gun with pinpoint accuracy. The gunman escapes Batman, but not before we get a look at him. Batman has just been visited by Deadshot.

Analysis: Batman: Sins of the Father is in a tough spot. The miniseries acts as a direct sequel to the first season of the Batman Telltale game while also setting up the second season, The Enemy Within. Being stuck in the middle, the comic should strive to be engaging while also not creating any continuity issues down the line. For the most part, this issue succeeds in setting up a worthwhile tale by focusing on what sets this universe apart from the main DC Universe, namely the reveal that Thomas Wayne was a crime boss, and, quite frankly, a monster. We are so used to seeing Thomas Wayne as almost saintly, a good father, doctor, and citizen who only wanted to see Gotham thrive. That has been a through-line of the character that has been translated into nearly every media containing Batman’s origin story. It is almost an unwritten rule, you don’t mess with Thomas Wayne’s characterization.

By creating a world where Thomas Wayne’s legacy is that of infamy, you also create a world where Bruce’s core belief structure is shaken. And while Bruce is broken down, Batman’s acceptance as a hero is on the rise. Writer Christos Gage deftly explores the parallel between Batman and Bruce, where Batman gains the trust of not only Gordon but other members of Gotham PD. Bruce meanwhile has his reputation shattered and is trying to rebuild both his family’s company and name to varying results. It’s a testament to the writing that the board meeting remains engaging and we remain genuinely interested in how Bruce is going rebuild his life. One of the main strengths of the game was that the scenes as Bruce Wayne were just as important as the scenes featuring Batman. I’m glad it continues on the written page. One addition that I really dug was Bruce’s insistence that Martha Wayne was a kind and genuinely good person, which goes a long way in informing the reader that Bruce was raised with those same value.

What also works is how the issue serves as a continuation of the game instead of rehashing what we’ve already experienced. We don’t spend time being reminded of Lady Arkham or John Doe immediately popping up. Rather than throwing in a bunch of easter eggs to the series, Gage uses what came before to push further, much in the way any new writer would do when taking over a book. It just so happens the first “run” on the series was in video game form. One story thread I hope is expounded on is the inclusion of the Zuccos and Bertinellis as a means to remind the reader that Gotham is experiencing a power vacuum.  Perhaps having one of the families being responsible for hiring Deadshot to take out the families and victims of Thomas Wayne.

As for Deadshot, let’s be honest. We knew the miniseries was going to include at least one new villain that we’re familiar with that has yet to appear in either series. Deadshot is an interesting choice as he has chosen to attack Bruce Wayne’s efforts, making him an adversary to both Bruce and Batman. As the game series is known for taking established canon and characters and turning them upside down, I hope this trend continues and we’re thrown a few curveballs regarding Deadshot. Just please don’t have him being somehow a victim of Thomas Wayne. That’s too on the nose.

Along with the strong writing, the art in the series was a pleasant surprise. I always fear that tie-in comics would scrimp on the art, with a lot of hastily drawn characters or obvious loss of detail. Happily that is not the case as artist Raffaele Ienco’s style is a mix of Frank Quitely and Mikel Janin with characters showing every bruise and wrinkle you’d expect. Batman’s design is classic, if not inspired, straying a bit away from the clean armored-look of the game and looking much more like a mix of cloth and kevlar, again showing signs of the constant battles that Batman fights. Characters are all immediately recognizable with Alfred in particular looking just like he does in the game. Establishing shots of Wayne Manor are also a particular highlight, with no detail spared, though sometimes dialogue-heavy scenes have rather boring, single-colored backgrounds. It doesn’t take you out of the scene but Ienco has proven he has an eye for detail so when it’s not there it’s a bit of a letdown.

Final Thoughts: Strong art and writing elevate Batman: Sins of the Father above what could have been a generic tie-in to a video game. The idea of Thomas Wayne as a villain helps to also make this a completely original story you want to follow to see what happens next.