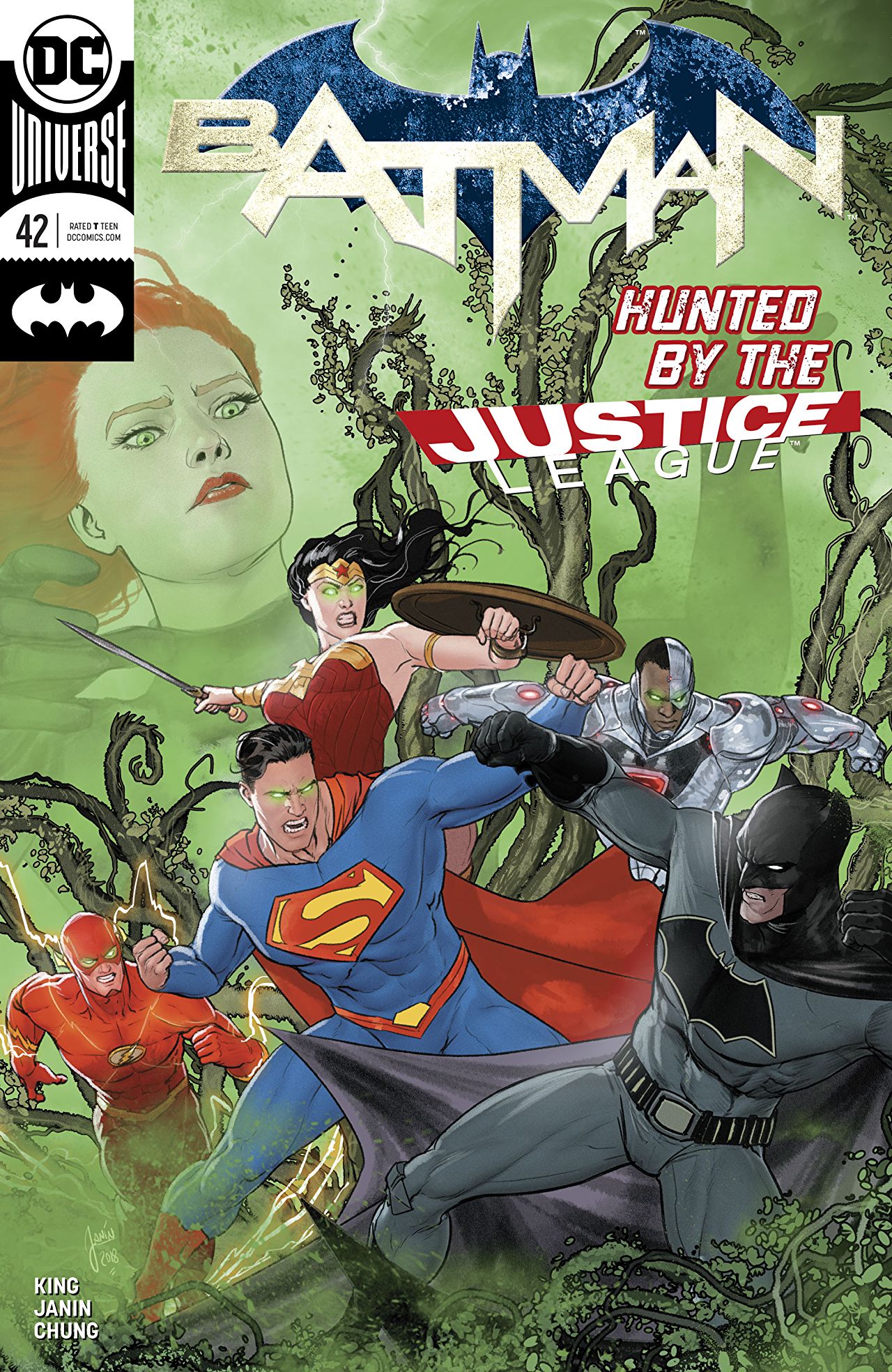 Overview: Ivy is constantly the third wheel to Bruce and Selina and they have finally had enough.

Synopsis (spoilers ahead): Three weeks have passed. Bruce and Selina sit inside the mansion. Superman watches them from outside. They watch the news and Ivy mocks them through the anchors. Bruce has had enough, and the two suit up and leave the mansion. Superman follows them as they go to Bat Burger. Selina sarcastically looks forward to their wedding. “Ivy could be your best man… And my maid of honor. Oh! And Ivy could give me away!… Maybe they could get Ivy to do the flowers… I never wanted a huge wedding. So how about we just invite Ivy?”

They leave the burger joint, and Superman continues to follow. Selina turns on the radio (which I found a little funny that Bruce even installed a radio in the Batmobile) and they play the number one hit for the third week in a row — the sound of wind rustling through leaves. It hits Selina, they are going to be dancing to rustling sounds, aren’t they? The two pull into a neighborhood and stop in front of a house. They get out and start walking toward one of them. Bruce has grown tired of being surveilled at all times. He asks Selina to come close. He has to tell her something and he doesn’t want her to hear. She leans close, and he whispers, “I love you.”

And then he places his fingers in his mouth and lets out a high pitched whistle, destroying Superman’s eardrums, and sending him plummeting to the earth below. They continue toward the house with Selina being impressed that Batman took out Superman so easily. Bruce remarks that it’s not Superman. Ivy doesn’t know how to use Clark’s powers the way that Clark himself does. Bruce warns Selina that they are coming. Speedsters. Three Flashes. Selina takes them all out before they can do anything. Again, Ivy doesn’t know how to use the powers as effectively as the people who have them do. Bruce opens the door to find an old woman in a rocking chair. Bruce asks if he’s here. She tells him that she is sending two Lanterns, Wonder Woman, and Gorilla Grodd along with a gorilla army. Bruce takes it that the man he’s looking for isn’t there. Ivy tells him that he should have stayed in the mansion and that she is trying to be nice.

We jump to Bruce and Selina suspended upside down from a skyscraper. Bruce has figured it out. At Bat Burger, he got a KGBLT… of which, two of the primary ingredients are in the name — lettuce and tomato. Ivy is letting people eat plants. But not a boy named Johnny Suntres, who has a severe allergy to greens. He’s not home. Ivy doesn’t want Bruce to see him. That’s how Ivy is controlling people, it’s in the food. Ivy gets angry. Bruce presses further. Ivy loses her cool and uses Superman to punch Bruce in the face, killing him.

Ivy explains to Selina that she brought him back thanks to a combination of science, surgery, and magic. She tells Selina that when she first got her powers she was scared of what she could do, but she’s not scared now. No one can stop her.

Bruce’s head and right eye are bandaged from the hit. He’s recovered nicely and is following the directions of his neurologist. She mentions that he looks surprised to see her. He’s not though. When Ivy needed speed, she used Flash. When she needed strength, she used Superman. It only makes sense that when treating someone with a severe head injury, she’d use someone with four degrees in neurology. After making her hit him that hard, this is exactly what he expected; it’s Harley Quinn.

Analysis: Tom King does an excellent job here setting things up, and then paying them off; something that Rian Johnson could have learned from when writing The Last Jedi (that’s right, I took the cheap shot). That is the sense I get when reading a comic written by King — every single scene he writes has a purpose to the story. Nothing is wasted. It may not be revealed right away, but there is a point to it. He also leads you in a way, where you begin to connect the dots. Making you feel proud of yourself when you start to piece everything together. Something a lot of writers do when writing Batman, is they give him outs all the time. Meaning they’ll write themselves into a corner and then Batman gets out of it because he has the exact gadget for the situation because he’s always prepared, but they do this while having Bruce be the narrator and it doesn’t work. It instead feels cheap. King writes in a third-person narrative, keeping you out of Bruce’s head. Doing this makes his tricks more believable and impactful. Like I mentioned earlier, though, he sows these seeds early and subtle enough that it doesn’t give it away, but does make sense in hindsight or in a rereading.

Mikel Janin’s art continues to blow me away. His consistency is incredible. His perspective is unbelievable. How someone can draw in a way that looks like a photo is crazy to me. The skyscraper towering above the rest of the city was amazing to look at. I seem to remember reading that before Janin was a comic artist, he was a architect, but I can’t seem to confirm that now. Regardless, the guy does fantastic work. And the full page spread of Bruce’s messed up face was horrific. I think I heard the crunch when I read it. That was a gruesome image, and it may well be stuck in my head.

June Chung’s texture is awesome. I love the variants in her colors. My only complaint is how the sky seemed almost unnaturally blue. It got better in later pages, but it was almost too bright. I’m also curious about the flat texture to Ivy’s hair. It’s an interesting choice. I like the way it looks, but it also stands out as being different and I wonder if that’s a bad thing. Clayton Cowles letters this book, and does a fantastic job. His placement is on point and like I mentioned earlier; I heard a crack when Superman punched Bruce in the face. Cowles gets some love for that.

Final Thoughts: A solid addition to the Ivy story. I like how King has set things up and paid them off. Let’s see if he sticks the landing. (Also, let’s bring in Swamp Thing!)